DENVER – Statistical analysis in sports is constantly evolving and ever-changing. The most recent push the sports world has made is in the field of analytics. In the realm of hockey, NHL teams are combining an analytical approach with video breakdown to gain a complete picture of production. However, in minor league hockey, analytics is still very much a work in progress.

Here at The Sin Bin, we want to take part in the growth of analytical research at the AHL, ECHL, and SPHL levels, and show those findings directly to the fans.

We’ll get to some of the Colorado Eagles analytic leaders here in a moment, but first, I want to take a moment to acknowledge Mac Moore and Sean O’Brien for imparting some analytics knowledge my way the past two seasons. Mac has written excellent pieces on PDO, advanced special teams statistics, and individual player breakdowns on Mark Auk and Matt Register. Sean’s stat compilation for the AHL, ECHL, and SPHL is truly a sight to behold. His charts and graphs on point shares, goals saved above average, and so much more is an education beyond belief. Please, visit his hard work and marvel at his analytical diligence.

Definitions for each category come straight from Sean’s website, so kudos to him for putting things in plain English for us ordinary folk to easily understand.

Now, without further adieu, let’s take a look at the 2019-20 Eagles from an analytical standpoint.

O’Brien’s definition of point shares states that they are an “attempt to determine how many of a team’s points in the standings each skater’s offense and defense was responsible for.” The stat helps break down an individual player’s usefulness in a more quantifiable way than just, say, a plus/minus rating or even looking at a player’s stat line in a vacuum outside of the context of both his team and the league overall.

Offensive point shares (OPS) are quantifiable by standard markers like goals and assists, but also include how much the team (and league as a whole) scores cumulatively. Defensive point shares (DPS) take into account events like shot and goal suppression, incorporating an adjusted plus/minus rating as well (If you’re interested in a deeper dive, here’s a much more extensive article on Calculating Point Shares).

Sean’s system requires a player to have 20 or more games played to qualify for a “label.” O’Brien has labels of first, second, third, and fourth-line forwards; first, second, and third-line defensemen; and starting or backup goaltenders. He based these labels on how many roster spots are available in the AHL as a whole on each of those lines.

Four skaters in the Colorado Eagles forward corps qualified as a “First Line Forward” under Sean’s own depth chart label for point shares. For those who like graphs, I’ll include one that shows where the majority of the Eagles ended up compared to the rest of the AHL (spoiler: pretty dang good). For those who prefer tables, have a gander below to see each Colorado forwards numbers regarding offensive, defensive, and total point shares. 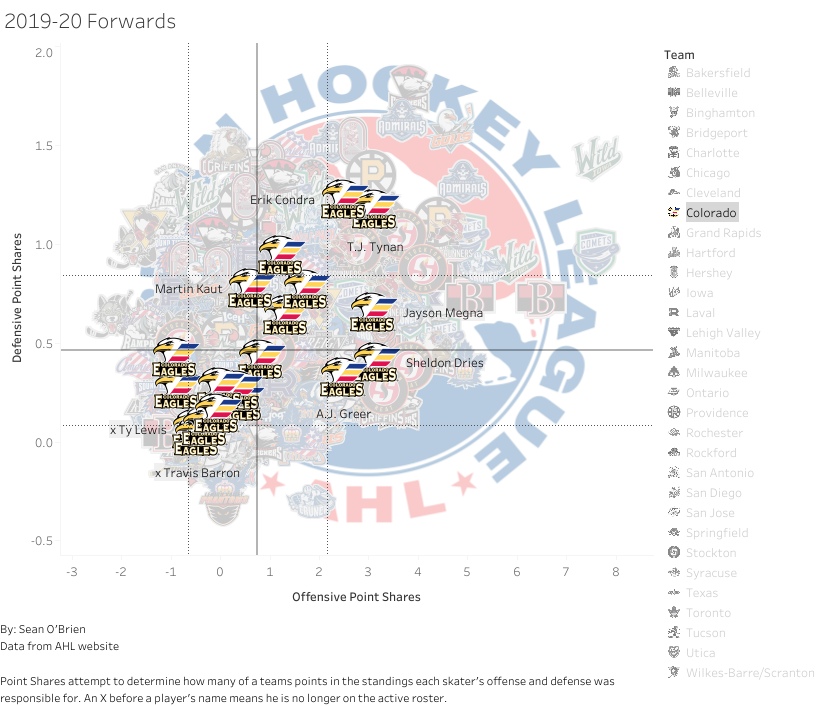 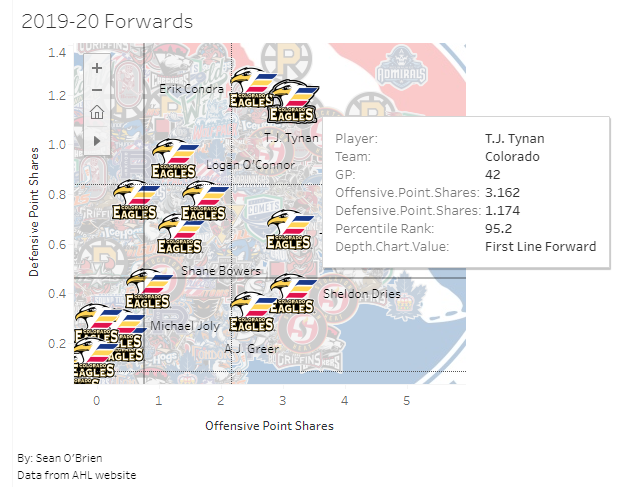 As the image below shows, Eagles d-man Jacob MacDonald posted one of the best point shares totals in the AHL this season for a defenseman. Those numbers may be a little misleading since MacDonald did play forward in certain situations for Colorado throughout the year. O’Brien even told me that because of this double duty, this drastically changes how MacDonald is evaluated by his model and may not be a good candidate to highlight here. Nevertheless, his 3.077 OPS plus 3.233 DPS for 6.31 total point shares are robust measurements for either a forward or defenseman. 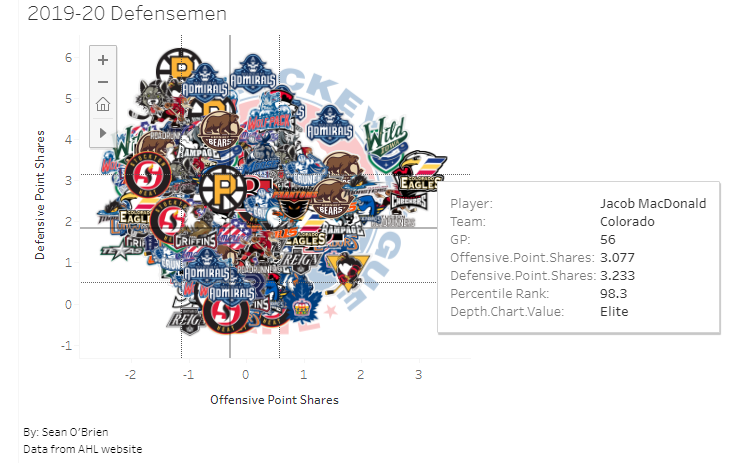 Here’s how MacDonald’s defensive teammates fared regarding point shares for 2019-20. 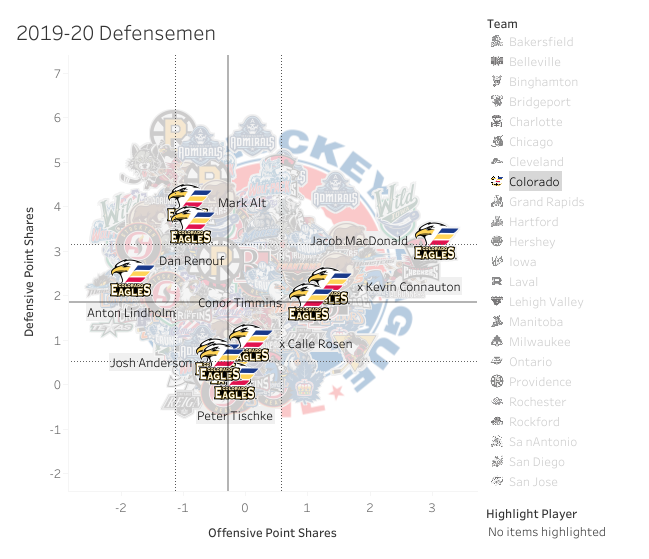 There are two main analytic measurements O’Brien uses for goaltenders in minor league hockey: Goalie Point Shares and Goals Saved Above Average. While Goalie Point Shares (GPS) have similar measuring factors as OPS and DPS, O’Brien states that Goals Saved Above Average “represents the number of goals that a goalie saved compared to a league-average goalie.”

Both qualifying goaltenders for the Colorado Eagles, Hunter Miska and Adam Werner, are considered starters. Miska scores close to the 95th percentile in the league, while Werner comes in a touch less at the 71st percentile. 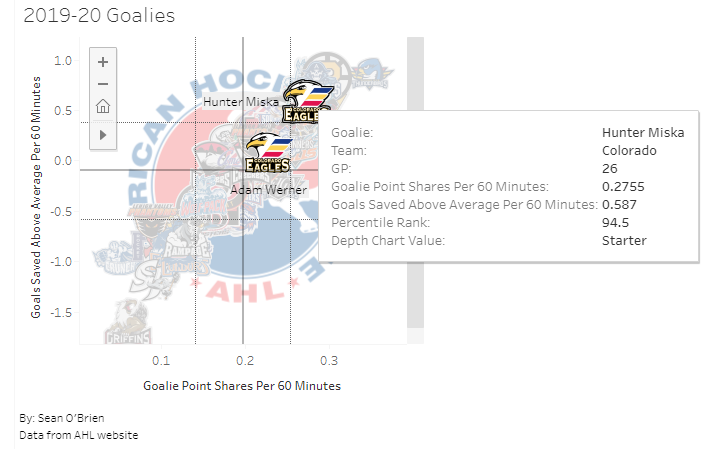 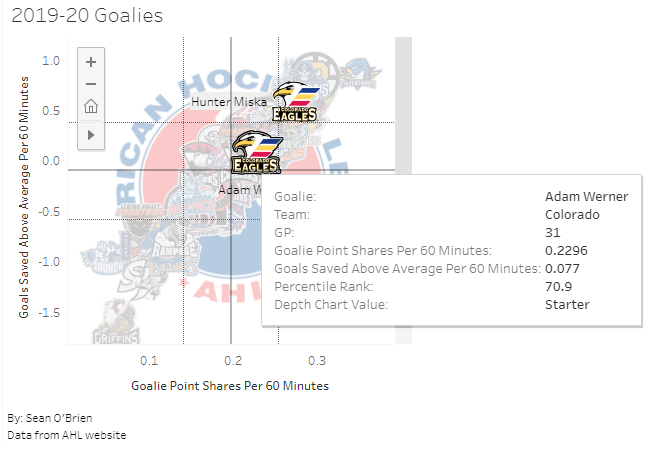 In comparison, look at how the league’s absolute best and worst qualifying goaltenders ended up on the spectrum of AHL goaltending analytics. 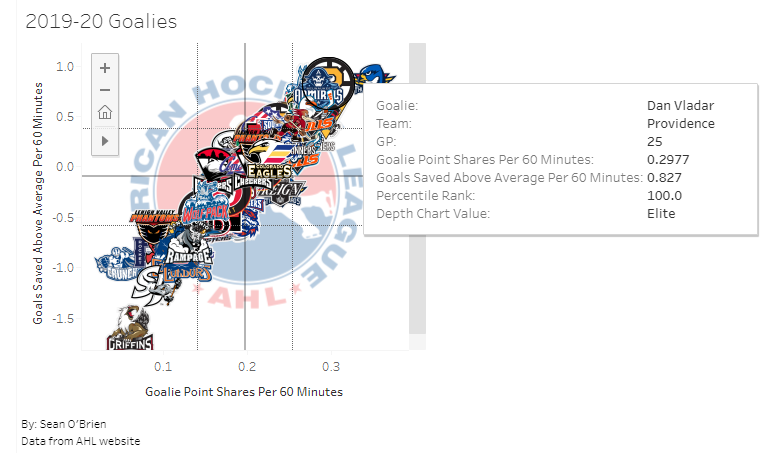 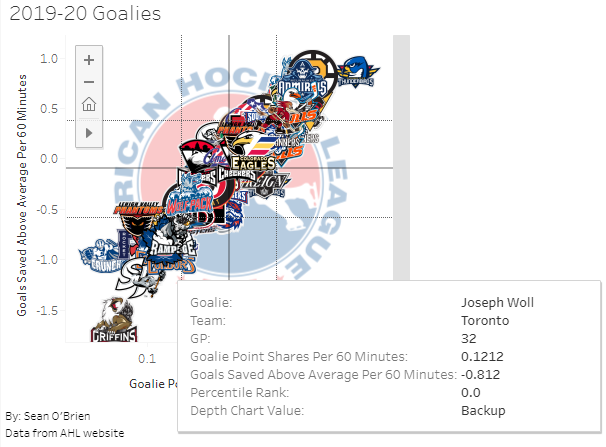 Last but not least comes the PDO analytic measurement. Mac Moore’s definition of PDO from his June 2019 article about the Cincinnati Cyclones is as follows:

Just like the ECHL, the acronym for PDO doesn’t stand for anything. Oddly enough, PDO was the username taken by Brian King, the creator of the metric, for the now-defunct website “Irreverent Oiler Fans.” The formula for PDO is straightforward and can be used to evaluate both players and teams. It is calculated by adding together shooting percentage and save percentage (PDO = SH% + SV%) [at even strength].

This stat is directly correlated with “puck luck,” as a team’s shooting percentage plus save percentage should come in around 100 (due to the fluctuation of both shooting and save percentage). A team below that (98 to 99) could be better than their record appears, and a team above that (102) is most likely better than they appear. Mac also stated that “On rare occasions, we do see very elite players and teams possess a PDO of 101 or even 101.5 percent. That is truly sustainable over the course of a season.” On the other hand, bad teams can also maintain a PDO of 98 all season. It all depends on consistency.

Since the AHL doesn’t track shot data by strength, Sean did his best to estimate what all 31 teams’ PDO would most likely be for 5-on-5 hockey using shot rates and special teams data. 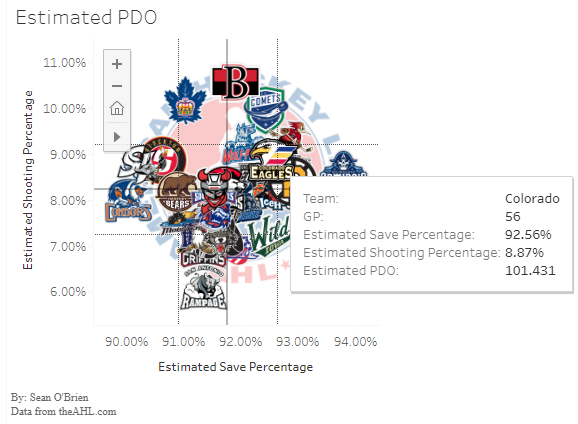 Milwaukee’s PDO of 103.123 indicates there could have been a falling back down to earth for the Admirals come playoff time, while Belleville’s 102.553 points to much of the same. To stay in the same PDO sweet spot where Colorado was in 2019-20 (101.487) could have pointed to a solid postseason run for the Eagles.

When it comes to either being down from five skaters or on the man (or two) advantage, the Eagles stayed pretty well near the middle of the AHL pack regarding special teams. While their penalty kill and power play percentages were average, Colorado’s penalty differential numbers were above average and beyond. The Eagles 3.714 penalty kills per game is close to the top ten in the league, while the 4.464 power plays per game ranks second only behind Tucson (4.948 PP/game). 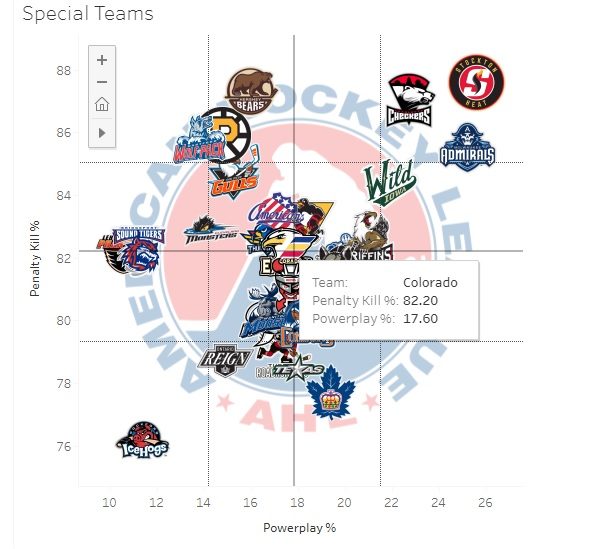 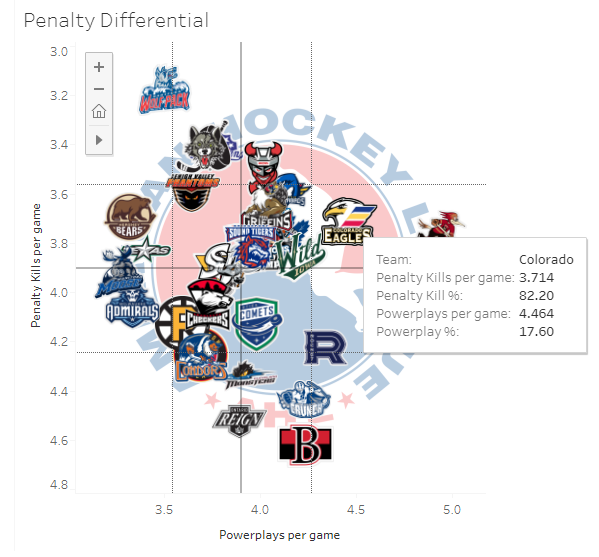