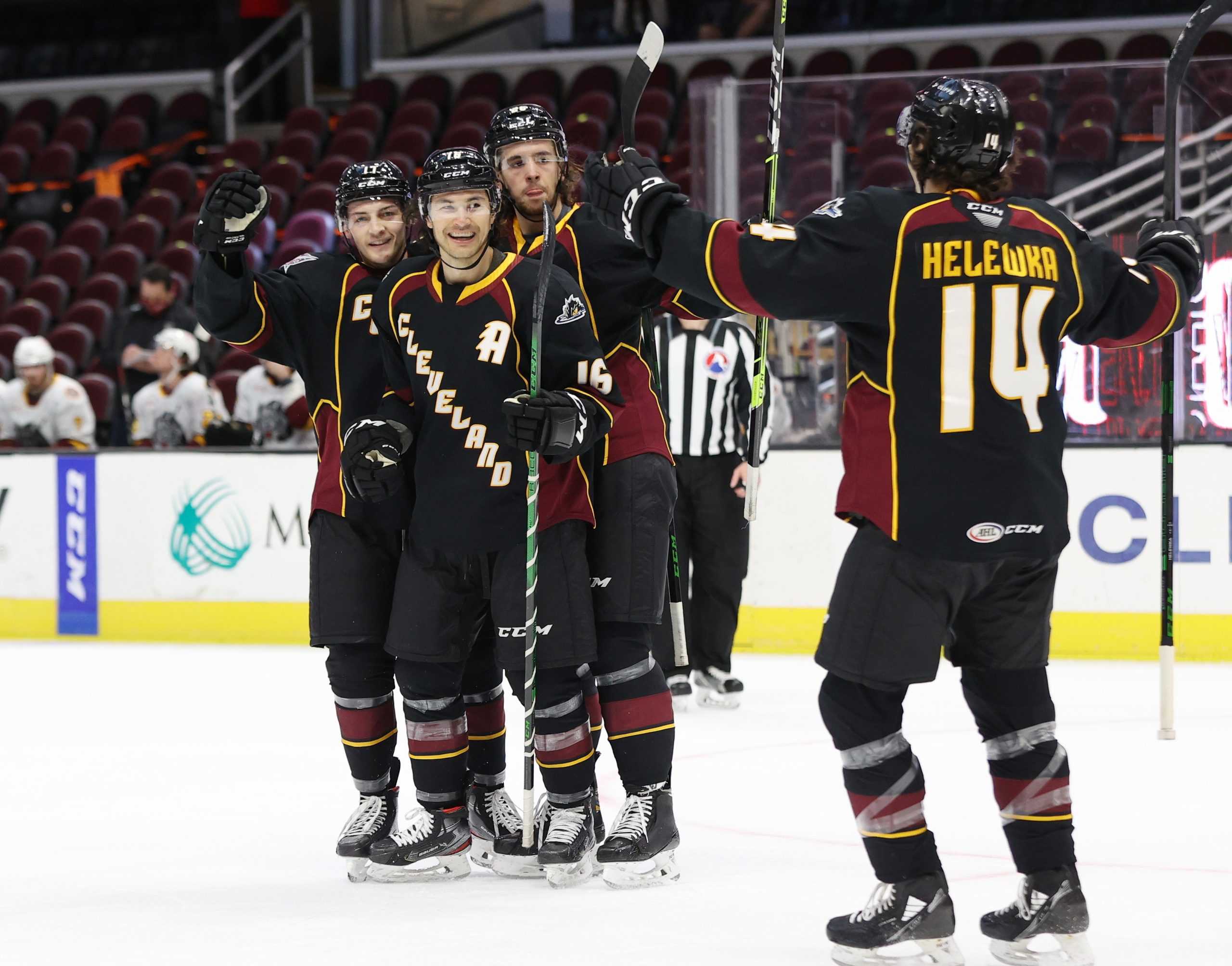 CLEVELAND – The 2020-21 Cleveland Monsters season was full of changes. Whether it was to their schedule or rosters, the Monsters had a 29 game season that doubled as a lesson in adaptability. Through it all, the team found ways to overcome a challenging season unlike any other we have seen in our lifetimes.

10th in the league and second in Central Division

Anytime you can finish in the top two in your division and top ten overall, it is quite obvious that many things went right. However, for the Monsters, much of their success can be tied to their skilled power-play units.

Finishing second in the league in power-play percentage at 26.9 percent, the Monsters were firing on all cylinders. Scoring on the power play mainly came by committee. Though, the units excelled thanks to the tenacious and alert plays of forwards Tyler Sikura and Carson Meyer and defensemen Thomas Schemitsch and Dillon Simpson. Sikura and Meyer led the team in power-play goals (5), while Schemitsch and Simpson each contributed seven power-play assists. Trey Fix-Wolansky looked to be, perhaps, the Monsters key player on the man advantage, but a season-ending injury in the early going derailed that train.

Cleveland's power play is on fire! Adam Helewka shovels it to Carson Meyer who fires the puck past Warm for the 2-1 tally.

While we can’t discount the contributions of the veterans, the 2020-21 Monsters season belonged to the rookies. Despite their young age and some jumping into the AHL earlier than usual, thanks to other leagues deciding to opt-out of the season, they showed they belonged.

In total, 16 rookies skated for Cleveland at some point in the shortened season, compared to 19 veterans. When looking at the end-of-season stats, some interesting figures stood out to me. Now, keep in mind, the rookies played 22 fewer man-games than the vets this season:

Sure, you could say some of that is due to coaches possibly giving rookies more favorable situations or pairings. After all, the more experienced players tend to get in on special teams and in clutch moments of the game.

Not this season. Head coach Mike Eaves placed a lot of responsibility on his rookies, especially Wyatt Newpower, Jake Christiansen, Ole Bjorgvik-Holm, Josh Dunne, and the aforementioned Foudy, Meyer, and Angle. Each player earned the trust of the coaching staff every game. They earned their playing time—no denying that.

What a save! Lekkas stretches out on a short-handed opportunity (delay of game – Wyatt Newpower) by Liam Foudy and Tyler Angle.

By the way- Lekkas is on a PTO. #ROCvsCLE pic.twitter.com/211LejaNbF

While the power play shinned, the Monsters penalty kill left quite a bit to be desired. They finished 16th in the league at 81.6 percent. While still not all that bad and a far cry from the San Jose Barracuda’s league-worst 74.0 percent, this is definitely an area that hurt their chances at taking the division title.

Far too often, the PK units let in quality chances from their opposition, wearing down their goalie. They struggled to get control of the puck, letting the other team set up camp in their zone. Tired skaters + goalie under siege = greater chances of a PK goal.

Brad Thiessen was under siege for the entire penalty kill. Anthony Lewis capitalizes on a tired Monsters PK to make it 3-1 with 4:00 remaining in the second.#CLEvsTEX pic.twitter.com/VXtmlE2av0

The penalty kill could have possibly been better if the team had not found themselves in the box so often. The biggest culprit? Monsters veterans. Over the season, they racked up 275 PIM, 152 more than the rookies. Granted, the top of the list is no surprise for long-time Monsters fans: Brett Gallant. On May 14th, the final game of the season, Gallant set the Monsters franchise record for most penalty minutes, passing Dan Maggio at 530.

All in all, the Monsters were a pretty solid team. However, stable leadership is something that was pretty lacking in the 2020-21 season.

Thanks to the implementation of the NHL taxi squad (may we never hear the term ever again), many of the longer-tenured two-way NHL/AHL players were practically out of commission for the AHL season. Others found themselves on the Interstate 71 express between Cleveland and Columbus. Now, some key off-season free agency departures will leave some glaring holes in the Monsters leadership core. Zac Dalpe, Ryan MacInnis, Stefan Matteau, and Adam Clendening have all found new homes. In goal, leadership is also running thin after the retirement of Brad Thiessen and the unfortunate passing of Matiss Kivlenieks.

Luckily, players like Nathan Gerbe and Gallant will still be around to show the kids the ropes of how to be professional hockey players. Unfortunately, the Monsters will always risk losing Gerbe to a call-up. In addition, newfound leaders Sikura and Bayreuther are also on two-way contracts next season, which may also cut the leadership heard even more.

Revisiting Preseason “Hot or Not” Prediction

Back at the start of the season, I made a “hot or not” prediction for the Monsters. Before I see how I did, let’s revisit what I said:

“Good question. Right now, I would give the Monsters a lukewarm. With having eight rookies and only eight returning players from last year’s squad, there so many unknowns that we can’t get a good temperature on the team.

On defense, the only returning player is Simpson. However, Cleveland has brought in some more experience in Bayreuther and Schemitsch. This will hopefully bring some balance to the rookies Christiansen, Brandon Fortunato, and Newpower.

Up front, the Monsters are getting a much-needed boost in veteran Sikura. Rookies Angle and Meyer will look to make an impact on the score sheet.”

It looks like despite not being able to gauge the team, the Monsters made the right moves, and players like Sikura, Angle, Meyer, Bayreuther, and Schemitsch lived up to my preseason expectations. Granted, Bayreuther served as a nice veteran pairing for second-year defenseman Andrew Peeke instead of one of the rookies, but he still brought the balance. Peeke struggled quite a bit until paired with Bayreuther.

Be prepared. The 2021-22 Monsters season should just be titled The Rise of the Rookies, Volume II. Rookies from throughout the Columbus Blue Jackets and Cleveland organizations will rise to the occasion again and lead the team. One of them will win Rookie of the Year honors.

Thanks to the departures of core players like Dalpe, MacInnis, and Clendening, along with a massive overhaul of the Blue Jackets, the door is open for the rookies to take over. Right now, there is plenty of room for the new guys who are hungry to prove themselves.

Overall, the 2020-21 Monsters season was pretty successful. They were in the race for the Central Division title up until the very end. For the Blue Jackets, you have to think they loved seeing what the Monsters brought to the table and how players on AHL-only deals took control of their season. A couple, Angle and Meyer, actually skated away with shiny new contracts from the Blue Jackets for this upcoming season.

While it was shortened and chaotic, the Monsters learned plenty of lessons and made great strides toward returning to their former Calder Cup Champion ways.