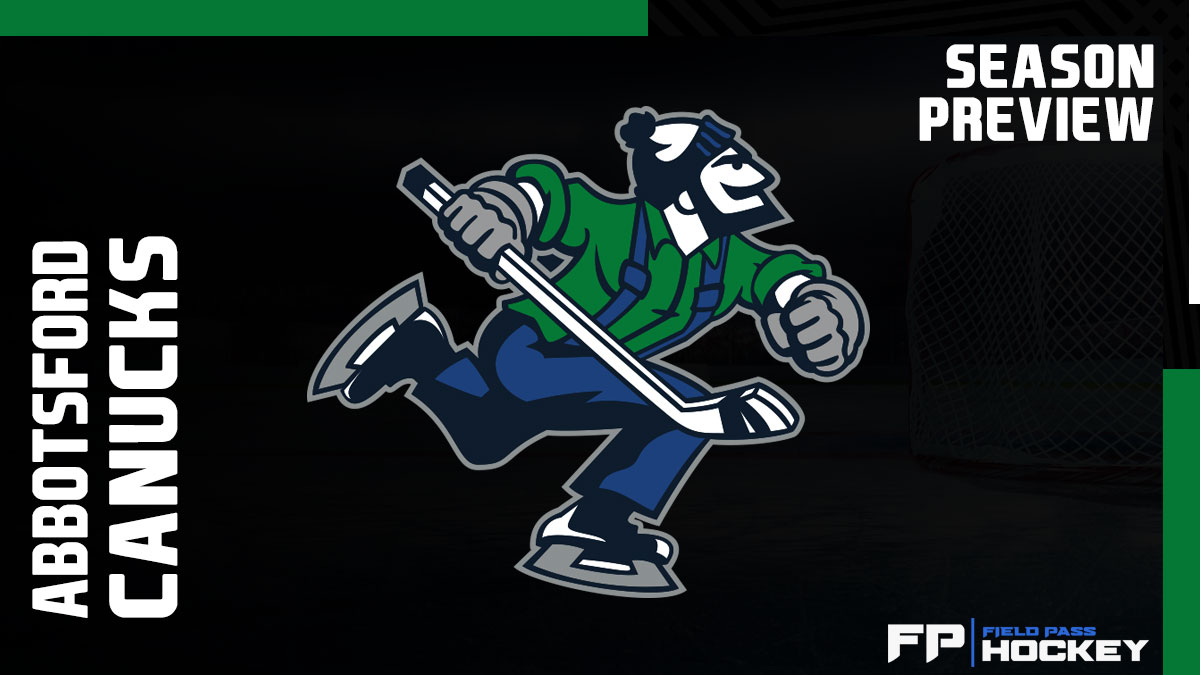 With the Vancouver Canucks moving their affiliate from Utica to one hour away on Highway 1, the Abbotsford Canucks will hit the ice for their inaugural season

VANCOUVER, BC – A big change is coming to the Pacific Division this season. AHL hockey is returning to Abbotsford, and this time, it isn’t an affiliate of a rival team. With the Vancouver Canucks moving their affiliate from Utica to one hour away on Highway 1, the Abbotsford Canucks will hit the ice for their inaugural season on October 16th.

With the start of the year not so far away anymore, the farm team is starting to take shape. From players joining from Utica to new signings, it’s an exciting time for the Canucks. They head into the season ready to challenge for the Calder Cup. 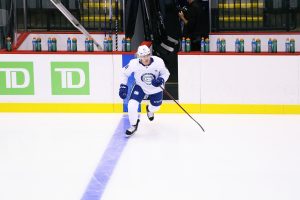 Here’s our season preview of how things look in Abbotsford.

While the Canucks are playing their inaugural season, it’s worth a look at the old affiliate in Utica. The team’s brass is coming over, from GM Ryan Johnson to head athletic trainer Roman Kaszczij. Bearing some resemblance, let’s look at how the Comets season went.

In an agreement with the St. Louis Blues, the Canucks shared the Utica Comets as a result of the COVID-19 pandemic. I’ll be looking at the team as a whole, but for the leading scorers and such, it’ll be a focus on Canuck property.

The Comets finished the 2020-21 season with 16 wins, 11 losses, and one overtime loss, good enough for 4th in the North Division and 12th in the AHL. There was not a postseason format adopted for the North, however, so no playoffs for Utica. They just broke even in goals for and goals against, coming in at 89-88 respectively.

Utica’s special teams were nothing to write home about, finishing 10th in powerplay percentage with 19.4%, while their penalty kill was bang average at 81.8%. It’s an important note to make that the power play cratered when Jonah Gadjovich was called up to the NHL, scoring a dismal 7.4% in the final 27 attempts.

As for leading scorers, Lukas Jasek led the way with four goals, 19 assists for 23 points in 28 games. Gadjovich wasn’t far behind, though, with 15-3-18 in 19 games. Sven Baertschi was the third-highest Canucks property scorer, landing 5-9-14 in 24 games.

And none of them are coming back this season.

Abbotsford was busy in the offseason, basically having to build half of their team from the ground up as they moved out west. Jim Benning helped out, though, with a plethora of depth signings meant to shore up Vancouver. The knock-on effect is that Abbotsford now has a ton of NHL tweener talent, with Johnson supplementing that in shrewd AHL level signings.

One of the acquisitions I’m most excited to see is Tristen Nielsen. I’ve covered him in a piece that you can find here, but it boils down to having one of the best scorers in the WHL joining the team. Nielsen’s a familiar name to anyone in the Greater Vancouver area, and he has more than a few fans excited to see him succeed. I believe he can become a huge player for the Canucks. His offensive game should translate well once he gets in a few games, and Nielsen has shown improvement at every level. I’m eager to see how he gets out of the gate in Abbotsford, especially after a good training camp with Vancouver. 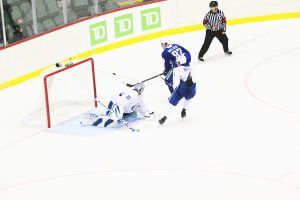 Chase Wouters is another name that will be key for Abbotsford’s future. Undrafted and unheralded, the forever underdog scored in his very first preseason game for the Vancouver Canucks.

Remember what I said about Gadjovich having sneaky good playmaking skills! Fantastic setup for his trailer, Chase Wouters!#Canucks
/7 pic.twitter.com/LAnenwsZJu

A character player who possesses skill and speed, Wouters offers more young leadership and potential to develop. I’ve also written a piece on him, but suffice it to say, he’ll be a name that Abbotsford fans should be getting used to seeing.

Alex Kannok-Leipert will also get a chance to showcase himself this season. With Brady Keeper going down with a tib-fib fracture that may see him miss a long period of time, the former Vancouver Giant captain will get opportunities to try and fill that void. An RHD himself, Kannok-Leipert posted an impressive 18 points in 22 games during his final season in junior hockey. As a defenseman trusted with big minutes, he boasts strong defensive awareness to go along with his offensive ability. While he might start off working his way up the lineup, Alex should be a key piece for Abbotsford for a long time to come. 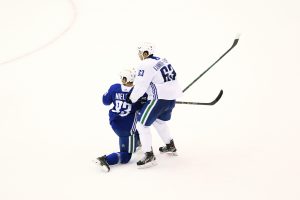 The battle for the last few roster spots in Vancouver has seen some casualties. A key departure that Abbotsford will sorely miss is Jonah Gadjovich. Claimed off waivers by the San Jose Sharks, this means that one of the Comets leading scorers won’t be joining the new affiliate in Abbotsford. It’s a key loss that will be felt, his net-front presence being a key catalyst for the power-play unit’s success. Even outside of that, losing an established leadership figure in the locker room is not ideal. Gadjovich came into the Vancouver training camp looking to earn a roster spot. His skating was noticeably better, and his audition just came up short. In all, it sucks to not see him in Abbotsford tearing it up for the Canucks.

Lukas Jasek will also not be coming back this year. As the Comets’ leading scorer, this really stings. He was trending upwards in his development with Canucks organization. A swiss army knife that really was able to slot into any situation, his loss might not mean a lot in the grand scheme of things but does remove some important depth from the AHL. Jasek basically did everything but score goals, and honestly, that’s something the big club could really use in a 4th line piece.

Abbotsford will start their season on the road for their first three games before returning for their home opener against the Henderson Silver Knights on October 22nd. The AHL will be playing back-to-back series for most of the year, reminiscent of a Canada West schedule seen in Canadian university sports. The Canucks will be playing their games against their Pacific Divison rivals and a couple of games against Canadian AHL teams.

The season will end on April 22nd, with the Canucks visiting the Stockton Heat. In an interesting scheduling decision, the Canucks will embark on a California road trip, playing the San Jose Barracuda, Bakersfield Condors, San Diego Gulls, and Stockton for their last four games. If it comes to that point, this sequence of games could be vital for a playoff push. 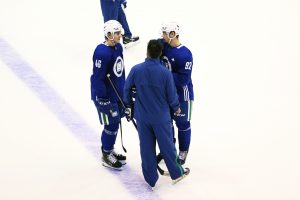 The first game in Abbotsford Canuck history will be played away from home, visiting the Condors on October 16th. Puck drop is a 7:00 pm, and it’ll make for a fun game to see just how the Canucks look. On paper, they have a team that could make some noise in the minors, but the game is played on ice for a reason.

Top Storylines for the Season

How does Mikey DiPietro perform as a full-time AHL starter? After a shambolic taxi squad year of him sitting around in Vancouver, DiPietro had a strong showing at Canucks rookie and training camps. Though he’s split starts in the 2019-20 season with Zane McIntyre, Mikey comes into Abbotsford as the bonafide starter. His development will potentially hinge on this year as he tries to make a case for a full-time gig in the NHL, especially with the closer proximity to Vancouver and the ability to work with Ian Clark. A proven competitor, DiPietro should be excellent in net and one to watch throughout the year. 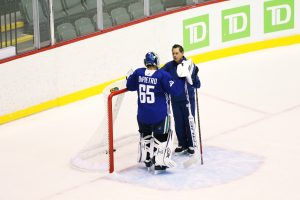 Jett Woo’s development is something that has been a sore sticking point of his career thus far. A poor D+1 season has seen his stock fall, and a rocky statistical start to his AHL career hasn’t helped fan perceptions. To me, he’s shown good defensive instincts and a high work ethic. The results of his development should be more apparent to fans now that he’s closer to home. More eyes will be on Woo than ever before, as the defenseman continues to add strength and power to his shot and game. This might be the season that he emerges as a top defenseman in the Canucks system. 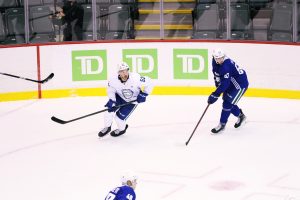 Jett Woo looks to take the next step in his development. (Photo: Stanley Lee/Field Pass Hockey)

Oh, the many tweeners. As mentioned before, the Canucks are having many auditions for their fourth-line roles. That also means that these players are on the bubble in Abbotsford too. Already, we’ve seen Gadjovich lost to waivers and Will Lockwood returning to the AHL after a very strong training camp. These options will probably get a lot of the starring roles in the minors, and they’ll be ones with something to prove. The chance to break into Vancouver could be one of the major motivators for them to perform day in and day out and could spark Abbotsford to something special. 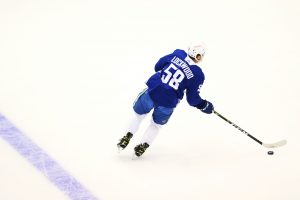 Lockwood had a strong showing in camp and preseason but will start in Abbotsford. (Photo: Stanley Lee/Field Pass Hockey)

The Abbotsford Canucks will finish in the top 10 of the AHL, make the playoffs, and reach the Calder Cup finals. This team bears a lot of similarities to the 2015 Utica Comets, in my opinion, and honestly, this area has been starved for a successful hockey team. A run to the finals will do a lot in getting a strong following.

Now, another prediction. Mikey DiPietro will finish the year with a goal-against-average over 3.00. It’s possible, but I really don’t think it happens with how good he is and how good the d-core is in front of him.

How do you all think the Canucks will do this year? Vote for what you think will happen, or tweet at me to discuss more!