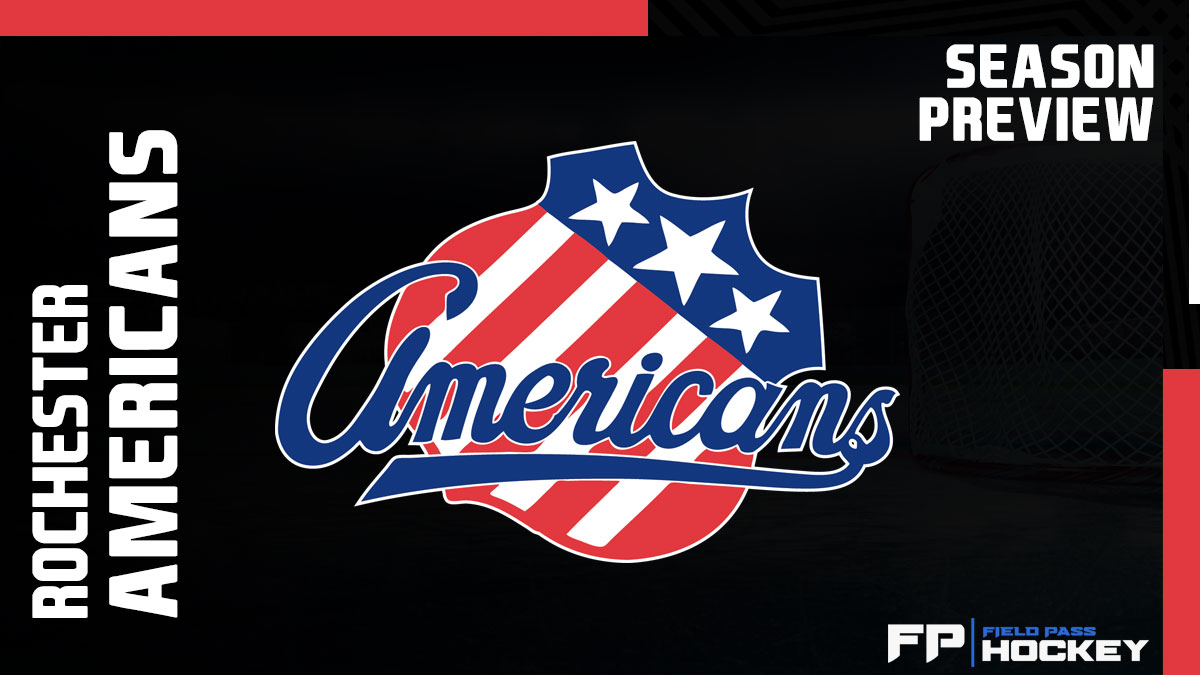 Change is the nature of the beast when you find yourself a fan of a minor league sports team.

ROCHESTER, N.Y. – Change is the nature of the beast when you find yourself a fan of a minor league sports team. Players develop and move on, while others are given last chance opportunities to prove that they deserve to play in the American Hockey League and/or the National Hockey League, respectfully. All it takes is a quick rundown of the Amerks roster to identify these storylines heading into the regular season. For Amerks fans eager for their return to the arena, the question lingers – did this team improve this offseason? I think it’s fair to say, “yes.”

Season Summary: It’s safe to assume that most American Hockey League teams are chock full of rookies year in and year out, and the Amerks were certainly no exception last season. Perhaps where this was most visible was the blue line, and ultimately, it showed. The Amerks allowed 4.00 goals per game, worst in the North Division by almost half a goal per game, and worst in the AHL. While some players found their stride offensively, others failed to give a relatively inexperienced core of goalies a chance to win most games. Playing among the fewest games in the North Division in 2021, the Amerks will look forward to playing a mostly full schedule that will allow the team time to develop and mesh together – something that was not possible in 2021.

Stats: F Brett Murray registered 9-11-20 in 27 games played in 2021, while F Remi Elie led the team in goals scored with 10. F Michael Mersch registered 8-11-19 in 28 games played. The Amerks scored 89 goals in the 2021 regular season, good for 3.06 goals per game and 4th in the North Division. However, the team gave up 116 goals or 4.00 goals per game, the worst in the entire AHL. Scoring on the power play was no issue for the Amerks, as they were the third most efficient team in the AHL on the power play, converting on 25 percent of their chances. On the other hand, the Amerks were among the league’s most inefficient penalty kills, only shutting down opposing teams 75.2 percent of the time, worst in the North Division.

Key Acquisitions: D Jimmy Schuldt stuck around for a while on the Buffalo Sabres preseason roster, but after being sent down to Rochester this week, he is sure to be an impactful player on the blue line. If there is one thing this team did a year ago, it was giving up goals, and a lot of them. Adding a presence like Schuldt to the lineup, alongside players like D Oskari Laaksonen, will be a sure-fire way to stop the bleeding on defense this season.

Similarly, the addition of D Ethan Prow will add a veteran presence to the blue line that the Amerks have been missing. On nights where young guys struggle to find their footing, having a blueliner with five seasons of AHL experience will be absolutely invaluable. Oh, and he scores – almost at will for a defenseman. In his last two seasons in the AHL, Prow has registered 27-55-82 in 116 games played.

An acquisition that many did not expect to have an impact on the Amerks this season was the addition of G Aaron Dell; however, after being assigned to the Amerks and clearing waivers last week, Dell will be a part of the goaltending story in Rochester this season. More on that later.

Defenseman Jimmy Schuldt and goaltender Aaron Dell cleared waivers and have been assigned to the @AmerksHockey.

Key Losses: Elie signed a one-year, two-way deal with the Tampa Bay Lightning this offseason and is primed to play meaningful minutes for the Syracuse Crunch. Elie has been a constant in the ROC for the last three seasons and scored a career-high 10 goals in an AHL season that was limited to 28 games.

A lil' chip and chase from Gates Jr. and Elie

While still in the organization, F Arttu Ruotsalainen will deservedly make the opening night roster for the Buffalo Sabres, barring any setbacks. While only playing in 13 games for the Amerks last season, it will be hard not to miss his point-per-game production.

A Full Slate: The Amerks will play a 76 game schedule beginning on the road against the new look Utica Comets on October 17. Blue Cross Arena will welcome Amerks fans back on October 22 as Elie, and the Syracuse Crunch make the trip to the ROC. The season will conclude in Cleveland as the Amerks will take on the Monsters on April 24. Almost seven months of AHL hockey? Sign me up.

Re-Introductions: The Amerks will finally be facing Canadian teams again for the first time since the COVID-19 pandemic halted play in March 2020. Amerks fans on the other side of the border will not have to wait long as the Amerks begin a four-game Canadian road trip on October 23 against the Toronto Marlies and make stops in both Belleville and Laval. After only playing the Utica Comets, Cleveland Monsters, and Syracuse Crunch last season, Amerks fans will be anxiously waiting for their first opportunity to see a somewhat unfamiliar face in Blue Cross Arena – they will get their first opportunity as Belleville comes to town on November 3.

Road Heavy April: If you’re an Amerks fan, you’re hopeful that there is meaningful hockey being played in the month of April. Unfortunately for you, most of those games will take place away from the ROC. A five-game road trip starts the month off, as the Amerks play seven out of ten games on the road in the most important month of the season. Luckily for the Amerks, they were above .500 on the road last season.

The Returning Forwards Need to Produce: While the Amerks were busy in the offseason adding meaningful pieces to their blue line, it is clear that the team has faith in its returning forwards to light the lamp in the ROC this season. Murray led the team in scoring last season, and he is poised to do it again this season. Mersch will bring a veteran scoring presence to the front-end of this team and will look to recreate some of the magic from his more productive seasons. Mersch has four 20 goal seasons and four 40 point campaigns.

The player that the Buffalo Sabres organization, and in turn, the Amerks, need to step up this season is F Jack Quinn. In Quinn’s defense, he has only played in 15 AHL games. The talent is there – the talent is elite. When Quinn finds his stride, he has every opportunity to lead this team in scoring and has every opportunity to be called up to Buffalo. Quite frankly, he may be one of the best forwards in the AHL this season.

The Goaltending: It’s no secret that the Buffalo Sabres view G Ukko-Pekka Luukkonen as their goaltender of the future, however bringing in veterans such as G Craig Anderson and Dell looked to stifle UPL’s opportunity to compete for meaningful minutes in the NHL until the 2022-2023 season. Enter G Dustin Tokarski. Tokarski seems poised to make the NHL roster after Dell was sent down to Rochester. While this does not necessarily change things from a personnel standpoint – UPL and a veteran goalie splitting time in the ROC – I believe it does provide some insight into the Sabres train of thought moving forward. As Elliotte Friedman said this week on 32 Thoughts, I believe the Sabres look to Dell to hold down the net in the ROC while giving AHL veterans like Tokarski and young guns such as UPL a chance in Buffalo.

All of this to say, I expect to see a revolving door of goaltenders in the ROC this season – if anyone has over 40% of the starts in net, I will be surprised. However, there is a desperate desire for consistency in net after last season’s poor showing. Of course, G Michael Houser will compete for playing time, but UPL, Dell, and Tokarski will spend most of the season in net.

The Defense & Penalty Kill: Let’s call a spade a spade – the defense was painful last season. In games where the Amerks put up four goals, the opposition would regularly put up five. For the Amerks to have a fighting chance in the North Division this season, they have to play a more defensively sound style of hockey. Similarly, if teams score at a rate of 25% on the power play like they did last season, it could be a long year for Amerks fans and the goaltenders listed above.

Jimmy Schuldt and Ethan Prow will certainly contribute to the improvements needed on the blue line; however, returning blueliners such as Oskari Laaksonen and D Brandon Davidson will also need to produce.

Prediction Sure to Go Right: The Amerks will let up less than 4.00 goals per game. At least, Amerks fans hope this is a prediction sure to go right. Although there may not be clarity in net in terms of who gets the majority of the workload, it is certainly a stronger tandem this season than last. Couple that with the additions of veterans on the blue line, and this team will let up less than the 4.00 goals per game it did last season.

Prediction Sure to Go Wrong: D Owen Power will play for the Amerks this season. Okay, now hear me out. The NCAA Frozen Four ends on April 7, and not many would disagree with the assertion that the University of Michigan will be playing hockey until that point. At the end of his season at UM, Power could sign his entry-level contract with the Buffalo Sabres and finish his season with the team.

I do not think he would start in the ROC – if not for the fact that UM has a dynastic team poised to finish what they started, Power would be a Sabre yesterday. That being said, if the Amerks are able to qualify for the playoffs, their season could extend into May. With all due respect to the Buffalo faithful – the Sabres are not making the playoffs. If the organization wants Power to get some minutes in games that matter as he transitions into the pros, look no further than the ROC. For this reason alone, Amerks fans have to be pulling for this team to make the playoffs, of which I believe they are capable.

Buffalo Sabres General Manager Kevyn Adams and Rochester Americans General Manager Jason Karmanos were busy this offseason, ensuring that the organization was defensively sound. For that reason alone, Amerks fans can breathe a sigh of relief. Some questions still need to be answered about the offensive prowess of this team; however, with the success this team had on the power play last season, coupled with the return of players like Murray and Mersch, there should be plenty of lamp lighting in the ROC. If you’re an Amerks fan, you’re eager for this season to get started – to erase the woes of last season. The first chance to impress is fast-approaching – October 17 will be here before we know it.

How will the Americans fare this season? Will they find themselves on the outside looking in at the playoff bracket, become a victim of the league’s new playoff format, go deep in the playoffs, or win the Calder Cup? Let us know your thoughts.