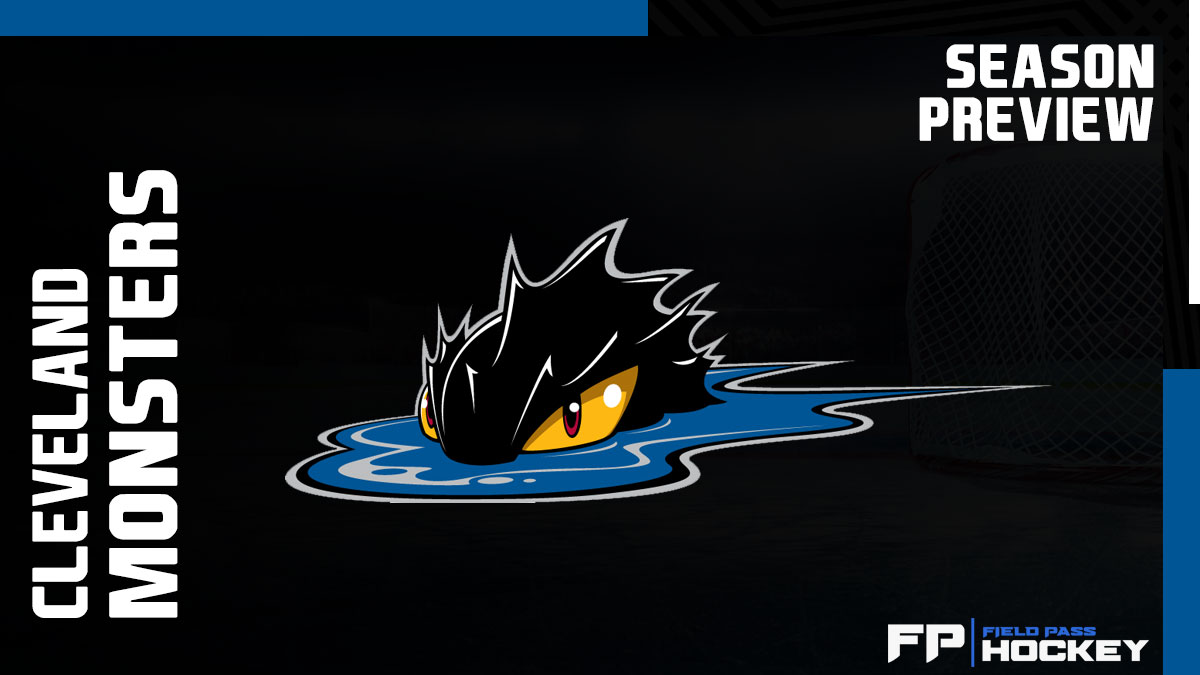 CLEVELAND – It’s beginning to feel a lot like 2015-2016 in Cleveland these days. Benefitted by an NHL club destined to restock depth within their prospect pool, the Cleveland Monsters certainly appear to be a much more competitive team this season than the 2021-2022 campaign. In a league where 23 teams make the Calder Cup Playoffs, it is fair to say that anything less than qualifying for the postseason will be a disappointment for the club. Perhaps the most notable upgrade for this team is in net, assuming a healthy Daniil Tarasov plays a majority of his season in Cleveland while backed up by Jet Greaves, but suffice it to say that every area of the ice improved this offseason for the Monsters.

Record & Playoff Appearance: 28-35-8-5 (7th in the North Division). Cleveland did not make a playoff appearance.

Season Summary: The Monsters were able to start the season on the right foot, but it wasn’t long before the injury bug swept over the team. Liam Foudy, perhaps the Columbus Blue Jackets’ top prospect that was a lineup regular for the Monsters last season, suffered a season-ending injury after suiting up in 29 games. In those games, Foudy registered a 7-12-19 stat line. Josh Dunne played in an identical 29 games. Tarasov’s season ended in January, as well. Adam Helewka played in 37 games. Unfortunately for the Monsters, the season was over by February, but that’s not to say there weren’t bright spots for the club. Trey Fix-Wolansky returned after missing most of last season with a lower-body injury. His play earned him a couple of opportunities to head down I-71 to skate with the big club. Jake Christiansen looked like a bonified offensive-defenseman, racking up 45 points in 62 games, leading the team by eight points. Finally, Greaves showed that he deserves a chance to play meaningful minutes in Cleveland, and he looks poised again to do it this year.

Christiansen led the team in scoring, registering 13 goals and 32 assists for 45 points in 62 games played. Only Brendan Gaunce came close to Christiansen’s points-per-game pace out of the rest of the lineup regulars.

The Monsters had 207 goals last season, good for 23rd in the American Hockey League, and allowed 262, only three spots from the cellar at 28th in the AHL.

Cleveland capitalized on 17.8 percent of their power-play opportunities last season, a number they’ll hope to see climb this season. The team finished last in the North Division in power-play efficiency and 25th in the league.

The Monsters were able to stop 79.8 percent of their opponents’ opportunities with an extra man last season, good for 5th in the North Division and 21st in the league, respectively.

The Monsters are relying quite a bit on roster trickledown from the Blue Jackets. This offseason, they only signed one skater and one goaltender who were not already members of the organization last season.

Kirill Marchenko will join the Monsters: a move that many assumed would not happen. Let’s face it; this makes a lot of sense. Marchenko is beginning his first professional season in North America, so there are some adjustments he’ll still need to make in his game to maximize his potential. Marchenko will be a tremendous addition to this Monsters club and will be poised to be a top-6 forward to start the season. The quality of his 200-foot game is undeniable, and he’s the type of forward to position himself for a greasy goal. It’s possible that his impact on the club may be short-lived, but it would be a sight to see if the Blue Jackets brass decided to keep him in the AHL for a full season to develop.

Was Kirill Marchenko thinking shot right away when he got the puck before his goal? He smiled wide when I asked. "Yeah, I like the shot. I like to score. … I thought, 'OK, I have open ice. Why not shoot it?' " #CBJ pic.twitter.com/zP6aVPCrJJ

David Jiricek will also be a sight to see in Cleveland. It was not until the final day of the NHL preseason that the Columbus Blue Jackets assigned Jiricek to Cleveland. Many believed he would be loaned back to HC Plzeň, his Czechia team, but ultimately, Jiricek will remain in North America. This is excellent for his development and a big win to keep him in the system. At 6’3″, Jiricek will be hard to miss on the blue line, and his ability to play a defense-first game will allow his partner to jump up in the play with ease.

Marcus Bjork comes to Cleveland after spending the last three seasons with Brynäs IF of the Swedish Hockey League, Sweden’s premier hockey league. Bjork has found success as a two-way defenseman and certainly strengthens the Monsters’ blue line. He’s another player who will take some time to adjust to the North American ice, but he will make an impact once he does.

Pavel Cajan joins the Monsters this season as the presumptive third goaltender in the organization. As we know all too well, goaltending depth is at a premium, and the former Kitchener Ranger is poised to continue making an impression on the front office. Cajan was signed to an AHL contract after attending the Columbus Blue Jackets Development Camp this summer and has looked confident in net, especially for a 19-year-old. Most notably, Cajan was a formidable backup to Greaves at the 2022 Traverse City Prospect Tournament. Cajan finished the tournament with a strong performance in the second half of the Blue Jackets’ matchup against the Toronto Maple Leafs, securing a win after blanking the Leafs in the second half of the game.

Thomas Schemitsch is one of a few 2021-2022 Monsters that have chosen to take their talents overseas for the 2022-2023 campaign. Schemitsch will play for the Malmo Redhawks of the Swiss Hockey League. Schemitsch was a reliable blueliner for the Monsters for the last two seasons, playing in 71 games last season. Fortunately for the Monsters, a player of the caliber of Bjork may make this loss less painful.

Tyler Sikura remained unsigned until October 3, when the Wilkes-Barre/Scranton Penguins signed the veteran forward to a one-year AHL deal. Sikura put up 15 goals and had 21 assists last season in 75 games played with the Monsters. This consistency is something the Monsters will surely miss this season. Perhaps, what they’ll miss more is his veteran presence on a team full of young prospects.

Tyler Sikura nets his 5th GWG of the season in OT for @monstershockey. pic.twitter.com/443oDsHMGw

Cole Cassels is another veteran that the Monsters will be without this season, as he returns overseas to play for Sodertalje SK of HockeyAllsvenskan.

Perhaps one of the more staggering facts about this year’s schedule for the Monsters is brought to you by an expanded AHL Playoff Format: the Monsters only play eight games against non-playoff clubs from last season. You read that correctly – eight games in a 72-game season. Now, of course, there is a lot of turnover in the AHL, and teams such as the Rochester Americans and Chicago Wolves have lost a lot of what made up their teams last season.

The first part of the schedule is kind to the Monsters in terms of 3-in-3 matchups. Come February, Cleveland will need to be ready for 3 3-in-3 matchups in 3 months. Perhaps the most challenging 3-in-3 comes at the conclusion of the season, where every point counts: a Friday matchup at Utica, and then a home-and-home against Rochester on Saturday and Sunday.

The Columbus prospects are here and ready to make a difference. Jiricek and Marchenko are obvious candidates for breakout AHL seasons, but the question remains: how long do they remain in Cleveland? Could the Blue Jackets player development team keep them in Cleveland longer than seems necessary to the average fan? It’s highly possible. Other key prospects to keep an eye on throughout the season are Christiansen and Tarasov, who largely remain on the outside looking in of the NHL roster. However, Tarasov is starting the season up with the Blue Jackets while Joonas Korpisalo continues recovery from an injury sustained in the 2021-22 season. Once Korpisalo is activated, Tarasov will likely be sent to Cleveland.

Syracuse taking advantage of a rough couple of minutes for the Monsters. Daniil Tarasov with a couple key saves here.

This is the most comfortable he's looked all season.

Trent Vogelhuber spent most of last season acting as head coach, while Mike Eaves coached the team from a distance to focus on his health. This season, Vogelhuber will officially hold the reigns as the youngest AHL Head Coach. He’s a player’s coach, and his players always know where they stand with him – it’s going to be a lot of fun watching Vogelhuber lead this team this season.

What’s the deal with Emil Bemstrom? After being sent down to the AHL, it will be fascinating to see how he confronts this opportunity. To some, being sent down may feel like a slap in the face, a commentary that they’re not ready for the NHL. Bemstrom has had moments in the NHL where he has looked like a top-6 forward, and he has had moments where you wonder where he’d be in Cleveland’s lineup. He has gotten a taste of the AHL before. The hope is that he will take the opportunity for meaningful ice time and use it to his advantage to solidify himself as a legitimate NHL roster player.

Undoubtedly, the Monsters will contend for a spot in the Calder Cup Playoffs. The team has acquired too much talent in all facets of the game not to play meaningful hockey down the stretch. Perhaps the question isn’t if they can make the playoffs, but how far can they go?

The Monsters will have at least one player that eclipses the 70-point mark. Let’s face it, the Monsters’ system isn’t designed with high-skill, big-point kind of hockey. That being said, there are some gamebreakers on this roster. Marchenko, Bemstrom, and Fix-Wolansky are prime candidates to make this prediction sure to go wrong, go right.