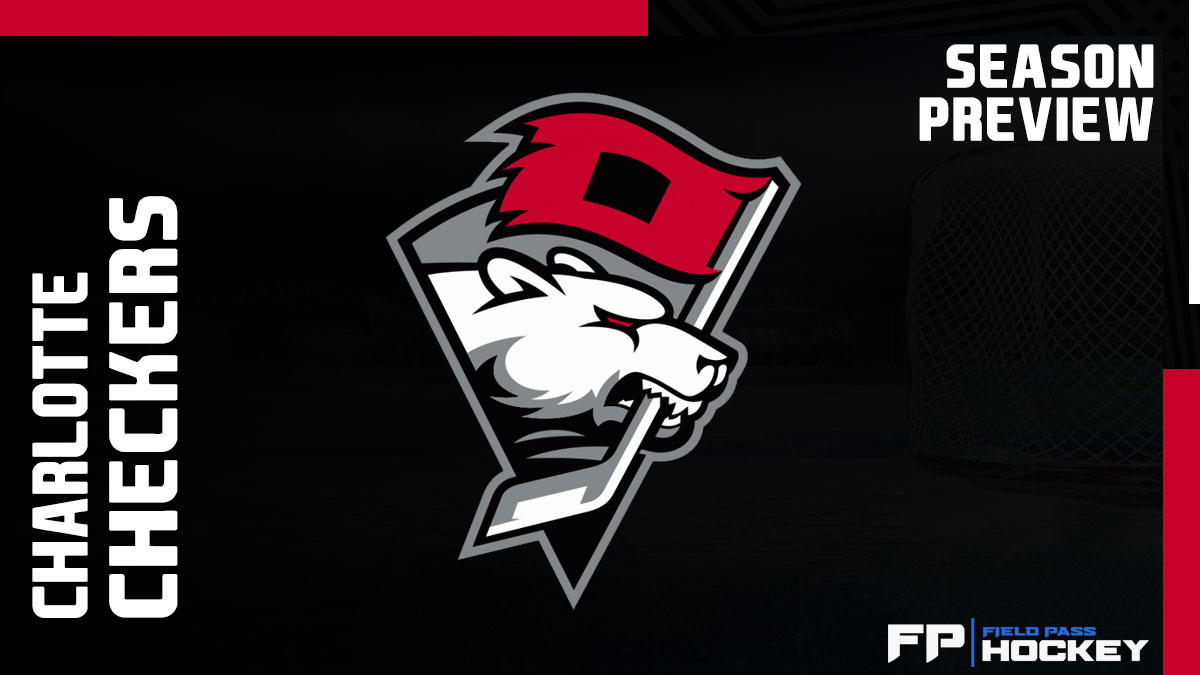 Change and resetting are the stories leading into the 2022-23 Charlotte Checkers season. Sure, a decent amount of change is a given in any minor professional hockey league. The Charlotte Checkers have seen their fair share as they finish preparations for the upcoming campaign. Multiple roster players headed west thanks to the formation of the Coachella Vallery Firebirds. A new look behind the bench and in net. Charlotte is facing quite the adjustment period as its season gets underway on Friday, October 14.

Will these moves be enough to return Charlotte to Calder Cup glory? Keep reading to decide.

Season Summary: After opting out of the 2020-21 season due to the ongoing pandemic, the Charlotte Checkers rejoined American Hockey League action after a 583-day hiatus. The season was rough, to say the least. At the end of February, the Checkers found themselves fifth in the Atlantic (out of eight teams) and ninth in the Eastern Conference. While that would have been good enough to get into the playoffs, the team was not happy. Being able to pull the best out of the prospects in the Florida Panthers and Seattle Kraken organizations, fifth was nowhere near good enough. Somehow, the team gelled and went on a heater for the remainder of the season. The Checkers set a new franchise record, going 11-0-2 beginning on February 12. That streak ended with the team being awarded the Emile Francis Trophy as the Atlantic Division regular-season champions. Zac Dalpe set the pace all season long with a team-best 30 goals. He also set a personal milestone as he crossed the 600 pro game mark, playing in 605 regular-season games between the AHL and NHL. Ultimately, they were eliminated by Atlantic Division foes, the Springfield Thunderbirds, in the Atlantic Division Finals.

First up is goaltender Alex Lyon. As part of a mass exodus out of the Carolina Hurricanes organization following the Chicago Wolves’ 2022 Calder Cup championship, Lyon was one of many looking for a new home. Plus, a chance to get a two-way NHL deal was an enticing option open to many of those players. Lyon finished the regular season with a 2.16 goals-against average (second in the AHL) and a 0.912 save percentage. Along with Pyotr Kochetkov, the two backstopped the affiliate of the Hurricanes to their second-straight Calder Cup. Lyon took on the bulk of the work, turning in a 2.03 goals-against average and 0.923 save percentage over 12 postseason games. Lyon will provide a terrific bubble option to help the Florida Panthers or the Checkers. He plays a sound positional game and moves quickly. Scrambling isn’t part of his repertoire because he’s excellent at analyzing the game and reading where the puck will go.

Speaking of bubble options, Cam Johnson will be just that for the AHL/ECHL. Johnson is fresh off a Kelly Cup championship season with the Checkers’ new ECHL affiliate, the Florida Everblades. Posting a 36-save performance in the decisive Game 5 victory over Toledo on June 11, he received the June M Kelly Award as the ECHL Playoff MVP. Overall, he turned in a 15-2-1 record, a 1.90 goals-against average, and .931 save percentage in the postseason.

In the 2021-22 regular season, Johnson went 10-3-2 with a 2.07 GAA and .913 SV% with the Everblades. He posted a 6-9-3 record with a 3.27 GAA and .822 SV% for the AHL’s Cleveland Monsters. After spending the last three seasons primarily in the ECHL, Johnson is looking to jump into the AHL on a more regular basis. While he doesn’t have the read on shooters as Lyon does, his size helps make up for it. He’s a nice depth option and can be reliable when given the ice time and starts to settle in. Worst-case scenario, I’m sure the Everblades won’t mind having him back for extended periods.

Turning away from the veteran presence for a moment, the Checkers will get a look at an exciting defensive prospect in Nathan Staios. He was signed to a three-year, entry-level contract by the Panthers in mid-July. Staios is coming off a strong year in the OHL with the Hamilton Bulldogs, where he was named the OHL defenseman of the year. In total, Staios had 15 goals and 51 assists, good for 66 points in 59 games. In the playoffs, Staios put up 9 points (3G, 6A) in 13 games. The young defenseman looks to be a potential offensive weapon for the Checkers. While he’s on the smaller side for pro players (5’8″, 170 lbs), he uses that to his advantage in dodging checks and getting out to open ice. Staios, like Lyon, anticipates the play well, making him a solid two-way option. Oh yeah, plus he has a pro pedigree under his belt as well. His father, Steve Staios, enjoyed a long career in the NHL, with 1,001 games spanning from 1995-2012.

The final point on this list of key acquisitions is a twofer: Jared Staal and Bobby Sanguinetti.

No, they aren’t taking a victory lap as players. Instead, they are returning to Charlotte on the other side of the bench: as assistant coaches. This move also reunites the duo with Head Coach Geordie Kinnear, who was an assistant coach during both skaters’ stints in Charlotte. Staal joins the Checkers after spending the last three seasons coaching for the ECHL’s Orlando Solar Bears. The first two years were as an assistant coach and the last as an associate coach. As a player, Staal logged 375 pro games. 215 were in a Checkers sweater during five seasons in Charlotte from 2010 to 2015.

Sanguinetti is taking his first season behind the bench finishing his playing career in 2019-20. Spending parts of ten seasons in the AHL, the defenseman played 406 games with 58 goals and 171 assists for 229 points. He is fourth in Checkers history for points by a blue liner with 90 (70G, 70A) and also has a Calder Cup, earned three AHL All-Star Game appearances, and a spot on the AHL Second All-Star Team.

Adding these two behind the bench is crucial for a team in transition. Any time you can add in strong, experienced players (behind or on the bench) to help develop young prospects and those learning the pro game, you do it. That’s Charlotte’s play here; hoping the duo can help Kinnear take the Checkers to another postseason run.

Not surprisingly, the biggest losses for the Checkers come off the shift back to a single affiliation. Most notable are True and Joey Daccord. Both have moved to the Western Conference since the Seattle Kraken have their prospects playing for the Coachella Valley Firebirds. True led the Checkers last year in points with 42. Daccord posted a 19-11-2 record in 2021-22, with a 2.28 goals-against average and a .925 save percentage. Those were good for fifth and second in the AHL, respectively.

Charlotte will also be without Cole Schwindt for the 2022-23 AHL season. Schwindt was traded to the Calgary Flames as part of a blockbuster trade with the Panthers. He was a pure force on offense, leading Charlotte rookies with 40 points. 36 of those came while at five-on-five. In total, Schwindt had 19 goals and 21 assists in 72 games, earning him Checkers Rookie of the Year honors.

As part of the league’s schedule unification, Charlotte will return to a 72-game regular season. The Checkers 2022-23 campaign begins in the Queen City on October 14- the first time in their 11 years in the AHL that the season starts at home. In fact, the first four games will be in the friendly confines of Bojangles Coliseum. First is a back-to-back stint against Hartford. The following weekend is another back-to-back, this time against Hershey.

In a slight twist to a typical Friday night matchup, the Checkers will host the Utica Comets for a 4:00 p.m. drop on Black Friday. Like most of Charlotte’s other home matches, this ends with a back-to-back the next day.

Charlotte’s opponent roster remains largely unchanged, except for the Texas Stars. Taking their spot and making their return to the Coliseum are the Toronto Marlies. They will visit Charlotte for a… you guessed it… a back-to-back series on February 10 and 11. Charlotte will visit Toronto on March 17 at 1:30 and March 18 at 4:00. That is the only new team added to Charlotte’s slate, taking the place of the Texas Stars from last season’s schedule. One of the games in Toronto (March 17) will be played at Scotiabank Arena, home of the NHL’s Maple Leafs.

In total, the Checkers will play divisional rivals 52 times. The remaining 20 matchups will come from North Division opponents.

The transition from a dual affiliation. In total, the Checkers lost an assistant coach, five forwards, four defensemen, and two goaltenders from the Kraken sending their prospects to the newly formed Coachella Valley Firebirds. They’ve signed enough players to fill those spots, but how does the team chemistry shift?

Will they rebound from the Atlantic Division Finals sweep by the Springfield Thunderbirds? After being awarded a first-round bye thanks to capturing the Atlantic Division crown (second in the Eastern Conference), the Checkers went on to a decisive 3-to-1 series victory over the Bridgeport Islanders. Thunderbirds and Checkers both finished the regular season with a 0.625 point percentage.

What is going to happen with Grigori Denisenko? Lots of promise, but he’s only played in 53 pro games in North America in the last two seasons. A broken kneecap ended his 2021-22 season far too early. He was piecing together a solid campaign, and oh, by the way, despite the injury, he still scored the game-winner.

HAVE YOURSELF A NIGHT, DENI 🚨 pic.twitter.com/hiX4WJMCij

Will Denisenko get right back to his old form? How do the injury, surgery, and recovery impact his game? Does a severe injury from a blocked shot change his playing style? These questions won’t be answered until we get going in the 2022-23 AHL season.

Thanks to the salary cap crunch in the NHL, competition in the AHL will be tighter than ever. That miraculous rise to the top of the Atlantic the Checkers saw last season? Yea, that likely won’t happen this year. If the Checkers want to repeat their division title, they need to find chemistry and rack up victories early. So, this writer’s not-so-hot take is: the Checkers, with a solid core and a list of strong veterans joining the squad, will do just that, staying in the top half of the Atlantic all season.

The team scoring title will be held by someone on an NHL entry-level contract. With the salary cap being what it is, competition is tight. This will force many NHL teams to play the numbers game in call-up situations. This will promote healthy competition for these younger players in a race to be the first considered for a call-up at their position.