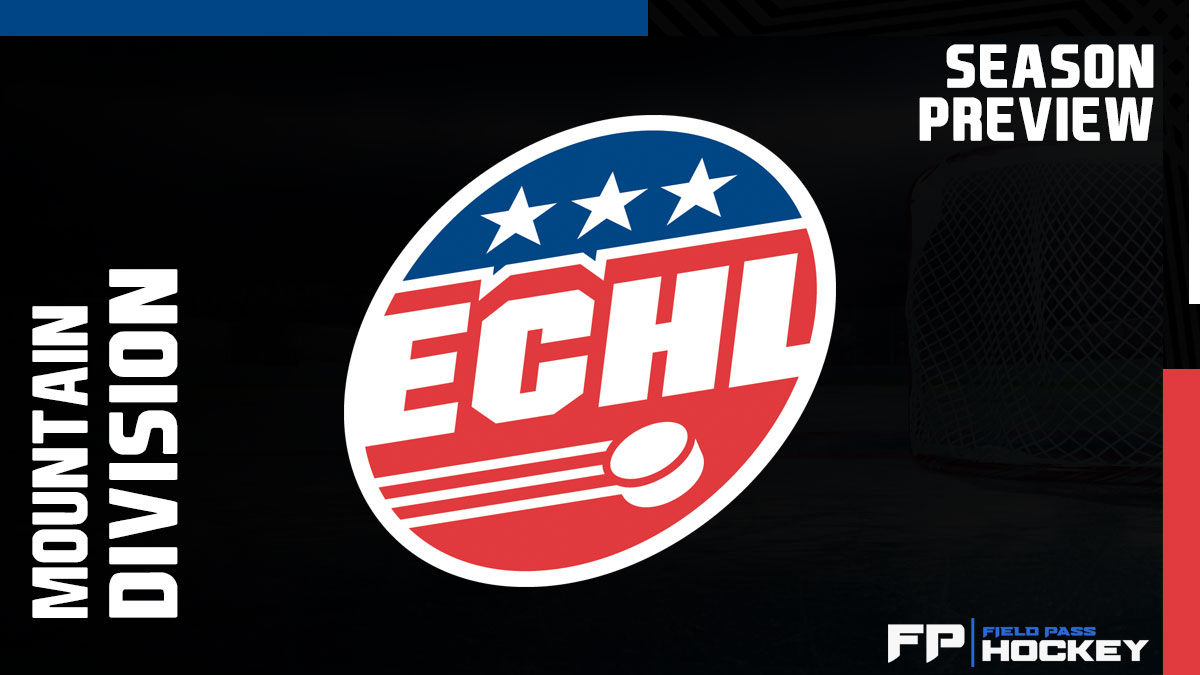 When you ladle in the natural rivalry between Utah & Idaho, along with the old Central Hockey League rivalries – of which there are quite a few – each night, you have an endless supply of storylines

WICHITA, Kan. – Year after year, the ECHL’s Mountain Division has been one of the toughest divisions in all of hockey. When you ladle in the natural rivalry between Utah & Idaho, along with the old Central Hockey League rivalries – of which there are quite a few – each night, you have an endless supply of storylines.

While the Mountain Division may have had the worst points percentage on average last season, the glass-half-full optimist says it reflects the adjustments coaches make game-to-game. With the other three divisions wrapped up with some time left last season, the Mountain came down to a pivotal series between the Utah Grizzlies and Rapid City Rush in the season’s final days, one in which the Grizzlies outmatched the Rush.

The race for the last playoff spot came down to the final weekend, with the Allen Americans returning to the tournament in Steve Martinson‘s final year as Americans’ head coach, outlasting Idaho and Kansas City. Then there are the Wichita Thunder, who are looking to, once again, climb out of the Mountain’s cellar and return to the playoff conversation.

Indeed, just like every game night out west, the Mountain Division has an abundance of intriguing storylines heading into the season.

The Mountain Division finals pitted the top two teams in the division against each other; Utah and Rapid City. In that series, the Grizzlies’ offense was the story, as they advanced to the Western Conference Final in six games over the Rush.

The Grizzlies’ season would come to an end in the Western Conference Final, as the Toledo Walleye won the series in five games.

Utah: The reigning ECHL Defenseman of the Year, Charle-Edouard D’Astous, has taken his talents to Finland after a very successful postseason that saw him post absurd numbers. The Grizz will also be on the market for a new captain, after Trey Bradley signed with the Reading Royals in the offseason.

Goaltender Lukas Parik was signed to a two-way deal by the Colorado Eagles in the offseason and will look to improve on his solid rookie campaign from a season ago. Defenseman Victor Bartley returns to Utah to play for the first time since the 2009-10 season. The former NHL defenseman is coming off a three-year stint in the KHL and will be looked upon to fill in some of the offense left behind by the absence of D’Astous.

Rapid City: The most significant loss for the Rush in the offseason came in the form of Stephen Baylis, who stayed in the division, signing with the Allen Americans. Baylis had a career year in 2021-22, posting highs in goals, assists, and points.

Kelly Cup champion forward Alex Aleardi will be a good replacement for Baylis, bringing his point-per-game ECHL career to the Black Hills. Last season, he posted 59 points (31G, 28A) in 61 regular-season games, adding an additional 12 points in 20 playoff games with the Florida Everblades.

Allen: The biggest loss in the offseason for Allen came behind the bench, as Martinson was not re-signed after his contract expired. First-year head coach Chad Costello has put together a solid roster, bringing back many familiar faces, but Americans fans should expect some growing pains as Costello works into his new role.

Costello added some tenacity and puck-moving to the blueline in the offseason with the signing of Colton Saucerman, who returns to the ECHL after spending the last two seasons in Austria and Slovakia. In his last full ECHL season, with the Idaho Steelheads in 2019-20, he posted 22 points and 86 penalty minutes.

Tulsa: Perhaps the biggest loss for Tulsa is one that hasn’t happened yet. Team captain Adam Pleskach was placed on team suspension early in training camp, and rumors have swirled on whether the legendary Oilers forward has hung up the skates. If he indeed has, his offense will be hard to replace for a team that has struggled to score during Rob Murray‘s time behind the bench in Green Country.

Sometimes, retaining players is just as good as scoring a big offseason signing. That case applies to the return of Daniel Mannella, who was the Oilers’ workhorse last season. The rookie netminder posted a record of 29-16-4, with a 2.60 goals against average, a .907 save percentage with a pair of shutouts last season. If he can duplicate that again this season, the Oilers should be in the playoff conversation once again.

Idaho: Defenseman Michael Prapavessis signed to play in Slovakia this season after having a career year patrolling the Idaho blueline last season.

To help blunt that loss, head coach Everett Sheen went out and signed three-time ECHL Defenseman of the Year and Kelly Cup champion Matt Register. The veteran returns to the ECHL after winning the EIHL championship with the Cardiff Devils last season.

Kansas City: The first two years of the Tad O’Had regime in Kansas City have not gone as well as most thought, that is unless you’re Marcus Crawford, who posted back-to-back career years with the Mavs. Last season was the fifth-year defenseman’s high-water mark, posting 52 points (11G, 41A), 143 penalty minutes and earning a trip to Jacksonville for the ECHL All-Star Classic.

O’Had tapped into the Florida Everblades pipeline again this offseason, bringing in forward Jake Jaremko and defenseman Jordan Sambrook from the Kelly Cup champion squad. Jaremko posted 50 points last season, while Sambrook was a key cog to the Everblades blueline.

Wichita: After a three-season stint that saw a pair of call-ups to the AHL’s Springfield Thunderbirds, forward Peter Crinella signed with the EIHL’s Guilford Flames during the offseason. His offense and play-making abilities will be missed on a team that is very young.

The addition of Dylan Macpherson from Wheeling will add tenacity and steadiness to a Thunder blueline that sorely needs it after allowing more than 250 goals one season ago.

The Mountain Division teams will face one another anywhere from 6-15 times during the regular season.

Utah’s out-of-division travels take them to Jacksonville, Greenville, and Savannah this season, while they host Trois-Rivieres for a three-game set over American Thanksgiving weekend.

Rapid City plays just six games outside the division this season, hosting Toledo as part of a five-game homestand spanning February 10-18. They’ll head to Fort Wayne to take on the Komets in a three-in-three March 24-26.

Allen travels east to take on Cincinnati and Fort Wayne (in a 2021 West Final rematch) in mid-November, and heads to Reading in mid-December.

Tulsa will host Jacksonville at the BOK this season, travels to Maine for the first time ever, and will play Cincinnati and Kalamazoo as part of a six-game Central Division stretch.

Idaho opens the season in the corn of Iowa, taking on the Heartlanders tomorrow night. They’ll also head east to Worcester to play the Railers, and host Orlando in mid-March.

Kansas City will play just three games against the Eastern Conference. In an apropos matchup, the Mavs head to southwest Florida to take on the defending Kelly Cup champion Everblades in late February.

Wichita will host Iowa for the first time ever on November 12, in it’s only home game against the Central Division. The Thunder will head to Iowa and Toledo during the second half of the season.

As we discussed, nightly storylines abound here in the Mountain Division. Here are just a few as we approach the start of the season:

Win or Bust in Independence: This is a big year for O’Had and Weselowski in Kansas City, and it shows based on the signings they had in the offseason and the added pressure from the team president, who vowed never to miss the playoffs again. There’s no doubt the team is more well-rounded heading into the season, buoyed by some significant help from their new AHL counterparts, the Coachella Valley Firebirds.

Can Rapid City Back it Up? The Rush had their best season since their first year in the ECHL in 2014-15, which finished with a second-round playoff run under former head coach Joe Ferras. The Rush brought back a significant portion of their squad from a season ago, but lost Parik to Utah and Baylis to Allen. Fourth-round pick, netminder Daniil Chechelev,  struggled as a rookie last season, but maybe a new ECHL philosophy to play in front of will help. The addition of Alex Aleardi, will be a major help to the Rush running it back this season.

Does Wichita Climb Out of the Cellar? Thunder head coach Bruce Ramsay blew his team up after a 9-1 loss in Idaho last March and pulled off the rare feat of having all but two of his future considerations make the roster (Esteves traded to Wheeling, Campbell would not report). Sprinkle in the return of some key pieces of last season’s team, plus an influx of talent from the San Jose Barracuda, and the Thunder have the pieces to be players in the division. The only thin spot with the club is in veteran leadership, with just one elder statesman on the opening night roster.