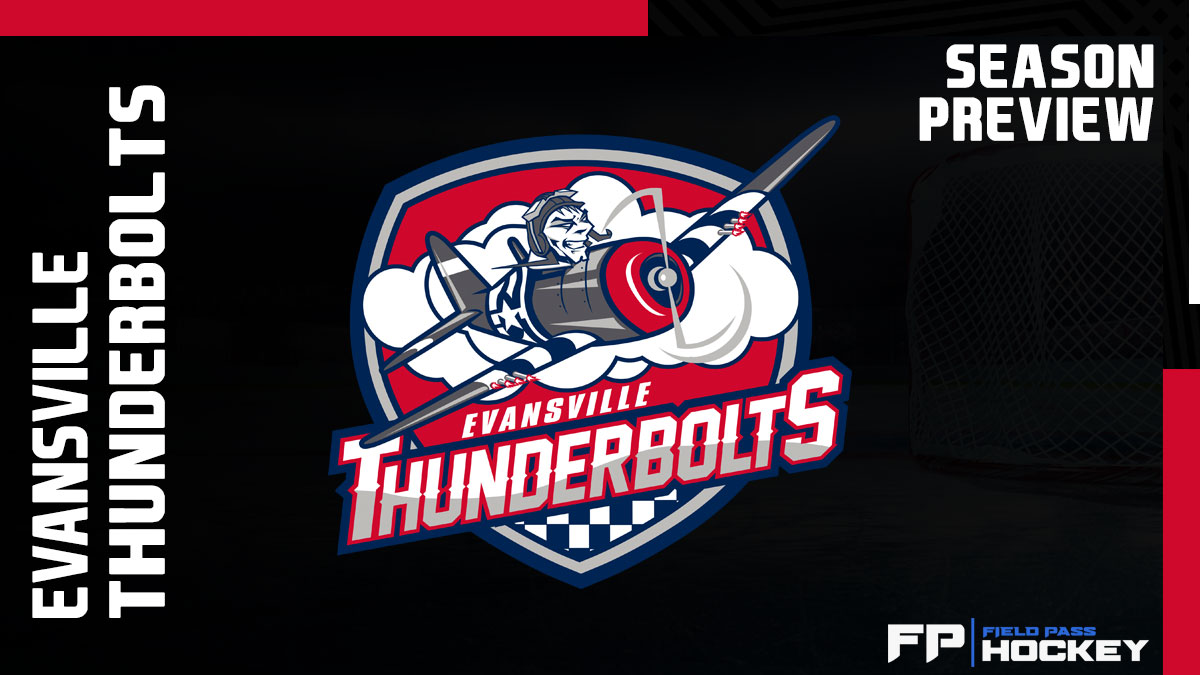 After falling short in the playoffs last season, this year’s Thunderbolts team is looking to take their game to the next level.

EVANSVILLE, Ind. – After falling short in the playoffs last season, this year’s Thunderbolts team is looking to take their game to the next level. Head coach Jeff Bes has this team on the cusp of something special, and the players are all buying into the plan. With a new logo and fresh new sweaters, you get a sense that this team has already turned over a new leaf. The expectations around this organization are not just to make the playoffs this year, they have a championship in mind.

Season Summary: The Thunderbolts got off to a great start last season, only losing once in the opening month of October. After that, things started to flatline a bit. They floated around .500 going into the new year. It wasn’t until March that we saw the team really begin to catch a second wind, winning four consecutive games,  and really started to solidify themselves as a playoff contender.

They headed into the playoffs as the number seven seed and faced the Huntsville Havoc in the first round. In game one of the series, they had the Havoc on their heels, with a 2-1 lead early in the third period, and then the wheels fell off. The Havoc scored four consecutive goals and ended up stealing the game away from the Thunderbolts by a score of 5-3. They had a chance to get back into the series at home two days later. Evansville again took an early lead against the Havoc before ultimately falling 3-2 in overtime, ending their season.

Key Acquisitions: Bringing back Mike Ferraro for another season is big for this team. Last season he appeared in all 56 games and posted 37 points (14 goals, 23 assists), including an opening weekend hat-trick. Another key piece of the puzzle that is returning is Cameron Cook. During his rookie season, he was second in team scoring as well as a huge factor in the playoffs scoring three goals in two games.

Key Losses: A major loss to this roster is Austin Plevy, who has been the biggest producer on offense for this squad since his rookie season in 2019-20 where he posted 65 points in only 45 games. Guys like Ferraro and Cook are going to have to take their games to the next level to replace a talent like Plevy.

Also, the brick wall in net last season, Brian Billett, is not going to be with the Bolts this season. He played in 41 of the 56 games last season and posted a .912 save percentage along with a record of 21-17-1. Zane Steeves and Henry Johnson have some big pads to fill this season replacing an SPHL great like Billett.

Evansville will open the season on the road in Knoxville against the Ice Bears before coming back home to face that same Knoxville squad in their home opener. In November, the Bolts will have their most extended road trip of the season when they stay away from the Ford Center for five games to close out the month. Towards the end of January into the first few weeks of February, the team gets to stay on home ice for six straight games hosting Huntsville, Macon, Fayetteville, and Quad City. The schedule has Evansville taking on Peoria and Vermilion County both nine times this season and the Quad City Storm eight times. The unofficial north division in the SPHL will surely make for some exciting games and create some interesting rivalries.

After a very up-and-down 2021-22 campaign, the question is, can the Thunderbolts find the consistency needed to battle it out for a top playoff seed this year?  This roster has a lot of talent and can cause some serious damage when things come together. We saw last season that they are nearly unstoppable when they can get their offense rolling. Another thing to keep an eye on when it does come playoff time is whether this team can finally make it out of the first round. This will be Evansville’s sixth season in the league. They have only made the playoffs twice and failed to make it out of the first round both times.

Evansville will make the playoffs. There is no reason this team should be on the decline this season with much of the core remaining. There is even a good chance they do finally advance past the first round. We have all heard the old saying that you have to lose first before you can learn to win in the playoffs, and this veteran leadership core has the experience to carry this team deep into the playoffs.

Mike Ferraro will have a 50-point season. To be honest, this is not really that unbelievable. During college with Saint Anselm College, he was nearly a point-per-game player each and every season. Keep an eye on Ferraro to take his offensive game to the next level with the loss of Plevy to the lineup.