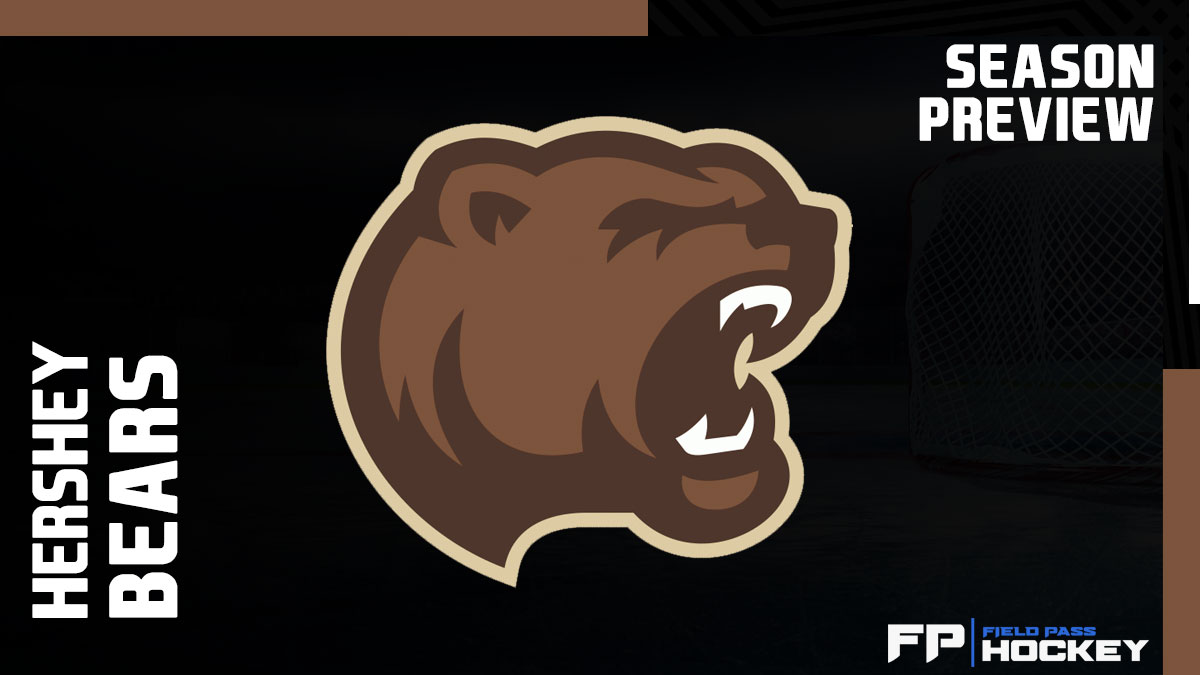 HERSHEY, Pa. – The Hershey Bears have reloaded their roster after a disappointing 2021-22 season marred by injuries and recalls to the Washington Capitals in hopes of building upon the core group and making a run at the franchise’s 12th Calder Cup championship. A significant group of players departed the organization, including captain Matt Moulson. He retired from hockey to become a scout with the Toronto Maple Leafs as well as a new coaching staff. Still, a few key summer pickups and an injection of youth with some of Washington’s top prospects breaking into professional hockey allow for plenty of excitement in the Sweetest Place on Earth.

LAST SEASON IN REVIEW: The Bears finished with a 34-32-6-4 record, good for 78 points and a fifth place finish in the Atlantic Division. Hershey was bounced in the first round of the Calder Cup Playoffs in three games to the Wilkes-Barre/Scranton Penguins courtesy of an overtime loss in the decisive third game. Hershey’s leading scorer was Mike Vecchione with 44 points (16 goals, 28 assists) in 59 games played. Hershey’s goals-for mark at 202 left them tied for 25th in the American Hockey League while their goals against at 209 were good for 11th overall amongst all 31 teams. The Bears struggled on the power play at 17.4 percent efficiency, good for 25th in the league, while the team’s penalty kill ranked 12th at 81.6 percent efficiency. The numbers reflect a team that struggled to score but had a solid defensive base that helped keep games close even after the team had lost a lot of its teeth offensively as the year went on. The loss of key personnel for lengthy periods harmed the team across the board and is an area that the organization looks to rectify this season.

OFFSEASON MOVES: Much has changed for the Bears over the summer. Gone is captain Moulson, who called it a career after having season-ending back surgery at the end of 2021. Also moving on is much of Hershey’s coaching staff as head coach Scott Allen and video coach Emily Engel-Natzke were both promoted to the Washington Capitals. Key players like Brian Pinho, Cody Franson, Tobias Geisser, Pheonix Copley, Eddie Wittchow, Drake Rymsha, and Marcus Vela all departed over the summer, with players like Pinho on the injured list for much of the year and lineup regulars like Franson, Geisser, and Copley creating significant holes in the roster going into the summer. The Chocolate and White unveiled former Bears Todd Nelson and Nick Bootland as the new head and assistant coaches, respectively, along with Patrick Wellar returning behind the bench. Adam Purner and Juha Lehtola were tabbed as the new video and goaltending coaches, respectively. Hershey’s biggest summer splash was the signing of forward Sam Anas to an AHL contract for the coming season fresh off of finishing tied at 12 in the league in points with 64 during the regular season and leading the Springfield Thunderbirds to their first appearance in the Calder Cup Finals last spring. Hershey brought back veteran defenseman Aaron Ness, who previously helped guide the Bears to the last round in 2016 and led AHL defenders in scoring during his most recent season in Hershey. The Capitals added forward Henrik Borgstrom and defender Lucas Carlsson over the summer, who should be ticketed to Hershey as significant additions for the Bears. Still, the real meat of additions comes in the form of top prospects joining the team, with Hendrix Lapierre, Vincent Iorio, Henry Rybinski, and Bear Hughes set to join the team as highly touted prospects joining the AHL ranks.

2022-23 SCHEDULE BREAKDOWN: The Bears saw their schedule reduced from 76 to 72 games to bring the league back into the same amount of games played across the board for the first time in a while, but a lot of familiar tropes in the schedule remain. Hershey opens the season with a pair of home games with the Utica Comets and the Lehigh Valley Phantoms, the latter of whom play the Bears a whopping 14 times as the most frequent foe on the schedule. The Bears play 18 of 32 games in the calendar year of 2022 in the friendly confines of Giant Center and will face every Eastern Conference team at least once at home and on the road, with the exception of the Atlantic Division, where the Bears will face each team multiple times.

The Bears are bringing in several specialty games this season, with Hockey Fights Cancer Night on November 20, a pair of Hometown Heroes games in November and January, the team’s first jersey retirement in 20 years when Chris Bourque’s number 17 is hung from the rafters on January 14, the annual Teddy Bear Toss on January 29, and the return of Bears Hall of Fame Night on March 18. Hershey will be road warriors in the latter half of the season in a similar fashion to last season, with only two home games after March 4 and three in April, but up until the final two weeks of the season will be spending most of the schedule playing foes outside of their division. Hershey’s longest homestand will be from December 28 through January 14 for seven games, while their longest road trip is a set of five games between March 29 through April 7. In all, the Bears will play 11 of 13 games on the road between March 11 and April 7 before three of four at Giant enter to end the season.

TOP STORYLINES FOR 2022-23: Hershey’s biggest storyline is without a doubt putting the pieces together for a successful season. The Bears saw their head coach change for the second time in as many summers, but the departure of Scott Allen and the external hire of Todd Nelson is a more considerable change than the team has gone through in some time. Naturally, Nelson’s ties to the organization as a player as well as his extensive ties to players and staff and his resume of success will go a long way towards easing any concerns that Bears fans should have about him, as he coached current vice president of hockey operations Bryan Helmer and current players Dylan McIlrath and Kale Kessy. Nelson brought home the Calder Cup with McIlrath as a member of the Grand Rapids Griffins in 2017 and will be bringing his own methods and strategies which players in the past have frequently praised. The challenge for Nelson will be to blend the incoming cast of Bears with the current core group from the past few seasons and get all of their strengths for a successful Bears group.

The situation in Washington with the Capitals will no doubt impact the Bears as it did a season ago. The Capitals did an impressive job of building their lineup through free agency despite the losses of personnel like Nick Backstrom and Tom Wilson to open the season, with Backstrom’s injury more long-term. However, it’s more than likely that the Capitals will have some personnel on their lineup that may have otherwise been ticketed to Hershey that will come back when Wilson returns. Hershey is far better equipped to handle player losses than they were a season ago, but the roster will be key to watch going into the season to see who could stay up with the big club. Joe Snively was in the midst of a career year in Hershey when he was recalled to Washington, and the losses snowballed into an ultimately disappointing season for the Bears who at one point led the Atlantic Division with a healthier lineup. With five forwards and five defensemen set to become unrestricted free agents in Washington next summer, there will be lots of roster upheaval and it’s up to the Bears to take advantage of their core group right now.

Naturally, the next biggest key will be consistency from the Bears offensively. Hershey has a lot of great pieces that have taken big strides in their careers, with players like Ness leading the league amongst defensemen in scoring in 2019, Mike Sgarbossa hitting 30 goals that same year, and young players like Brett Leason and Aliaksei Protas coming in with chances at the NHL with a strong 2022-23. The addition of Anas goes a long way in creating a potent offensive unit along with the likes of Garrett Pilon, Bobby Nardella, and Vecchione, but the way the Bears will finish this season will have a lot to do with scoring more goals in addition to strong netminding from the tandem of Zach Fucale and Hunter Shepard, who are both taking expanded roles at the AHL level. Hershey’s power play will need to level up with all of the combined players as a key element of the offensive flow for the team. All the pieces have the potential for something special in Hershey after plenty of years of wondering.

PREDICTION SURE TO GO RIGHT: The Bears will finish among the Atlantic Division’s top two teams in a similar fashion to the 2019-20 season in a return to form for the organization, proving the potential of the core group.

PREDICTION SURE TO GO WRONG: The Washington Capitals will stay completely healthy and not have to dip into their talent pool at the AHL level at all this season.