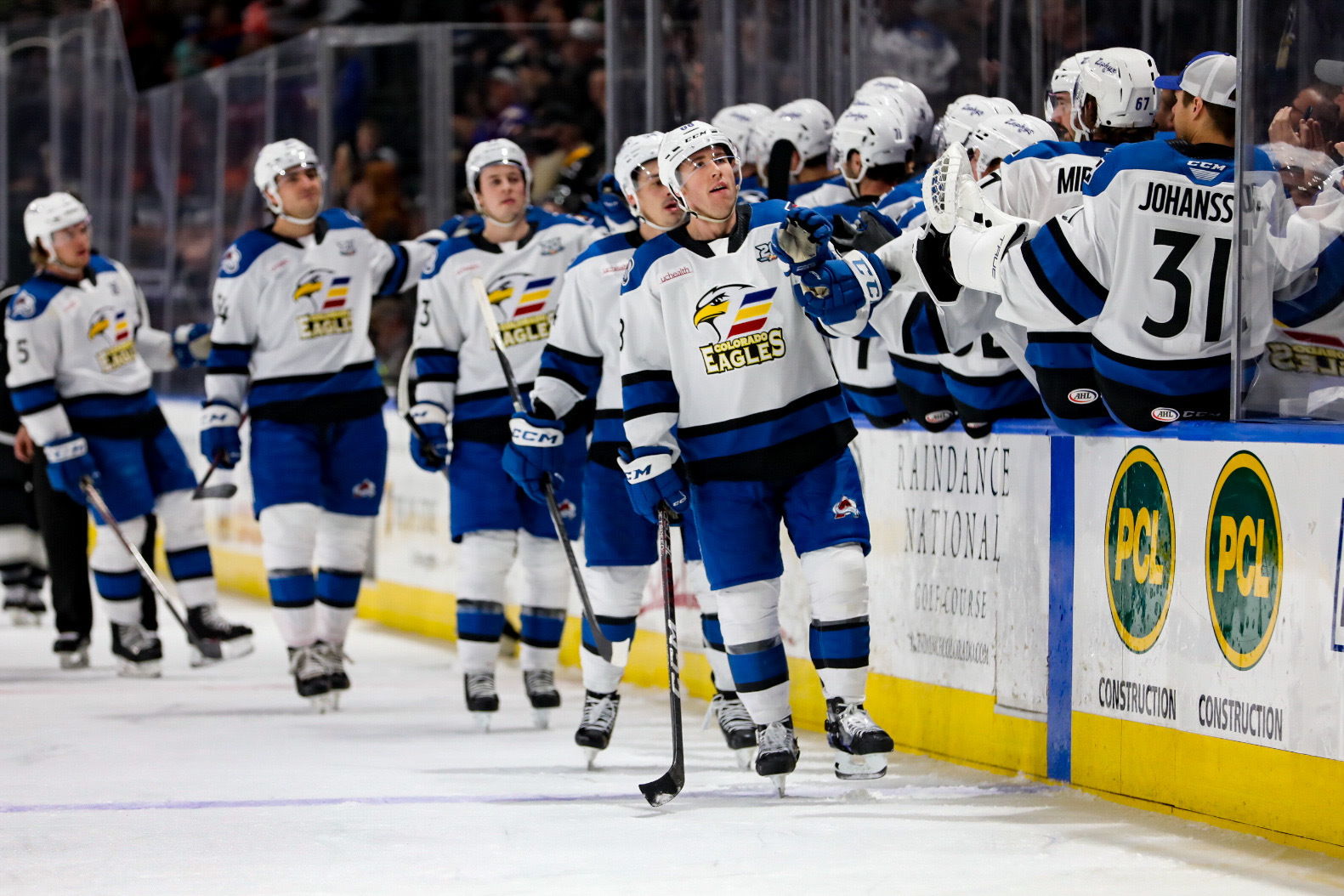 #AHL | With the injury woes of their parent club, a number of @ColoradoEagles players have the opportunity to produce with the Avs. @FPHEagles breaks down how the structure and success of the Eagles leads to success in the NHL

LOVELAND, Co. – Sitting at fourth in a division of ten teams is no small feat, especially considering the whirlwind of a season the Colorado Eagles have experienced. At 21-12-3-0 for the season, no one would be able to tell by the record that the entire roster as it was initially meant to be hasn’t been together all season. This is mostly due to the onslaught of injuries that the Eagles’ NHL affiliate, the Colorado Avalanche, has suffered this season.

The one good thing to come out of the recalls to the big league is the experience that a good portion of the Eagles’ roster has been able to get. That said, these experiences wouldn’t have happened for specific talent on the Eagles’ roster if it weren’t for the success that the Loveland-based team has found. That success was only possible with the talent showcased every game day for the Eagles by the skilled players across the roster.

An article highlighting talent within this organization can’t start with any player other than defenseman Brad Hunt, who has spent a considerable amount of the season in Denver with the Avalanche. This has been mainly due to the absences of Bowen Byram and Josh Manson, who have both been missing from the Avs roster since at least the beginning of December. Hunt received the recall to Denver on December 9th and has since played 18 games with the club. In those games, he has tallied four total points (two goals, two assists).

His NHL statistics become a bit of an outlier when compared with his statistics in the AHL. With the Eagles, he leads all defensemen on the roster in points (20), goals (6), and assists (14). This is even more impressive when you take into account that he only trails Eagles center Jean-Luc Foudy and left-wing Charles Hudon by 5 points, both of whom lead the team in points and have played at least 6 games more than Hunt.

Hunt, when with the Eagles, is a powerful asset on the power play and has great offensive awareness, which is evident given the number of assists he’s secured this season alone. Quarterbacking a powerful Eagles power play has prepared him well to perform on the power play with the Avalanche when needed. He was given an opportunity on the Avalanche’s second power play unit this past week as Colorado All-Star Cale Makar sat in the press box with an injury.

Though a lot of his success, not only on the power play, has been fostered by many different professional teams in the last 10 years. Not only has he spent time in Chicago, Oklahoma City, and Bakersfield with their respective AHL teams, but he’s also seen quite a lot of ice time with NHL clubs. The most time seen between the Vegas Golden Knights, the Minnesota Wild, and the Vancouver Canucks, where he resided before he came to Colorado during this past off-season and was signed to a two-way, two-year contract with the Avalanche worth $762,000 AAV.

This season, Martin Kaut has had the opportunity many AHLers dream of. Unfortunate circumstances with the Avalanche’s forward lines have demanded Kaut’s presence a few different times this season, where he has given underwhelming performances when compared to his shown skill set with the Eagles. His only goal and one of his two assists with the NHL club came against the Columbus Blue Jackets which has arguably been the only exciting performance he’s had at this level this season.

Martin Kaut (1:22), Logan O’Connor (4:13) and Devon Toews (4:50) combined for three @Avalanche goals in a span of 3:28 during the second period, the fastest three goals by one team during a game played outside North America.#NHLStats: https://t.co/HejLMHPKvu https://t.co/a0qmBouCBF

The 2018 draft pick has had a successful career with the Colorado Eagles, the most successful season of his career earned during the 2021-22 season where he recorded 31 total points, 19 of which were goals. During his rookie season, he recorded a career-high 14 assists with the team. These two seasons helped in making a statement on the team as not only an incredible playmaker but a powerful goal-scorer as well. These assets as a player make him very valuable in the eyes of this organization.

His first recall came in the 2018-19 season, where he made his NHL debut with the Avalanche and tallied 3 points in 9 games with the club before being reassigned to the Eagles and finishing the season there. He went on to help the Eagles to the playoffs, though only played two games during the postseason and came away from the two games with a single assist.

If and/or when Kaut makes his way back to the Eagles, he could find himself on pace to end the season with 38 points, which would give him a new career-high to add to his resume.

Despite not registering any points in the 2 games he’s played in Denver this season, there is a lot of potential in Cal Burke. He sits at third overall in points on the Eagles roster with, 11 of them being goals.

Though the scoresheet may say otherwise, Burke’s awareness on the ice is his most valuable asset. He always seems to be two steps ahead of the current play, and when received, he handles the puck with tremendous skill and grace – enough so to help his teammates put it in the back of the net, if he’s not taking care of scoring the goal himself.

Cal busts out some fancy moves and finds the back of the net 🎩#EaglesCountry pic.twitter.com/EITrUEboaP

Burke signed his second contract with the organization, a one-year-long signing worth $750,000 AAV, during the 2022 offseason.

Hudon was signed by the Avalanche during the 2022 offseason and has helped the Eagles achieve their current success in the league. He leads the team in goals (14) and is tied for first in points with forward and linemate Foudy, who leads the team in assists at 15. These two are a powerful combo when on a line together. Unfortunately, neither of them has had much luck with the Avalanche, but being so young in both of their careers and having incredible careers at the AHL level, worrying about their development seems unnecessary. The sky is the limit for these two.

To end off, there is no mention more honorable than one Justus Annunen, who despite the devastating 7-3 comeback loss against the Ontario Reign, has come up big for the team. He was recalled to the Avalanche during their cup run this past postseason when former Colorado goaltender Darcy Kuemper got injured, though didn’t see any ice time. Annunen currently sits sixth overall among goalies in the AHL, with a GAA of 2.37 and a SV% of 0.916.