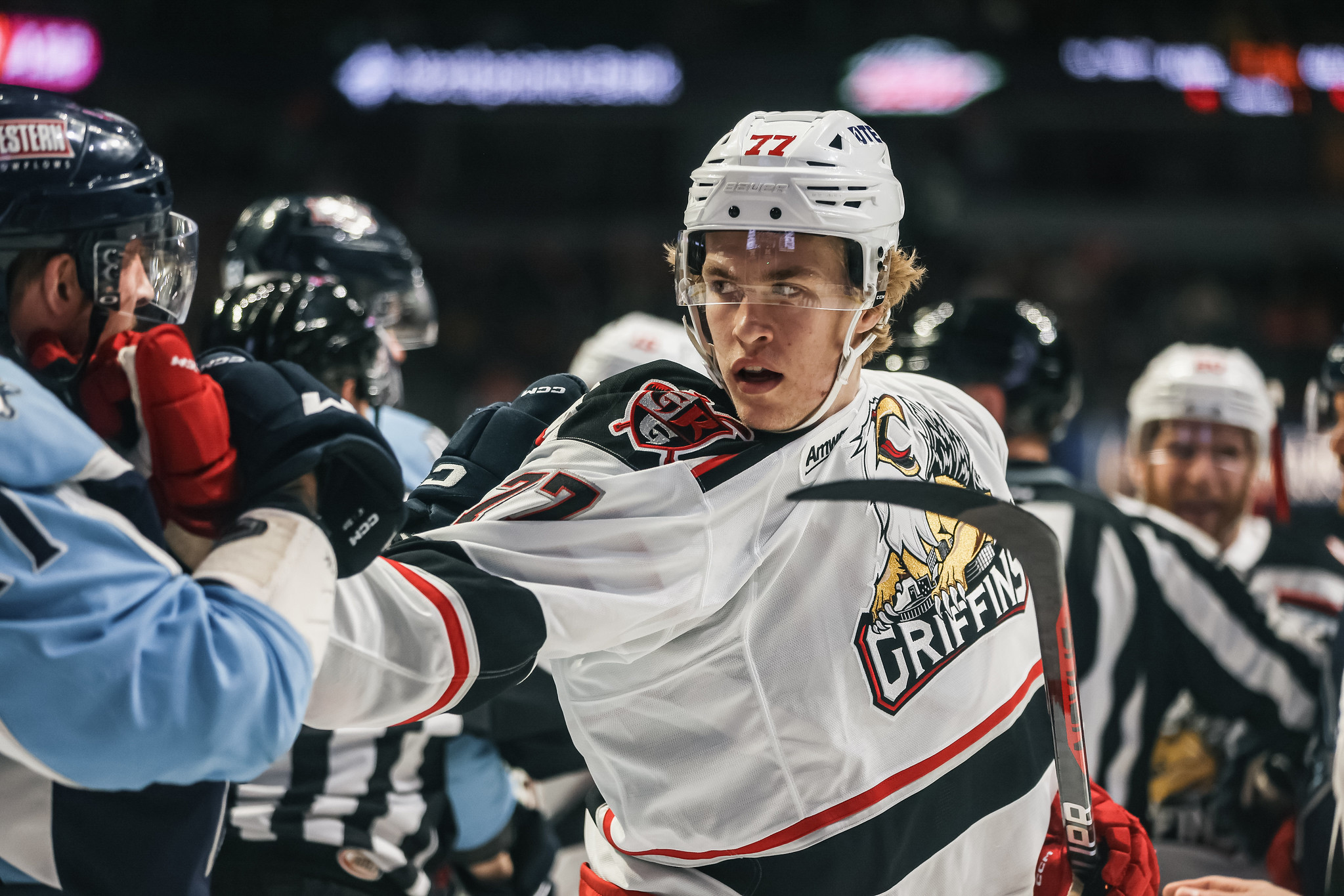 Admirals Ring in New Year by Sinking the Griffins

#AHL | New Year’s Eve in Grand Rapids was filled with fireworks, and at the end of the evening the @mkeadmirals flexed their muscle over @griffinshockey with a 4-2 victory. @FPHGriffins has the breakdown in his recap:

Admirals Ring in New Year by Sinking the Griffins

GRAND RAPIDS, Mich. – Less than 24 hours after Friday’s 4-0 loss in Milwaukee, the Grand Rapids Griffins were riding the bus to host the Admirals at Van Andel Arena. Following the poor showing in Friday’s loss, perhaps the quick turnaround would help the Griffins leave the past in the past and focus on the now.

“I think anytime you have less time to think about things, it’s sometimes a good thing but other times when you have more of a gap you have more time to work on things.” Head Coach Ben Simon said. “I thought tonight, regardless of the score, I thought our compete level was way more consistent and where it needs to be.”

Going into Saturday’s contest, both teams would be switching up the creases: Jussi Olkinuora would get the start for the Griffins across from Devin Cooley in the Milwaukee net.

The Griffins responded with a better effort, but it wasn’t enough as the Admirals took Saturday’s contest by a final of 4-2 to send Grand Rapids into the 2023 calendar year on a three-game losing streak.

Early on, both teams tried to establish their physicality to set the tone in this game. Forwards were met by defenders at the net with gloves and sticks going up from the first few whistles. Just over ten minutes in, Wyatt Newpower laid a heavy, open-ice hit on Jordan Gross that was followed by a challenge by Jachym Kondelik. Both players dropped their gloves, with Newpower laying most of the blows for a well-earned five minutes for both players.

Milwaukee responded to the physical play with offense. Winning a battle along the boards, John Leonard skated into the middle and let a shot rip that beat Olkinuora over the glove and broke the ice in this one.

Grand Rapids countered just a minute later – a feed from Joel L’Esperance found Pontus Andreasson in the slot, and his wrist shot went off the iron and in to tie the game at 1-1.

Pontus Andreasson gets us on the board with the Deposit of the Game! @betPARX @PlayGunLake | #GoGRG pic.twitter.com/wiUx8h2EnM

The physical play continued even from unlikely sources – on the next shift, Tommy Apap mixed it up in front of the Griffins’ bench with Jakub Vrana, playing his third game of his conditioning stint with the Griffins.

“It’s fine. I’ve got hit before.” Vrana said about adjusting to the physical game.

As the period wound down, Vrana was set up by Taro Hirose for a blistering one-timer, but Cooley stretched over and robbed Vrana for his biggest save of the night.

STOP SCROLLING❗️
Ya’ll gotta watch this save from Cools. pic.twitter.com/dXJiqcuPDE

That play would stand out even more considerably as Phil Tomasino would get behind the Griffins defense and beat Olkinuora with just two seconds on the clock to give the Admirals a 2-1 lead heading into intermission.

For your intermission entertainment we present to you, Phil’s 1st period goal. pic.twitter.com/eeZkSQuF8Z

The physicality carried over into the middle frame, where Newpower made his presence felt again. Throwing another heavy hit on a vulnerable Admirals player, Jimmy Huntington responded with immediate gloves dropped and punches being thrown once again. Newpower would receive seven minutes for the fight and a check to the head, while Huntington was hit with an instigator and a ten minute misconduct for starting the altercation.

The Griffins had their chances but couldn’t find a way to beat Cooley. Opportunities from Tyler Spezia on the rush and Kyle Criscuolo on the follow up were turned away, but their continued effectiveness saw Coach Simon lean on their line along with Dominik Shine to set the tone.

“Shine and Spezia, when they’re on their game they are really solid two-way players in the American League.” Simon explained of his energy line. “Shiner’s physical, Spezia’s fast, Crisco’s responsible. Each one of those three brings a different element. Crisco did extremely well in the faceoff dot, he had a good night there.”

This period would see another last minute goal courtesy of Griffins captain Brian Lashoff – he let a long range wrist shot go from just inside the blue line that found its way through traffic and past Cooley for the 2-2 score with just 20 seconds left on the clock. The Griffins – outshooting Milwaukee 28-18 through two periods – were hopefully grabbing some momentum for the final frame.

The Griffins again found themselves with chances to beat Cooley but either not converting or fumbling pucks to prevent a better look at the net. The best look came from Danny O’Regan on a backdoor feed from Simon Edvinsson that just wasn’t handled cleanly and as a result Cooley was able to get across and make the save.

The missed chances would eventually come back to bite Grand Rapids. With Criscuolo – one of the better penalty killers on the team – in the box, Luke Evangelista batted home a bouncing puck past Olkinuora to once again put the Admirals ahead at 3-2.

This time, the Griffins couldn’t find a response. Even with Olkinuora to the bench for the extra attacker, the Griffins couldn’t set up and get a quality look in on Cooley. Leonard would eventually deposit his second of the night into the empty net for the 4-2 final in favor of the visiting Admirals. Grand Rapids heads into 2023 on the heels of a three-game losing skid.

“We lost three games.” Vrana said of his time. “I didn’t play well. That’s the reality and I’m going to face it. I got to get better. Whatever I need to do, I will do.”

The Griffins kick off 2023 hosting the Cleveland Monsters on Wednesday, January 4th – the game originally scheduled for December 23rd.