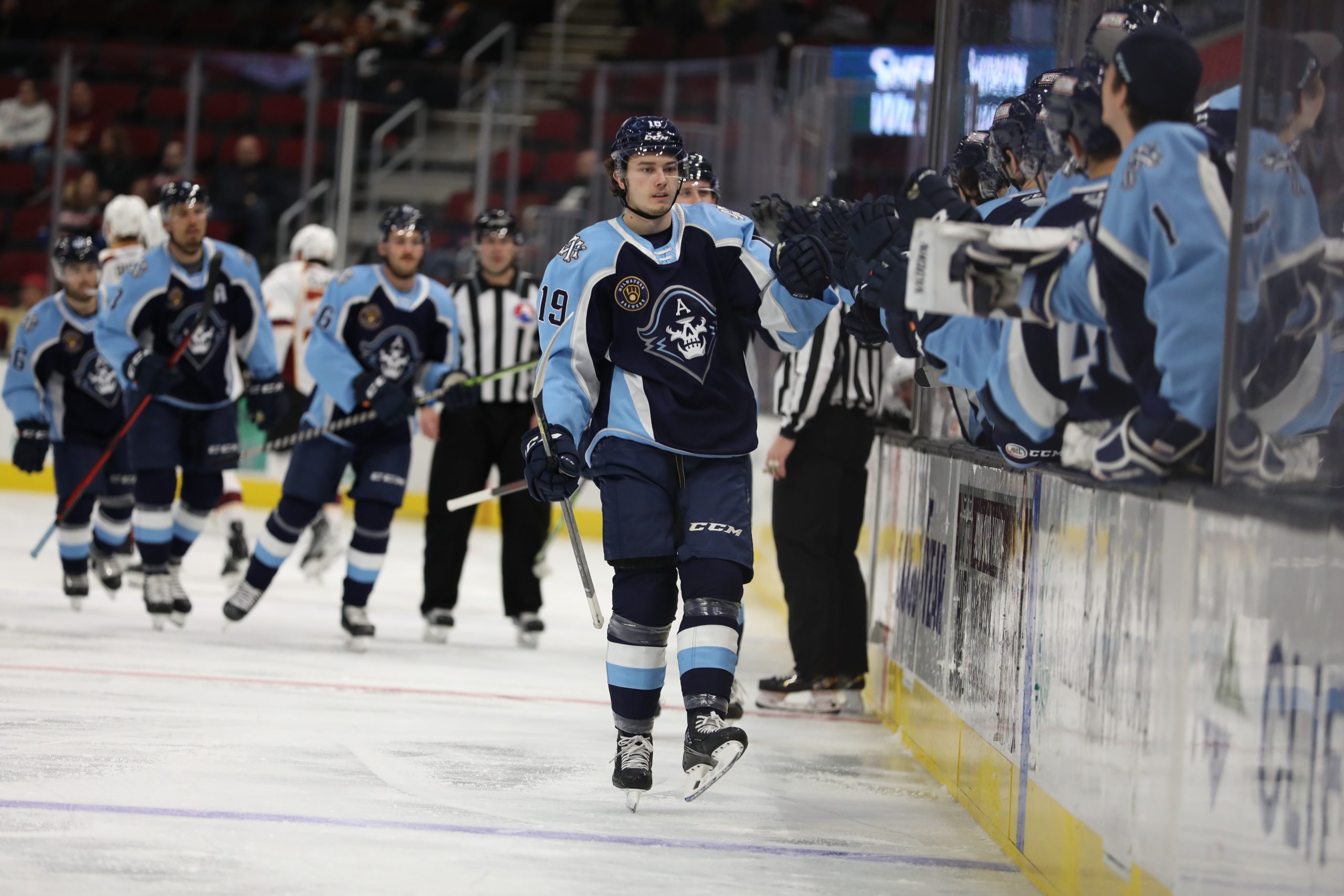 Admirals Use Three Goal Second to Pull Away from Monsters

Admirals Use Three Goal Second to Pull Away from Monsters

CLEVELAND –  The Cleveland Monsters and Milwaukee Admirals played each other Friday night for the first time in 599 days. Thursday, Emil Bemstrom was assigned to Cleveland by the Columbus Blue Jackets. Would he make his presence felt? Who would win the first matchup between these two clubs in nearly 23 months? Could Cleveland extend their point streak to six games?

The Admirals got off to a quick start scoring just 85 seconds into the game. Cody Glass won an offensive zone faceoff back to  Matt Tennyson who passed to Jeremy Davies who just flicked the puck at the net, it deflected off of Glass who had made his way to the front of the net and in. As former hockey great Wayne Gretzky said “you miss 100% of the shots you don’t take.” This goal was a pure example of that, the shot was nothing more than just a way to get the puck towards the net and it wound up in the net.

Thanks to AHLtv for the clip. Fluke goal. Miss 100% shots you don't take. Glass gets credit with the goal pic.twitter.com/udseMto9RI

That was one of eleven shots the Admirals put on the net in the first ten minutes of the period. Milwaukee just shot the puck at every chance they got. There was very little passing in the Admirals game.

Later in the first, Cole Clayton made perhaps the cleanest defensive play of the year on former Monster Kole Sherwood who was on a breakaway. Clayton dove and managed to knock the puck off Sherwoods’ stick without tripping him. It was a thing of beauty.

Thanks to AHLTV for the clip pic.twitter.com/Bq0jvrlDX5

Milwaukee’s dominant first period was due to two things. First, they were very physical, every chance they got they were laying hits on Monsters. It was something Cleveland wasn’t prepared for and it showed as they couldn’t find a good rhythm. The second thing the Admirals did is give Cleveland very little open ice to work with.

If you took a look at the box score you might ask yourself, how bad could have the first been? Cleveland had eleven shots on net. That they did, however, they were all quick looks. There was no extended time in their offensive zone. If you want to find a positive for Cleveland in the first it would be that they only allowed two shots in the final ten minutes of the period.

Milwaukee would bring their dominance to the second period. It helped that they would get a five-on-three advantage for 62 seconds to start the second. With just twelve seconds left on the two-man advantage, the Admirals would score. The goal was a direct result of there being a lot of open ice for Milwaukee to work with, Rocco Grimaldi fired a wicked wrist shot just under the glove of Jean-Francois Berube to extend the Admirals lead.

Milwaukee would extend their lead just over two minutes later at the 3:03 mark of the second. Michael McCarron was able to dig the puck out of a board battle going on to the near side of Berube, he then made some really nice stick moves to dance around a couple of Monsters defenders and flip the puck over Berubes’ left shoulder from the slot.

Michael McCarron gets the goal. Unassisted. Thanks to AHLTV for the clip. #MILvsCLE pic.twitter.com/W4fSFaUtu0

Milwaukee though continued to apply pressure and they got another quick goal just under five minutes into the second. Grimaldi was able to sneak behind the Monsters’ defense, Glass slid the puck up to him and he beat Berube five-hole which extended the Admiral lead to 4-0.  As a result, Berube was pulled, and Jet Greaves entered the game for Cleveland.

Thanks to AHLTV. Giovanni Vallati lost his man which led to the goal by Roco Grimaldi#MILvsCLE pic.twitter.com/jYRBX22cLu

Berube had a tough outing Friday night, nothing was really going his way. He had a couple of tough goals go in against him that he would probably want back. Assistant coach Trent Vogelhuber mentioned it was pretty clear after the third and especially the fourth goal that it just wasn’t Berube’s night it was time to give Jet Greaves an opportunity.

Three goals in just under five minutes of the second period really quieted down what was rather an energetic crowd in Cleveland. Milwaukee, however, really seemed to let their foot off the gas quite a bit after this goal. Instead of constantly attacking the net they moved to more of a dump and chase style offense and focused a lot more on defense.

Something that was interesting though and was definitely note-worthy, is Cleveland looked better in the second half of each period. Milwaukee again managed ten shots within the first ten minutes, only to get two shots in the final ten minutes. The Monsters lagged it seemed in the opening half of both of the first two periods, only to gain speed in the second, and get more offense in the second half of the periods. This in a way plays into Vogelhuber’s comments he would make at the post-game media scrum about not being ready to start on time.

Cleveland Gets on the Board

Cleveland wasn’t going to go away quietly though, as they definitely came out looking to score in the third period. It took them 54 minutes of gameplay but they did just that late in the third period. Tyler Angle started off in the Monsters defensive zone he skated all the way through to their offensive zone before doing some nifty stickwork to flip the puck over Connor Ingram’s shoulder. Greaves actually tallied his first professional point on the secondary assist to angles’ goal. A bright spot on what was a terrible night for the Monsters.

Thanks to AHLTV for the clip pic.twitter.com/0Sg53vOiXv

Angle’s goal would be the final one of the game as Milwaukee took the victory 4-1. Vogelhuber succinctly summed up the effort: