The Norfolk Admirals opened the 2019-20 season with back-to-back losses, however, fans and players remain upbeat and look to the positives 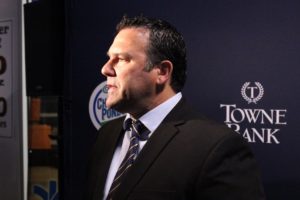 NORFOLK, Va. –  The Rod Taylor era of Norfolk Admirals hockey officially got underway Friday night, however; the Admirals dropped both of their back-to-back contests to the Florida Everblades.
On Friday, Norfolk fell one goal shy of a comeback as the Everblades came out victorious 4-3. In Taylor’s ECHL coaching debut, he saw goals from River Rymsha, J.C. Campagna and Josh Holmstrom.  Norfolk was also strong on the PK as they erased all six Everblades powerplay chances. Additionally Holmstrom’s goal came on the powerplay.
On Friday, Taylor commented on his team’s performance,

“The first period was the one that killed us. We got off to a good start getting the (Rymsha) goal. We took some bad penalties that took the momentum away from us and they capitalized. They got three goals off the momentum that they had. The second and third period I thought we played really good. We played intense and we got ourselves moving. The second and third period gave us a fighting chance to get back into this game, but we fell a little short.”

On Saturday, the Everblades were victorious again beating the Admirals 5-2. This time Norfolk received goals from forwards Alex Rodriguez and Philippe Hudon. Rodriguez’s goal came on the powerplay.
On the positive side of things, prior to the Admirals taking the ice on Friday, the coaching staff gifted veteran forward, Ben Holmstrom, with the captain “C”. Holmstrom is no stranger to leading a team, as he captained the Bridgeport Sound Tigers for several seasons in the AHL. Although he’s in the ECHL now, he still calls it a privilege to wear the C.

“It doesn’t change the way I go about my business. At the same time it’s always something I’ve never taken lightly on any team I’ve been on. I think it’s a privilege and a lot of responsibility and something I take pride in.”

Even though Norfolk dropped both contests, Admirals forward Christian Horn quickly pointed out that the core of Florida’s players have been playing together for a couple of years, while Norfolk has only been together a short time.

“Florida is a good team. They’ve been together for a couple years. This team has been together for 13 days. We have a lot of learning to do about how we play hockey together. That comes with time and practice. It’s only going to get better. No one likes losing, I hate losing.”

Horn has also seen positive changes since Patrick Cavanagh took over team from old owners, the Mango Media Group, which was based in New York.

“Kudos to Patrick Cavanagh. Whenever I go to him he says ‘what do you need?’ Which has never been asked to me before especially in the ECHL. On a lot of teams that doesn’t happen. That’s a refreshing question and a great question for an ECHL guy to have because you have someone who is looking out for you. Which you don’t quite get in this league sometimes.”

On the fan side of things, Buddy Dunson, a long time season ticket holder, has been impressed by the new ownership long before opening night.

While Dunson talked about the off ice aspect, he also knows that part of reestablishing that winning tradition starts on the ice.

“It all boils down to what they put on the ice. On paper they look great. They have some veterans and they have some youth. They’ve made some great acquisitions, trades, and signings. If those guys can do as well as they can say on paper I think we’ll have a good chance to win.”

Despite dropping both games to the Everblades, Norfolk has another chance to reestablish the winning tradition on the ice as they travel to Florida for a pair of back-to-back games against the Orlando Solar Bears and oddly enough the Florida Everblades.