TORONTO – With the 2019-20 AHL season officially cancelled as of May 11, Toronto Marlies correspondent Zack Power did a little hypothesizing, taking a stab at who he thinks would have advanced in the Calder Cup Playoffs from the AHL’s Eastern Conference.

In addition, we ran the third round through a digital simulation as well. Utilizing Playoff Mode on NHL 20, every series was simmed game-by-game for an another layer of postseason prediction.

BELLEVILLE PROS AND CONS
Pros: I mentioned in my previous piece the talent of rookies Josh Norris and Alex Formenton, but what I didn’t mention is Belleville’s ability to pot goals. Having scored 234 goals on the season, the B-Sens have lit the lamp more than anyone else in the league. What shocked me the most? The Senators have scored 23 more goals than any opponent, with the next highest team at 211 goals for (Milwaukee).

Cons: Having a power play is, in my opinion, one of the most critical keys to a team. It gives you the opportunity for nearly two minutes to blast shots on the goalie without hardly breaking a sweat. Having a successful power play is what makes it great.

The counter? A penalty kill that can clear the puck and keep it out of the danger zone. Holding a successful penalty kill is something that the Sens haven’t been able to do. Marking in at 80.1% (24th in the AHL), it’s been spotty through the regular season. For Belleville, they’ll need to be able to kill off penalties if they want to punch their ticket to the final.

HERSHEY PROS AND CONS
Pros: Hershey’s goaltending has been eye-catching all throughout the league in 2019-20.  Vitek Vanecek has been able to keep his goals against average at 2.26 (with a team GAA at 2.53 to put Hershey at third in the AHL).

Cons: One of the biggest mountains that the Bears are going to have to climb is their power play. Sitting at 23rd in the AHL, Hershey has only been able to convert 16% of the time. Having any kind of power play is a good chance to distract the opponent. A special advantage gives you the chance to get ahead by a goal or even grab a few insurance markers. With the Bears only capitalizing 33 times through their 206 advantages, it can spark a momentum swing when the opposition can’t convert.

SERIES PREDICTION
The Senators share many qualities with the 2019 St. Louis Blues. In the same breath, they’ve had to face the same quality opponents through the first two rounds of the playoffs and fared well to get to their position. 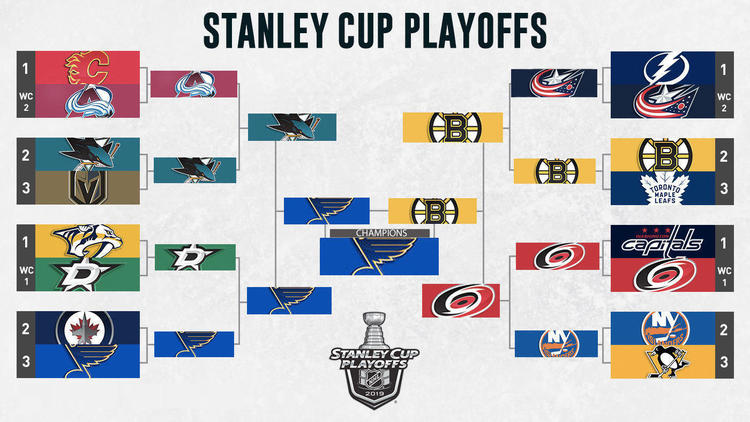 The Blues’ third round opponent was San Jose, who had a tough time in the previous round against a powerful Colorado squad. In the Western Conference Final, San Jose was visibly gassed, and that same theory can be applied in our hypothetical scenario. Hershey would have had a tough series against Providence, and I believe that it would have taken at least two games for the Bears to find their structure once again.

Additionally, like St. Louis, Belleville overcame adversity in the regular season and made a similar 180-degree turn. In Week 5 of The Sin Bin’s AHL Power Rankings, Belleville was ranked 24th in the league, giving them a similar kind of trajectory.

For our last hypothetical pick in the Eastern Conference, we stamped Belleville’s ticket to the Calder Cup Finals, reaching it in six games.

NHL 20 SERIES SIM – CHARLOTTE vs. BINGHAMTON
NHL 20 yet again had a different cast of characters in the Eastern Conference Final, with the Chicago Wolves taking on the Binghamton Devils.

Binghamton took their first round series with Belleville to all five games. They also took their second round series against Rochester to all seven games. Why not go the distance in the Eastern Conference Final, as well?

As the Devils took Game One by a score of 3-2 in overtime, the Wolves would win three consecutive contests in Games Two through Four (4-1, 4-1, and 3-1) to leave Binghamton teetering on the edge of being bounced from the playoffs. But, as they’ve done all simulated postseason, the Devils did not quit. Wins in Games Five through Seven (3-1, 2-0, and 3-2) push Binghamton into the PS4’s Calder Cup Finals.

Stay tuned to The Sin Bin for our “What If” 2020 AHL Calder Cup Finals match-ups! Follow Zack on Twitter for his continued coverage of the AHL’s Toronto Marlies. And, don’t forget to follow the rest of #TeamSinBin on social media via Facebook and Twitter!