DENVER – After a Wall Street Journal article ran last Wednesday detailing current Colorado Eagles equipment manager Tony Deynzer dressing in blackface in 2011 at a Halloween party, then-Eagles defenseman Akim Aliu has now collaborated with Colorado to issue a joint statement concerning the situation.
Colorado had released an apology on social media Wednesday afternoon after news became public regarding both the Halloween party in question and Aliu’s discomfort with the situation as a man of color. A conversation with Eagles CEO Martin Lind, one Aliu referred to as a “tough one but a necessary one”, yielded an outcome to further encourage racial acceptance and equality in hockey.
In conjunction with Lind, Aliu discussed the incident and “focused…more broadly on promoting diversity in the sport at all levels”, and that the two “have agreed to work collaboratively to effect positive change with the sport”.
Lind was compassionate and contrite after his discussions with Aliu:

“Akim has presented to me such an honorable position it solidifies my appreciation for his journey and my optimism that our path forward will be incredibly productive and historic. Listening to [him] was both emotional and inspirational and a very moving moment in my career. I let him know how sorry we were as an organization and how it no way reflected our values.”

Aliu did not mince words when it came to what this situation and resulting conversations mean for the future:

“I believe that we must confront racism head on. I believe the time for big positive change in the sport has arrived and that this moment can promote diversity, inclusiveness, and safety in the sport and in our community.”

Aliu has accepted both Lind’s and Deynzer’s apologies, and also requested that Deynzer not lose his job. The Eagles full press release is included below. 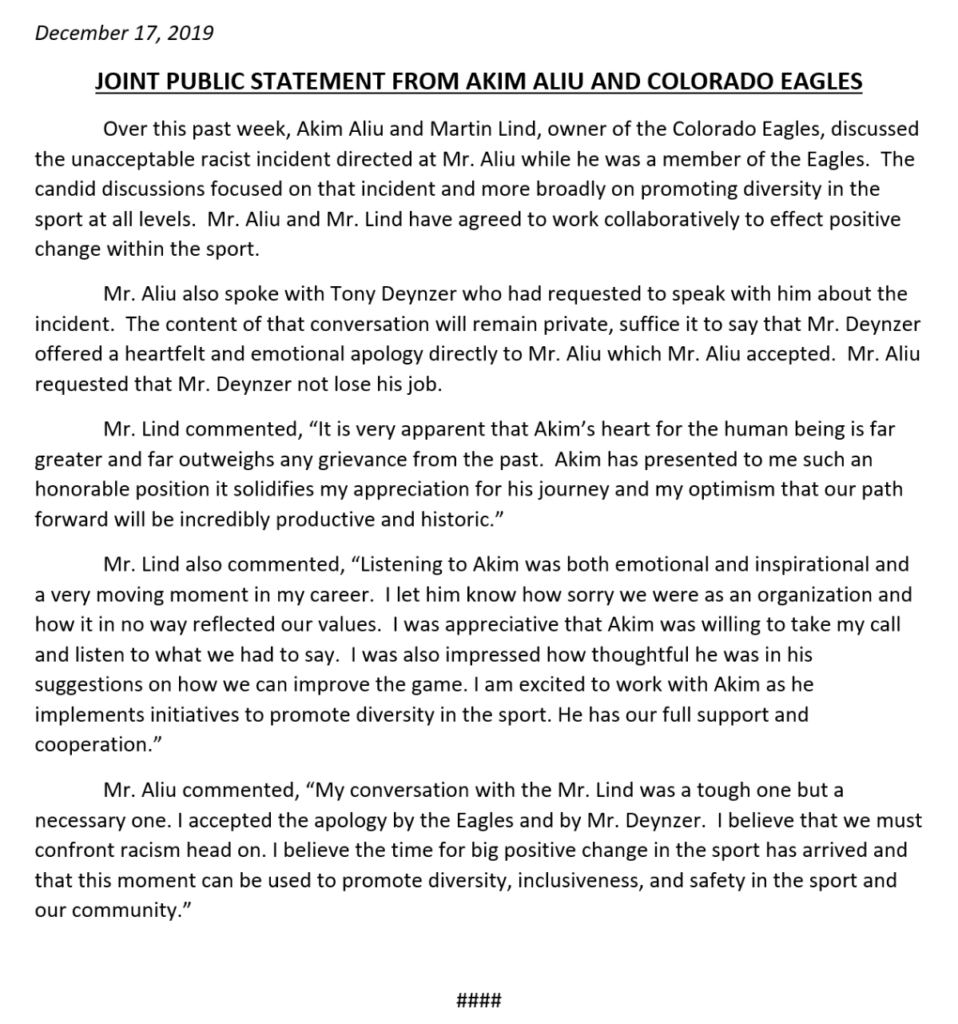 Follow The Sin Bin on Facebook and Twitter for all the latest news and notes from the AHL, ECHL, and SPHL levels of minor league hockey.