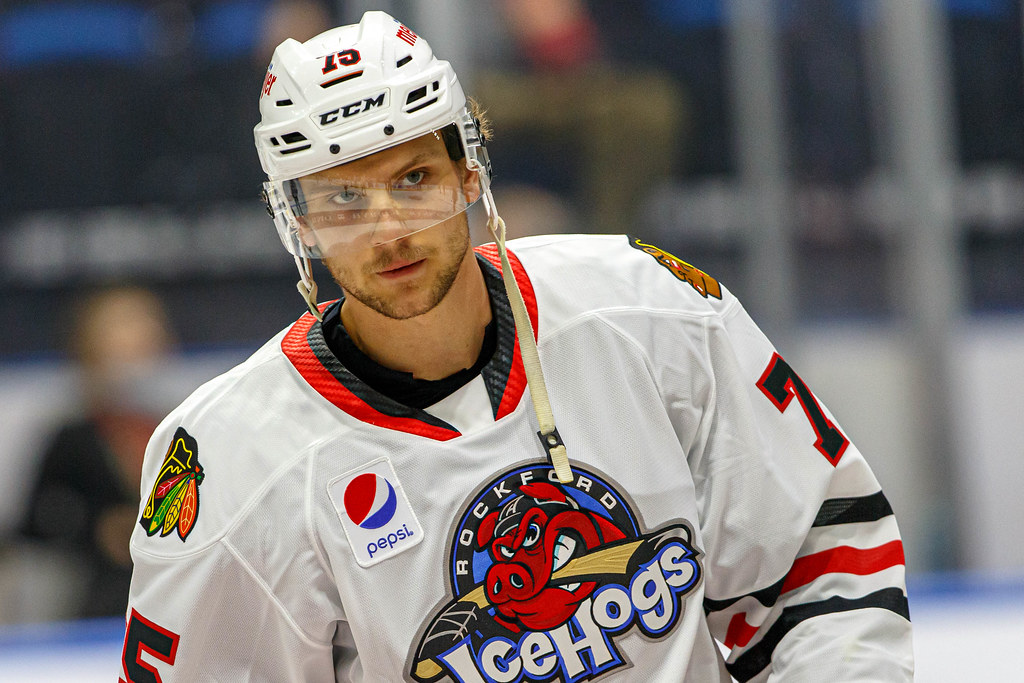 ROCKFORD, Ill. – Chicago Blackhawks defensive prospect Alec Regula‘s 2021-22 season is just getting started. Having recovered from a preseason back injury, the 21-year-old is hoping to get back to the business of establishing himself in the AHL.

Regula got his first taste of game action on November 12 in the IceHogs’ 4-1 loss to Chicago. In his season debut, he was held off the scoresheet, but Regula was relieved to get back into the mix.

“It was good to get the first one under my belt,” Regula admitted this week at Rockford’s media day. “It was a grind, but that’s just what it takes to get back to 100 percent. I’m just working my way there.”

Regula was Detroit’s third-round selection in the 2018 NHL Draft. The Blackhawks obtained him on October 28, 2019, in exchange for Brenden Perlini. At the time, Regula was beginning his final season of junior hockey in which he put up 60 points (27 G, 33 A) in 56 games with the London Knights of the OHL.

The 6’4″, 207-pound blueliner got his pro career underway with the IceHogs in last year’s abbreviated 2020-21 campaign. Injuries limited him to 16 games, where he posted three goals and an assist. Chicago brought him up to the NHL roster for the team’s final three games.

“I think just getting those games is huge for me because it makes you believe even more I can play at this (NHL) level,” Regula said. “You spend so much time growing up watching the NHL or even now watching the NHL all the time. It’s one thing to watch it, but once that day comes where you play, for me, at least, I kind of realized it’s not out of reach whatsoever.”

Regula missed most of training camp with his back issues, which kept him from being assigned to Rockford until October 14. He realizes that he has some catching up to do.

“I think it’s good to kind of put it behind me and get back to just playing hockey, doing what I love,” he said. I’ve just been getting my legs back, you know. It doesn’t just happen overnight; it takes a while, so I’m still just in the middle, getting my lungs back and my legs, getting back into playing shape.”

The Blackhawks are looking for Regula to get a full season of development with the IceHogs, who have several young defensemen hoping to break into the Chicago lineup in the near future.

“Most of our D down here have NHL experience, so we all kind of have that same mindset,” Regula points out. “It’s a good, competitive environment.”

Rockford’s interim coach, Anders Sorensen, believes Regula to be a difference-maker once he gets up to speed this season.

“He’s a big, rangy kid,” Sorensen explained, “so defensively he can get stops. He kills a lot of plays in the D-zone, and his first pass. He has a knack for making really good little outlet passes. If it’s a short six-foot pass, if it’s a long stretch pass, I think he has that in his arsenal. I think that helps any team out.”

Regula hopes to start picking the brain of new IceHogs assistant Jared Nightengale, who was hired earlier this week. Nightengale spent the 2013-14 season as Rockford’s captain and spent over a decade in the AHL and ECHL as a defenseman. Regula is excited at the prospect of working with a coach that he has a bit of familiarity with.

“He just seems to have a good grasp on running the D side of the bench,” Regula said. “He coached against me in the OHL when I was with the London Knights and he was with the Saginaw Spirit, so he knows my game a little bit. He’s played here, he’s been here. He’s played pro for ten-plus years,” he continued. “He’s done the things that we’re doing right now, so he just has that extra experience. He’s only been around for a little bit, but I’ve gotten the chance to chat with him for a while. We’re both from Michigan; he played at Michigan State. We have some similarities there.  He knows what to expect, at least from me.”

Regula, like many of Chicago’s prospects, needs time to make good on their pro potential. That said, he is confident he has what it takes to work his way into the Blackhawks defensive corps.

“It’s not that crazy to be a regular in that league, he said. “The difference between the AHL and the NHL is very slim. I think the biggest takeaway for me is, you know, I can play here and I think I can make a difference up there. It starts here, and that’s kind of the takeaway. You gotta play well here to get up there.”

Regula and the rest of the IceHogs squad return to action in this weekend’s home-and-home with the Wolves. Rockford hosts Chicago Friday night before the series moves to Rosemont’s Allstate Arena Saturday.