ALLEN, Texas – Allen beat a shorthanded Rapid City team 3-2 last night before a crowd of 1882 at the Allen Event Center in a game that will always be remembered as the night Riley Gill‘s #30 was retired.

The Americans outshot the Rush 41-27 but had to score two third-period goals to claim victory. Tyler Sheehy scored the game-winner with 3:58 left in the game.

A win is a win, but taking on a team playing four players short and playing with several others who were just signed this week, you would have expected Allen to have an easier time sweeping the two games against Rapid City this weekend. It is early in the season, and with the talent on Allen’s team, they will only get better and to be fair, the stats show the Americans are second in goals per game (3.67), fourth in goals allowed per game (2.67), and second in shots per game (36.00) in the ECHL. The power play continues to struggle, going 0-2 last night and is now at 10% (1-10) over the first three games.

– Allen’s depth continues to show as the three goals scorers last night all scored their first goal of the season. After three games, the Americans have scored 11 goals by nine different players. After three games, 16 players have at least one point.

– Allen’s sweep this weekend vaults them to a tie for fourth place in the standings with a record of 2-1-0-0. Florida leads the league with a 4-0 start. It is early in the season, but Florida already looks like a team to beat after having the best record (tied with South Carolina) last season. The Everblades have scored an average of 5.25 goals per game; the next closest team is Allen at 3.67 goals per game. Florida has allowed only seven goals in four games for an average goals allowed of 1.75.

– The Americans put together a nice tribute to Riley Gill last night as they officially retired his #30 during the first intermission. A video from many of his former teammates and coaches was a nice touch, as was the framed jersey presented to Riley. It was good to see and hear from many of Riley’s teammates from the Kelly Cup championship seasons. 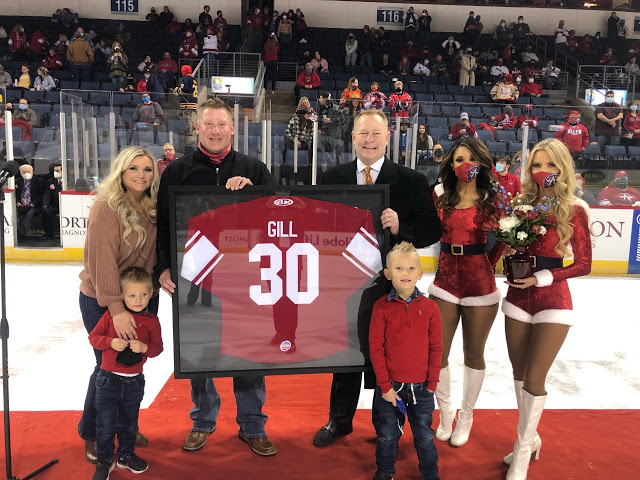 All-time games played (regular season and playoffs) by Allen goalies, another record owned by Gill by a wide margin: