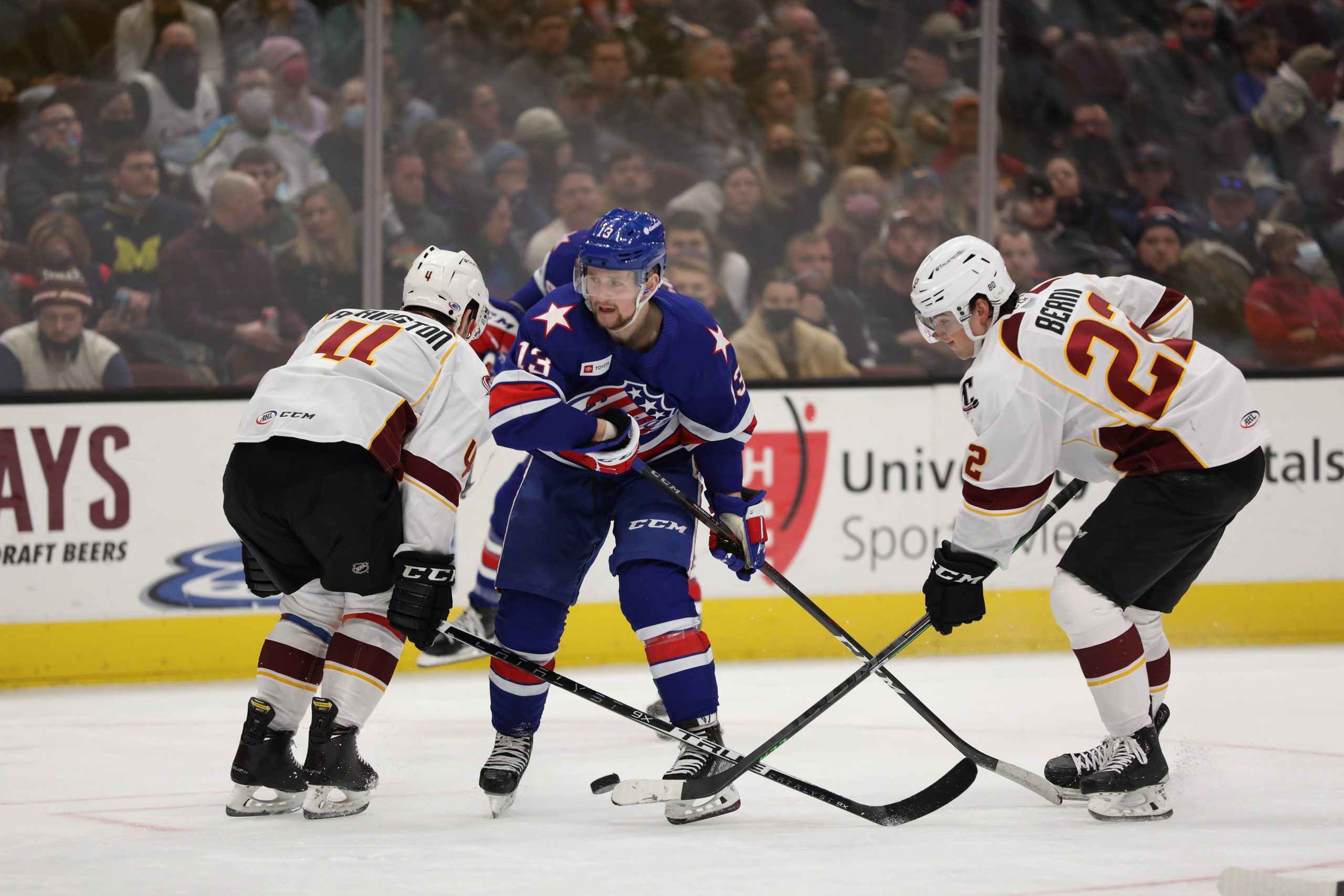 Coming into Friday’s game against the Rochester Americans, the Cleveland Monsters had not won a home game in nearly two months

CLEVELAND – Coming into Friday’s game against the Rochester Americans, the Cleveland Monsters had not won a home game in nearly two months. In fact, their last home win came on November 26 against the Toronto Marlies. Something that wouldn’t help the Monsters is the fact they would be without Josh Dunne and Trey Fix -Wolansky, who are both out with injuries.

For a team searching for their first win in almost two months at home, the Monsters didn’t get off to a great start. The Americans had five shots within the first 90 seconds of the game.

Rochester would break the ice getting on the board 4:13 into the first. Kevin Stenlund couldn’t hold the zone after a pass from Adam Helewka. The errant pass allowed JJ Peterka to get on a breakaway, he deked Jean-Francois Berube out and scored flipping it over his right pad.

The goal wasn’t a shock, as the Monsters were allowing grade-A opportunities to the Americans often to start the game. Assistant coach Trent Vogelhuber said in the post-game scrum “the team just wasn’t ready to start. The energy just wasn’t there.”

The Americans dominated the first period. But it wasn’t all because of how they played. Cleveland got stuck in their zone multiple times because they could not clear the puck. Another thing that led to issues for Cleveland was their passing, so many passes were errant or winded up on American sticks. Cleveland spent more time chasing the puck than they did being in control of it.

Cleveland looked much better to start the second period. For the first time in several games, they controlled a chunk of play. Despite the early Monsters’ dominance, Rochester would score first in the second.

Off an offensive zone faceoff win to start a power play, Brandon Biro shot the puck very softly from just inside the right faceoff circle, it went off Berube’s pads and onto the waiting stick of Arttu Ruotsalainen in front who fired it into the back of the net. This was a clearly designed play by the Americans, Biro had no intent to put the puck in the net, it was all about setting up the rebound chance.

Cleveland kept fighting, continuing to dominate the play through the period.

They would eventually break the ice at 17:38 of the period when Brendan Gaunce scored thanks to a little help from the Americans. As Helewka entered the Monsters offensive zone, he passed the puck to Gaunce who was streaking down the right side, he would then attempt to return the puck to Helewka on a centering feed. However, Rochester defenseman Jimmy Schuldt tried breaking up the pass, and as a result, deflected the puck into his own net. It was a powerplay goal for Cleveland.

Whatever was said in the locker room between the first and second definitely lit a flame under the Monsters as the team looked night and day from the dismal first period they played. The Monsters held Rochester to just five shots in the second, while firing off 12 shots themselves.

The big difference seemed to be the passing for Cleveland which was much sharper in the second. The improved accuracy lead to increased time in their offensive zone with the puck to run some plays and get better chances than they had in the first. There were also five minor penalties between the two teams in the second. So, lots of rotation on the ice which seemed to help Cleveland keep their head in the game.

Rochester started the third firing on all cylinders, where they would extend their lead at the 2:51 mark into the period. Linus Weissbach was knocked off the puck by Cole Fonstad just inside the Americans zone. However, the hit while knocking Weissbach off the puck, was directed onto the stick of Ara Nazarian, who cut to the middle and slid the puck through the five-hole of Berube. This is a goal no doubt Berube would want back.

Cleveland, to their credit, wouldn’t let this goal kill their confidence. It served as almost a wake-up call to them, as following the goal they would return to second period form. The urgency Cleveland showed the remainder of the third was perhaps the most urgent the team showed all year. The Monsters tried setting up multiple plays to get clean looks on the net but they just couldn’t find the back of the net.

In the dying seconds of the game, former Monster Ryan Maclnnis would score an empty-net goal to make it 4-1 which would be the final score.

Despite the loss, Cleveland for the most part played very well. The first period was the only bad spot for them. Cleveland in the second and third were flying on all cylinders they just couldn’t solve the Americans and Robson.

A major bright spot for the Monsters was the penalty kill which was struggling. They held the league-leading Americans on the powerplay to 1-for-5 on the man-advantage.