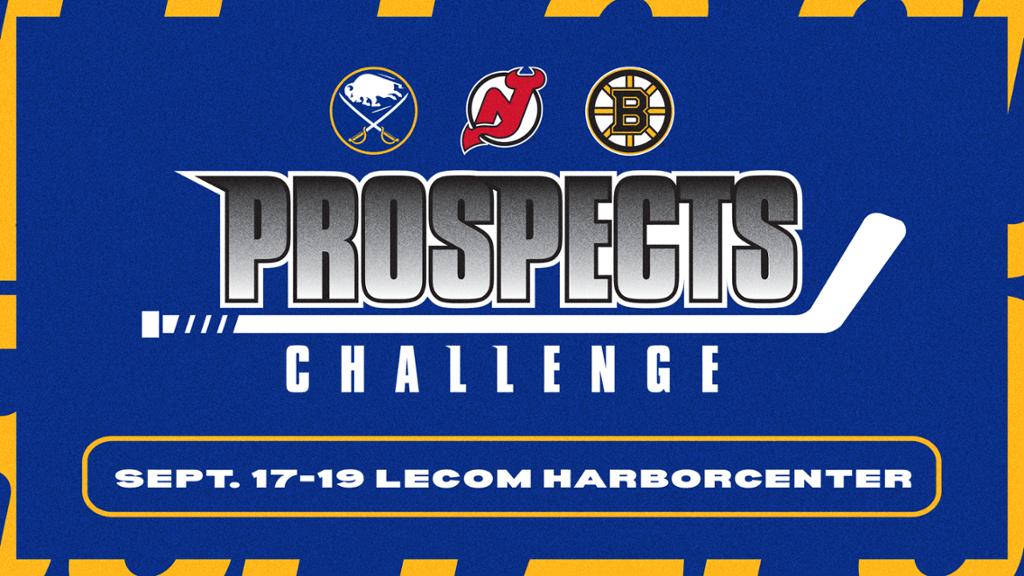 BUFFALO, N.Y. – According to Amerks’ Head Coach Seth Appert, the Buffalo Sabres’ performance in the Prospects Challenge hosted by Buffalo this past weekend proved one thing –

There’s no denying that the Sabres’ prospects came to play, as the Sabres split games against the New Jersey Devils and the Boston Bruins this weekend. Of course, some of Buffalo’s top prospects, such as Owen Power, were absent from the Prospects Challenge, but there was plenty to be excited about for Amerks and Sabres fans alike.

A handful of players that could see ice time in Rochester this season made their presence known against the Devils and the Bruins, and that was certainly true of players such as Brett Murray, J-J Peterka, and Linus Weissbach.

Amerks fans are no stranger to the scoring capabilities of Murray – he racked up 20 points in 27 games last season in the Roc. Murray picked back up where he left off in Rochester last season, picking up goals in both contests on the weekend, including the game-winner in a 3-0 win against the Devils on Friday.

“I believe I could have had a few more,” Murray said about his performance on Friday. “I trained really hard in this offseason and I came in with the mindset that I wanted to be the best player out there.”

What was more electric to watch was the chemistry between Murray and potential Amerks linemate Peterka. Murray had the primary assist on two out of Peterka’s three goals scored at the Prospects Challenge, including a dynamic play by Peterka and Murray that forced a turnover at the Devils’ blue line that led to the second goal of said contest.

2-0, us after the second! #LetsGoBuffalo pic.twitter.com/9aClzUrEDa

However, Peterka is going to have something to say about the potential of being sent down to Rochester. Peterka has it all, and the Sabres’ second-round draft pick from the 2020 NHL Entry Draft is going to make a strong case to make the roster in Buffalo in the coming weeks. If he starts the season in Rochester, Amerks fans are going to want to secure their tickets fast – they may not be able to see him there for long.

Although he may not have found the back of the net, Wiessbach was dynamic on the power play and created opportunity after opportunity this weekend. Look for Wiessbach to make his Amerks debut this October.

While Jack Quinn may have been a touch underwhelming at the Prospects Challenge, playing in only one game due to maintenance, he remains one of the former Amerks that looks to make his way onto the Sabres’ opening night roster. The jury is still out on where he starts the season, but if you’re a bettor, I’d recommend putting your money on Rochester. He’s not a player I expect to play all season in the AHL, however – his time in Buffalo will come.

Finally, a hot-and-cold weekend for Matej Pekar was highlighted by his physical play on Saturday, as he made his presence known whenever possible, something that Amerks fans will appreciate this season.

It should come as no surprise that Oskari Laaksonen and Mattias Samuelsson impressed spectators at the Prospects Challenge. Both players solidified themselves as professionals in their rookie seasons in the AHL, and Samuelsson found himself playing in 12 games for Buffalo in 2021.

Both players, if healthy, will have to claw their way into the lineup in Buffalo this season, and they both stand a chance to make some noise at training camp in the next couple of weeks. Surely, they will be amongst the last cut if they are sent back to Rochester. If they are, the once inexperienced, underwhelming blue line of the Amerks may find itself with a pretty solid first pairing in Laaksonen and Samuelsson.

We’ll have to keep an eye on Samuelsson’s lower-body injury that he sustained in the match against New Jersey on Friday after blocking a shot. Appert did not mince words about his feelings on Samuelsson’s play on Friday:

“What a block. I’ve been fortunate to coach him for a long time and there’s a reason he wore the ‘C’ for us with the national team. That’s just another example. He’s a winner of a hockey player and a teammate.”

Perhaps there’s no better story out of the Prospect Challenge than that of Peter Tischke, who impressed quite a few this weekend. Not only did Tischke put it in the back of the net on Friday, but he played a physical, selfless game on Saturday, blocking shot after shot and even dropping the gloves.

Peter Tischke gets in a tussle and the crowd goes WILD.

We love to see it. pic.twitter.com/mRVy0zpOjr

When Tischke signed with the Amerks earlier this offseason, I saw him as a solid depth defenseman – his play in Buffalo this weekend has changed my perspective a touch. This is a player that has the potential to be integral in the redesigned blue line in Rochester, and Coach Appert sees it similarly.

“I think Peter, all week, has been a real leader.” You can feel his four years at Wisconsin, and the leadership that he has. You can feel that he’s had a year in the American Hockey League.” Appert continued, “I thought he was a calming presence. I thought he was physical, hard to play against, and he showed why he’s fighting to climb the ladder in pro hockey.”

If any player’s performance has stirred the pot in Buffalo, it was Ukko-Pekka Luukkonen. Luukkonen had 22 saves in a shutout performance on Friday, which has sparked conversations about his opportunity to take over the Sabres’ net as early as this year. If I’m the Sabres, I leave him in the Roc this season to develop and take my medicine with Craig Anderson and Aaron Dell.

However, I am not Buffalo and I would not be surprised if we see UPL make a jump up to the NHL early in the season, especially if Anderson or Dell find themselves on IR.

As Sabres training camp approaches, one thing is certain: a host of players featured in the Buffalo Prospects Challenge will be regulars on the ice for the Rochester Americans this season – something to look forward to as an Amerks fan. In some ways, the last week of work for these prospects has served as a mini training camp for those who look to play in the Roc this season.

If you’re looking to name an MVP for the two games played in Buffalo this weekend, it’s hard to keep Murray off of your list, but many wouldn’t argue the honor being bestowed to Peterka or Luukkonen. On the flip side, fans will look for Quinn to rebound from a slow weekend marred by a slow start on Friday and a maintenance day on Saturday.

Get ready, Amerks fans – October is coming, and it is hard to not be excited about the improvements this team appears to have made this offseason.