WINNIPEG, MB – A night after tying the team record for career points, Sam Anas became king of the ice, scoring two goals and adding an assist as the Iowa Wild defeated the Manitoba Moose, 4-2. More importantly, it helped the Wild to move to 5-0-1 on the season, tied for the top record in the AHL. Anas’ three points gave him 135 for his Wild career, besting Zack Mitchell as the all-time leading scorer. Netminder Mat Robson made 24 saves to record his first professional victory.
Anas did not take long to set the record, scoring a power-play goal just 2:54 into the contest. The forecheck of the Wild generated a turnover in the Moose end. The puck came loose, and Anas quickly pounced on it, moving in on Manitoba goaltender Mikhail Berdin. Anas made a nice move, getting Berdin to start to slide to his right before putting the puck between his legs for his second goal of the season.
About 10 minutes later, Manitoba tied the score. JC Lipon gained control behind the net, firing a puck in front to Logan Shaw, who fired a quick shot through the pads of Robson for his third goal of the year.

The Manitoba crowd of nearly 8,000 was fired up, but the euphoria was short-lived. At 14:47 of the first, Anas put the Wild back on top for good. Kyle Bauman carried the puck into the Moose end on a 2-on-1 break. As he approached Berdin, he fed the puck to Anas, who fired the wrist shot off the crossbar and in for his second goal of the game.
The Wild clung to their one-goal lead for over 13 minutes of the second period, until Nico Sturm gave Iowa a little breathing room. At 13:28, Louie Belpido passed the puck to Anas, who made a quick, one-touch pass to Sturm near the right faceoff circle. The forward blasted the one-timer past the Manitoba goaltender for his second goal of the year to extend the Wild lead to two.
The Iowa Wild looked like they would carry that lead into the locker room, but a fluke goal with 32 seconds left in the second period pulled the Moose within one. Cameron Schilling attempted to blast a slapshot, but he only got a piece of the puck. However, Robson could not get his blocker on the knuckle-puck, as Manitoba made it a 3-2 game heading to the second intermission. 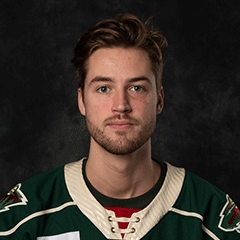 From there, the Iowa defense shutdown Manitoba. In the third, the Wild allowed the Moose just six shots and no power-play opportunities.
With a little less than a minute left, the Moose pulled Berdin looking for the equalizer. They recorded just one shot on net, but that proved to be more of a curse than a blessing. Brennan Mennell corralled the rebound, firing it to J.T. Brown, who fed the puck to Kyle Rau. Rau added the empty-net goal with four seconds left, sealing the 4-2 victory.
Anas led the way with his three-point night. Mennell added two assists, and Kyle Rau had a goal and an assist. Robson was solid all night; recording 24 saves on 26 shots. His first professional victory moved him to 1-0-1.
The 5-0-1 record is the best start in Iowa Wild history. They have now recorded points in nine straight games leading back to last year. The Wild will look to continue their quick start on October 25, when they travel to Tucson to take on the Roadrunners.