Goaltender Michael Garteig recently finished up the most successful season of his career with a strong showing as the starter for the expansion Newfoundland Growlers, leading them to their first Kelly Cup Championship. The Sin Bin’s Sarah Hobday recently spoke with Michael about his hockey career — from juniors in British Columbia, being signed by the Canucks, earning playing time in Utica and Newfoundland, and now onto Finland in 2019-20.

Michael Garteig grew up in Prince George, BC — about 500 miles north of Vancouver — with a population of about 74,000. He played three seasons in the British Columbia Hockey League (BCHL). The BCHL is a Canadian Junior A league and is recognized as amateur hockey. So, unlike in Canadian Major Juniors, BCHL players remain eligible to participate in NCAA hockey. Michael played for the Powell River Kings for two seasons in the BCHL, then played the 2011-12 season with the Penticton Vees. That season in Penticton is etched in history, with the team winning 42 straight games in the regular season – a league and North American record. Garteig was named BCHL Top Goaltender (among other accolades) that season.
Michael backstopped Penticton to win the Doyle Cup as BCHL Champions. He then led the Vees to capture the RBC Cup as Canada’s National Junior A Champions.

“The BC cities I played in were all great. Penticton was like the NHL of the BCHL; we were treated like kings.”

When asked what his favorite memory of juniors was, it was no surprise when Garteig responded: 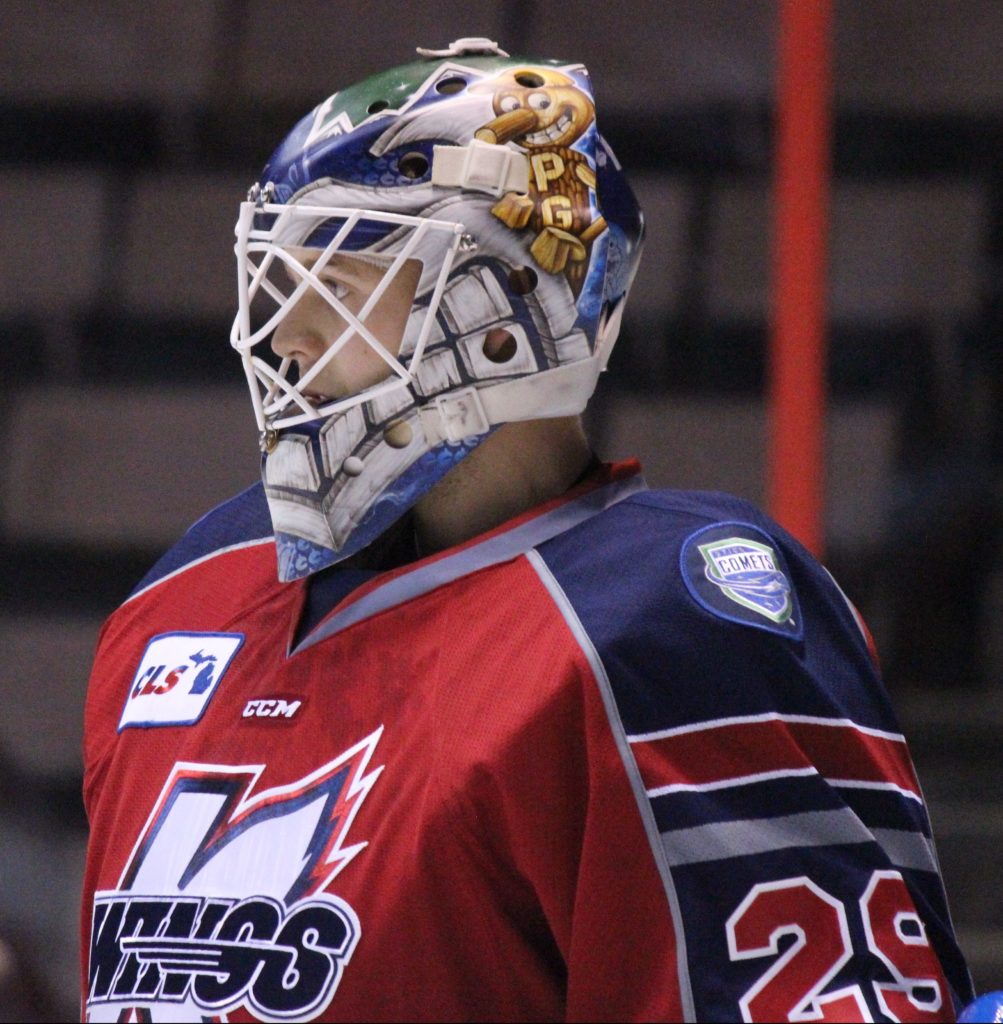 Garteig shows off his Prince George roots with unofficial town mascot “Mr. PG” as a prominent figure on his masks. Photo taken on Oct. 14, 2017 in Cincinnati by Sarah Hobday / The Sin Bin

Following up his time in the BCHL, Michael moved to Connecticut to begin classes for his first of four years at Quinnipiac University. By playing in the BCHL, Garteig kept his eligibility for NCAA hockey. While at Quinnipiac, the team went to the NCAA Frozen Four in 2013 and 2016. In his senior year (2015-16), he led the Bobcats to an ECAC Championship over Harvard. Michael was also named the goalie of the ECAC All-Tournament Team. Quinnipiac won their semifinal game over Boston College in the 2016 Frozen Four, but fell to North Dakota in the final.

“Some of my favorite hockey memories at Qunnipiac were winning the ECAC championship and being in two NCAA Frozen Fours,” said Garteig. “School was the best experience with education, friends, hockey, and the relationships built.”

IN THE CANUCKS SYSTEM / AN NHL SURPRISE

After a strong final season in Quinnipiac, Michael signed his first NHL contract: a one-year deal with the Vancouver Canucks in April 2016. He named signing that deal as one of his favorite moments of his professional career. In September 2016, Garteig returned to Penticton. But this time, he would be in a Canucks jersey, dressed alongside other prospects in the Young Stars tournament. In the semifinal of the 2016 Frozen Four, Michael faced off against Boston College goalie Thatcher Demko. Now, Garteig and Demko were in the same locker room, wearing the same jersey.
Following Young Stars and training camp, Michael was assigned to the ECHL’s Alaska Aces. On November 17, 2016, he got an unexpected call — Garteig headed straight to the Canucks to be the backup goalie in their game that night against Arizona. With the Canucks’ AHL affiliate in Utica, NY, there was no time to get a goalie from Utica to Vancouver in time for the game.

“It was cool. I’m from BC, so a lot of emotions. I had the best front row seat for an NHL game. That morning, I texted my brother that lives in Vancouver to ask if he wanted tickets to the Canucks game that night. He said he already had tickets, so I offered him better seats. I then told him I would be backing up. I flew into Vancouver that morning and stayed for a few days before rejoining Alaska. I had family (brother and cousin that live in Vancouver) and friends at the game. The Canucks won that night in the shootout.”

Asked if he had any thoughts going into that season that he might have the chance to go to Vancouver as a backup due to being so much closer than Utica, Michael responded:

“I didn’t even think of the slightest possibility of a Canucks call-up. Though, this did show the inconvenience of having their AHL affiliate so far from Vancouver.”

Garteig signed an AHL contract with the Utica Comets in the summer of 2017 for another year in the Canucks organization. Michael split the season between Utica and the ECHL Kalamazoo Wings.

During a call-up with AHL Utica, Garteig was all smiles as he backed up former ECAC foe Thatcher Demko in net for Utica. Photo taken on Dec. 2, 2017 in Bridgeport by Sarah Hobday / The Sin Bin

In September 2018, Michael signed a contract with the expansion Newfoundland Growlers. After a strong start to the season, the Toronto Marlies signed him to an AHL contract in December. I asked him if coming into the season if he had any inclination that this expansion team would make the playoffs, let alone win the Cup.

“In September, with only five guys signed…it didn’t look great. Then, we got a lot of help from the Marlies and Leafs. Getting so many guys on higher contracts playing in St. John’s was beneficial. We had an exceptional team. Around Christmas, with the coaching change and guys going up and down with the Marlies, we were still finding ways to win games. I knew then that it was something good here and that we could ride it out.”

In late spring 2019, Garteig got his first taste of ECHL playoff hockey with the Growlers. Playing in 68 games total between the regular season and postseason, the extended schedule was surprisingly easy on his body.

“I felt better this year with playing more games than I had in the past with playing less. It helped me get in a rhythm. With playoffs, I was getting every game. You ignore the little aches and pains until after playoffs.”

Garteig had an impressive showing in the 2019 playoffs, posting a 16-6-1 record with a 2.19 GAA and .928 save percentage. He also earned three shutouts, all against the 2018 Eastern Conference Champion Florida Everblades. Photo taken on May 31, 2019 in Toledo by Sarah Hobday / The Sin Bin.

Was his playoff run this year comparable to Quinnipiac in 2016, even with the different format and amount of games?

“In the NCAA, it is do or die with the playoffs, with mostly one game and you’re out. So, very different than the ECHL playoffs with best-of-seven game series. With the NCAA, you are so focused and dialed in, as one mistake can mean the game. With the ECHL, it is such a grind, but so much fun. You can have a bad game and can then make up for it the next night.”

Where did an ECHL championship rank for Garteig? And way out in the eastern outpost of St. John’s, Newfoundland, Canada?

“Winning the Kelly Cup was the highest of highs accomplishment. St. John’s was incomparable. It’s an awesome city. The city treated us great. I have no bad thing to say about St. John’s – except the weather, but even the locals say that. We were so loved and it was a unique place.” 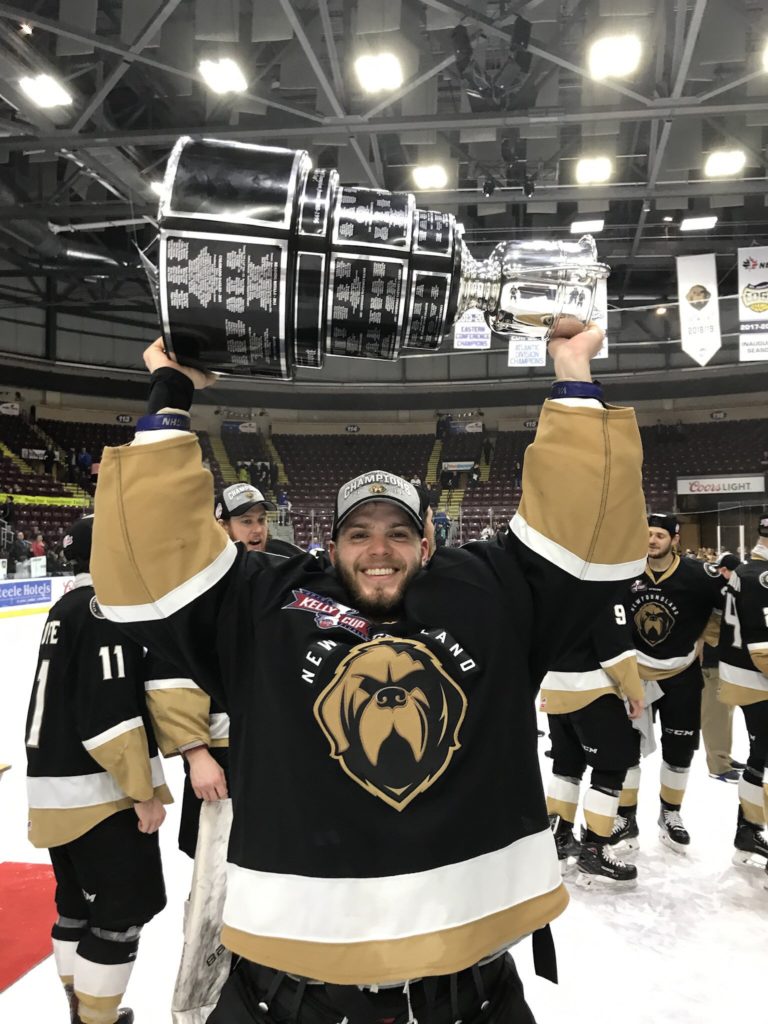 Garteig was undoubtedly a crucial piece in bringing the province of Newfoundland and Labrador their first ever professional sports title. Photo Credit: @MichaelGarteig / Twitter

I likened Michael’s career since juniors to being a hippie of the hockey world with all the places he has played. Since leaving BC, he has truly played coast-to-coast: from Connecticut for university, Alaska as a rookie, Kalamazoo in the central US, and most recently, Newfoundland. He didn’t mind my use of the term hippie here, but did Garteig ever have the desire to visit places like the northeast US or Newfoundland while growing up in Prince George?

“Being from a small town in BC, you don’t usually go any further. I liked New England with college. That was my first time really in the US when I went there. Coming into this season, my only option really was with Newfoundland. Turned out Newfoundland was my best experience and the most fun I’ve had in a long time.”

In keeping with the vagabond topic, Garteig also talked about the travel differences over his three seasons in the ECHL. 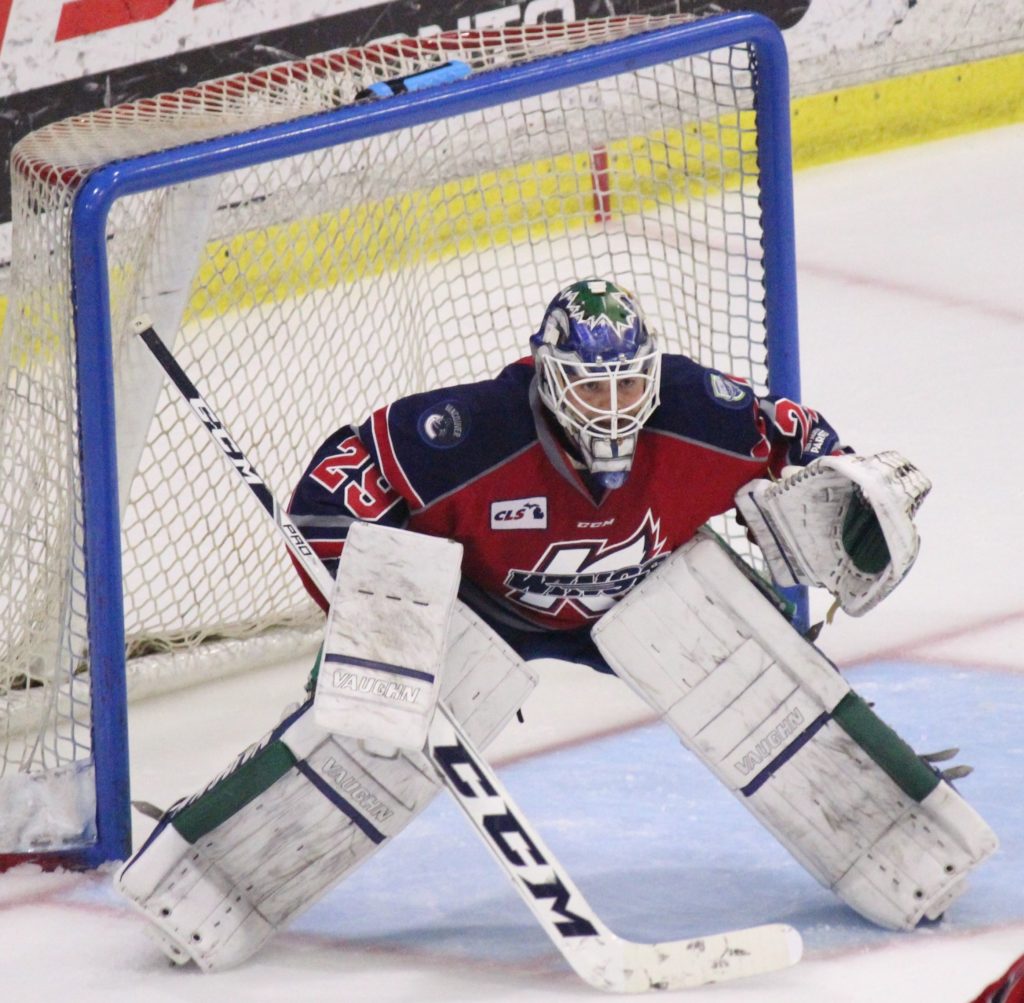 During his time with the Kalamazoo Wings, Garteig was not a fan of all the bus travel throughout the Central Division and beyond. Photo taken on Oct. 22, 2017 in Brampton by Sarah Hobday / The Sin Bin.

I told Michael that I thought he might be one of the few players that has played in probably every ECHL city over his three years in the league. He has…almost.

“I never played in Utah. The one time Alaska played there I was called up to Utica. But, I’ve played in all the other cities.”

As a goalie, playing against every division in the ECHL, did Garteig ever notice any discernible attributes amongst each region?

Two weeks after winning the Kelly Cup, Michael signed a contract with Tappara in the Liiga league in Finland. This will be only Garteig’s second time in Europe (in August 2013, his Quinnipiac team went to Italy and Switzerland). I asked about his decision to leave Newfoundland after winning the championship — if he just wanted a new/different challenge and the chance to see more of the world. Michael relayed that if he remained in Newfoundland, he would have served as a mentor for a young Leafs goalie prospect coming in, and that he would not necessarily be the starter.

“My stock is at the highest it’s been in my career. I am going to a top team in the [Liiga] league. It is a no-brainer in my career to make this move; this will be the highest level of hockey I will have played. I am excited, but nervous. Excited to explore a new culture and for this unique opportunity.”

Will Michael’s winning touch extend to Finland this coming season? Only time will tell.