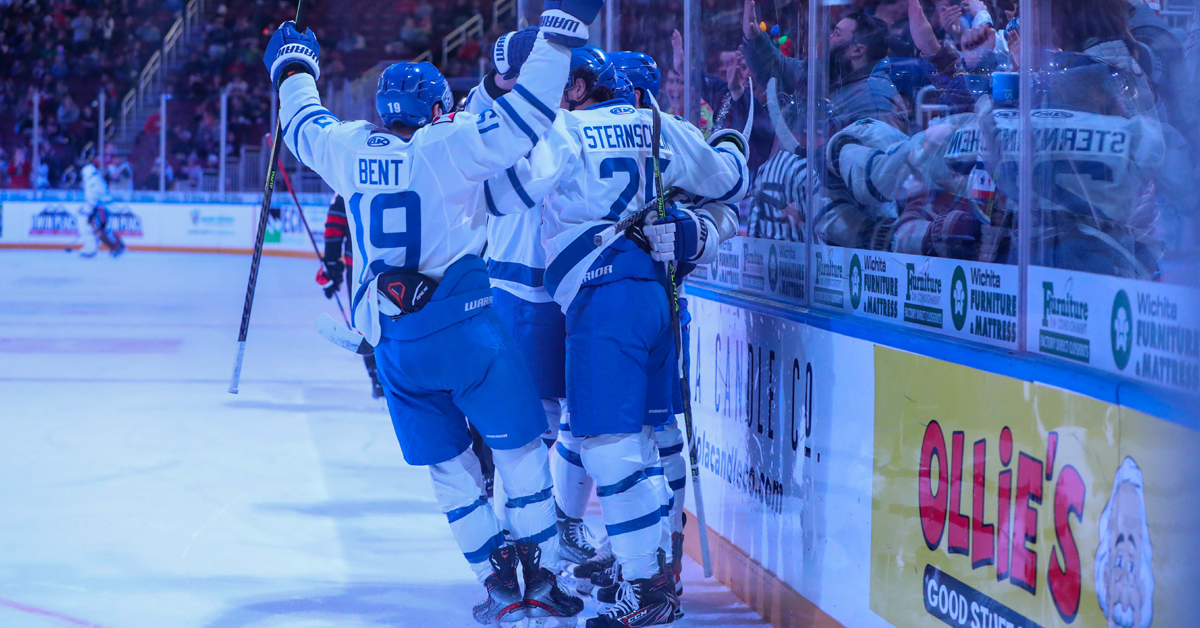 Are the Wichita Thunder a Kelly Cup Playoff Team?

Three straight winning months have Wichita Thunder fans eagerly watching the standings, but what do the Thunder still need to ensure the coveted “X” is beside their name at the end of the season? We break it down.

Are the Wichita Thunder a Kelly Cup Playoff Team?

WICHITA, Kan. – Welcome to the part of the hockey season where fan bases start looking at the standings and have visions of watching playoff hockey in just a few short months.

There is no doubt that Wichita Thunder fans are doing just that, given the team is coming off their third straight winning month, including a 10-4-0-0 mark in December, their first ten or more win month in the ECHL era. As the month of January kicks off, the analytics give Wichita a 92.8 percent chance of making the Kelly Cup Playoffs in April.

The Thunder have a true litmus test beginning Wednesday night as the league-leading Idaho Steelheads come to town to kick off their season series.

What do the Thunder still need to ensure the coveted “X” is beside their name at the end of the season? We’ll break down each position to find out.

There is absolutely no doubt the line of Brayden Watts/Quinn Preston/Michal Stinil is driving the bus offensively for Wichita. When you break down the month of December, the trio combined for 59 points (26G, 35A), led by Stinil’s 25-point effort in just 12 games played. The 26 goals scored by the line comprised 47.3 percent of the team’s lamplighters for the month (55.)

The next closest forward in points is the resurgent Jay Dickman, who notched 13 points (5G, 8A) in December, including goals in his last five contests.

From there, the drop is precipitous. Timur Ibragimov (4G, 4A) and Jake Wahlin (3G, 5A) were the next highest point producers in the month of December, with eight points each.

At some point, the “kid line” (Watts/Preston/Stinil) will start to cool down, and the offense will need to come from other sources. Finding the right combinations down the lineup will be key for head coach Bruce Ramsay & assistant coach John Gurskis.

“Bend, but don’t break” has been the motto for Thunder defenses throughout the Ramsay era. While the Thunder allow a ton of shots (an average of 36.03/game, good for third-most in the ECHL), they also block a significant number of chances as well. Through the first two-and-a-half months of the season, the Thunder are ranked seventh in goals allowed, with an average of 2.87 per game, so at least for now, the volume of shots allowed hasn’t been negative yet.

The defense, as constructed, is a balance of playmaking ability and physicality. Every blueliner for Wichita is over six feet tall, something that only Idaho can boast. The other huge asset for the Thunder right now is they have eight defensemen on the active roster, which has gone a long way to keeping the blueline group fresh for most of the season.

Cole MacDonald has been a brilliant pickup for the club, evolving into a shutdown pair with team captain Dylan MacPherson. Offensively, he filled in admirably on the top power-play unit while Billy Constantinou was in San Jose. In fact, 13 of his 20 points have come on the power play (3G, 10A) this season.

After picking up just three wins in his first ten starts, “ol’ reliable,” Evan Buitenhuis, is back to his winning ways. In the month of December, he went 8-2-0-0 with a 2.40 goals against average, a .930 save percentage, and a shutout. The netminders who have been assigned to Wichita from the Sharks organization, Zachary Emond and Strauss Mann, have been rock solid, though it is a little head-scratching why the Barracuda are rolling with three netminders up there.

Another bright spot for the Thunder has come on special teams, particularly the power play. Wichita enters the month of January with the league’s fourth-best power play, operating at just over 24 percent efficiency (35 of 146 overall). On home ice, the Thunder power play operates at a 30 percent clip, scoring 20 goals on the man advantage.

The penalty kill has been solid, too, with the Thunder in the top half of that category. Overall, they have allowed 23 power-play goals on 125 times short-handed, good for a kill rate of 81.6 percent.

The downside is Wichita has allowed seven shorthanded goals, the most in the league, all of those coming on the road.

What Do The Thunder Need to Be a Playoff Team?

What Could Derail the Playoff Chances?

Despite the push up the standings last February, the Thunder’s playoff hopes were spoiled a season ago with a 14-game winless skid from December into January due in large part to injuries and callups. Both are inevitable when you play a 72-game season, but this year’s team appears to be deep enough to weather that storm.

What would likely take the playoff train off the tracks this season is a sustained cold spell offensively or an injury to Buitenhuis that keeps him out for a period of time.