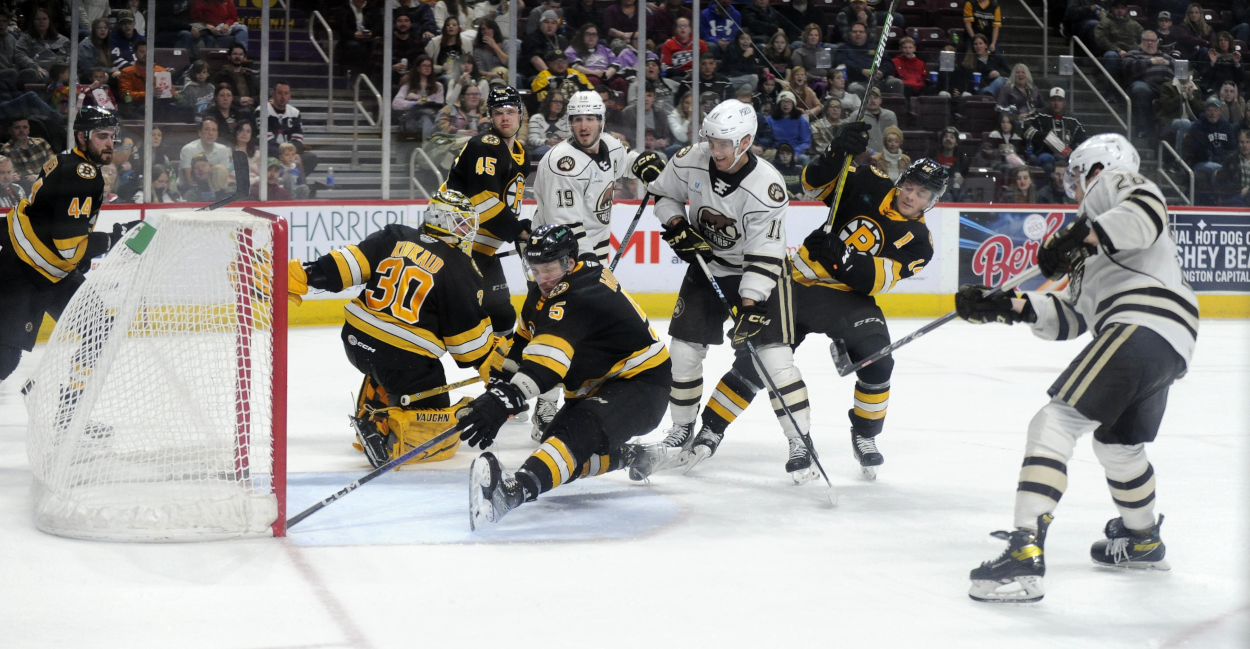 Atlantic Division Competition Heating Up in 2023

#AHL | The new year is upon us, and it’s time for some resolutions! @FPHBears suggests a few for eight AHL clubs as he walks us through the Atlantic Division and how those teams are shaping up for 2023.

There's no shortage of good hockey and drama in the Atlantic Division. Photo courtesy of Carl Minieri.

Atlantic Division Competition Heating Up in 2023

HERSHEY, Pa. – The New Year is upon us, and as 2023 kicks off, most teams in the Atlantic Division likely share the same resolution: to earn wins and move up the standings board. The division is remarkably wide-open as play kicks off in 2023, with a logjam of teams looking to assert themselves for playoff positioning. The difference in points from third place to eighth is a difference of only seven games, and with plenty of head-to-head matchups around the division still to come, the standings are far from set when the postseason comes around.

At the top of the division are the Hershey Bears, who carry a 22-7-2-1 record, good for 47 points, and enjoy the furthest separation from the other teams in the division at this point of the campaign. It’s hard to find much to complain about for the Bears other than their most recent loss reducing the gap to second place to just four points. Hershey took a split against the Providence Bruins in a pair of games at Giant Center, which is far from the end of the world. The aspect that should scare the rest of the division as well as the American Hockey League in general is that the Bears have accomplished all that they have with a lengthy list of injuries and illnesses as well as recalls. With players like Garrett Pilon, Bobby Nardella, Henry Rybinski, and Sam Anas on the shelf with injuries, alongside Henrik Borgstrom, Lucas Johansen, and Julian Napravnik out ill, and with their National Hockey League affiliate in Washington potentially getting healthy, Hershey could be set for major reinforcements very soon. Hershey’s resolution is to spend more time in the gym and continue living their best life.

In second place, the Providence Bruins have to hope that their recent success becomes a trend in 2023. The Bruins struggled a bit in the back half of December, seeing their stock fall to second place after spending most of the season in first. The Bruins have gotten solid contributions from their goaltenders as well as some of the best scorers in the division like Vinni Lettieri, rookie Luke Toporowski, Oskar Steen, and defender Connor Carrick. Those players should be more than enough to power the Bruins in their pursuit of retaking the lead, which took a step in the right direction with wins over the Bears and the Wilkes-Barre/Scranton Penguins to reduce the once large gap in the standings and continuing that strong recent trend will be key in 2023. Providence might’ve slipped a bit in December, but they truly don’t require a resolution other than to keep doing what they’re doing.

Just how they drew it up! pic.twitter.com/yHcdKYph1J

The gap really jumps a bit to third place, where the Charlotte Checkers have their recent story told in their four-game winning streak that’s lifted them to 35 points and starts the logjam of teams. The other half to Charlotte’s recent stretch is their last ten games, which is completely even at 5-5-0-0, as a tale of two halves to December. Their recent success is a testament to the resolve of their group, as the Checkers have been without their three leading scorers in Zac Dalpe, Riley Nash, and Chris Tierney. Their goaltending has been good, but their resolution for 2023 is to hopefully see some of those top players return to help the Checkers assert themselves and prove they can be consistent. The story in Charlotte is to simply make a resolution and stick with it in the new year.

If there’s any team in the Atlantic that has a resolution to hit the gym, start running, and improve their posture among their foes, it’s the Bridgeport Islanders. Once a team with aspirations of the top of the mountain, the Islanders have sunk to fourth place at 34 points, largely because of a seven-game losing streak and just one win in their last ten games. While most of the team’s losses have been very close games, several by a margin of just one goal, and the team has had fantastic contributions from the likes of Chris Terry, Andy Andreoff, and defender Samuel Bolduc, the Islanders have to clean up the defensive side of their game as they have allowed the most goals against at 107 in addition to the most goals for at 108. There’s a lot of potential with this Islanders group, but their opponents have found a way to outscore them too often lately.

Another big sequence from the rookie netminder! pic.twitter.com/iqIxZ5xbiI

Hot on their heels with a resolution to eat healthier and get leaner, it’s the Wilkes-Barre/Scranton Penguins. Although the Penguins have by no means been bad this season, their incredible goaltending tandem of Dustin Tokarski and Filip Lindberg have helped make up for lost personnel on recall to Pittsburgh. It hasn’t been enough to prevent Wilkes-Barre from being simply average, with a 4-4-1-1 mark in their last ten games and being on the wrong end of some close games in recent times to be sitting at 33 points. With a schedule consisting largely of teams in and around them in the standings, it makes for a resolution program that the Penguins will need to adapt to quickly in order to survive. A strong, 3-1 win on New Year’s Eve is a good start to making up lost ground.

One of the teams to get a jump start on their resolutions, the Springfield Thunderbirds, might be considered one of the most dangerous teams in the division right now. The T-Birds have started to get their game going in the right direction and have pushed out of the basement and into the sixth and final postseason slot, courtesy of a three-game winning streak, at 33 points. Matthew Highmore continues to pace the division as a whole as the only player to be among the league’s top twenty scorers alongside production from Hugh McGing, Martin Frk, Will Bitten, and Jake Neighbours. Neighbours has five points in his last three games, and alongside Joel Hofer’s strong play in goal, the Thunderbirds are hoping to parlay their success into a second half push up the leaderboard.

Elliot Desnoyers (8) cuts the deficit to one goal. pic.twitter.com/gFbVgph7Pv

The Lehigh Valley Phantoms are far from buried in the Atlantic, but sitting just above the .500 mark, their resolution has to be a large-scale life adjustment bigger than their division colleagues to succeed. The team has pieces, like veterans Artem Anisimov and Cal O’Reilly, who are chipping in, as well as rookie sensations like Elliot Desnoyers and Ronnie Attard, and with turbulence starting to die down from Philadelphia with the exception of goaltender Samuel Ersson’s recent recall, the Phantoms need to resolve to look within themselves and working into a playoff spot.

#ICYMI: Ryan Carpenter recorded a hat trick to help the @WolfPackAHL to a 7-3 victory last night in #HFDvsBRI. pic.twitter.com/N2Ir3xsBFv

The only team with a resolution of throwing a Hail Mary in the New Year is the Hartford Wolf Pack, who need to hit the gym, get their finances in order, and stop eating exclusively junk food. Five points out of a playoff berth at just 28 and with five points out of 12 in their last six games, the Wolf Pack have found ways to lose games and are out of a playoff spot for that reason. Both a strength and a weakness of the team is a diversified scoring portfolio, as there have been many players to contribute for the Pack but none have really taken the lead. Ryan Carpenter’s addition has been by far the most exciting with seven points over his last four games to jumpstart the offense, but it has balanced out the loss of Tim Gettinger since the end of November. They’re not out of the race, but it’s going to take a very hot second half as the Wolf Pack find themselves in the opposite situation of where they were a year ago.

Much like every person to make a New Year’s resolution has a different story, so too does each team in the Atlantic Division. The race is wide-open enough with plenty of battles coming up in the second half of the season to be appointment viewing, particularly down the stretch as division battles intensify and every point becomes more important. The contender for the Calder Cup could very well hail from the Atlantic Division, as each club continues to be tested and tried amongst some of the very best in the league.