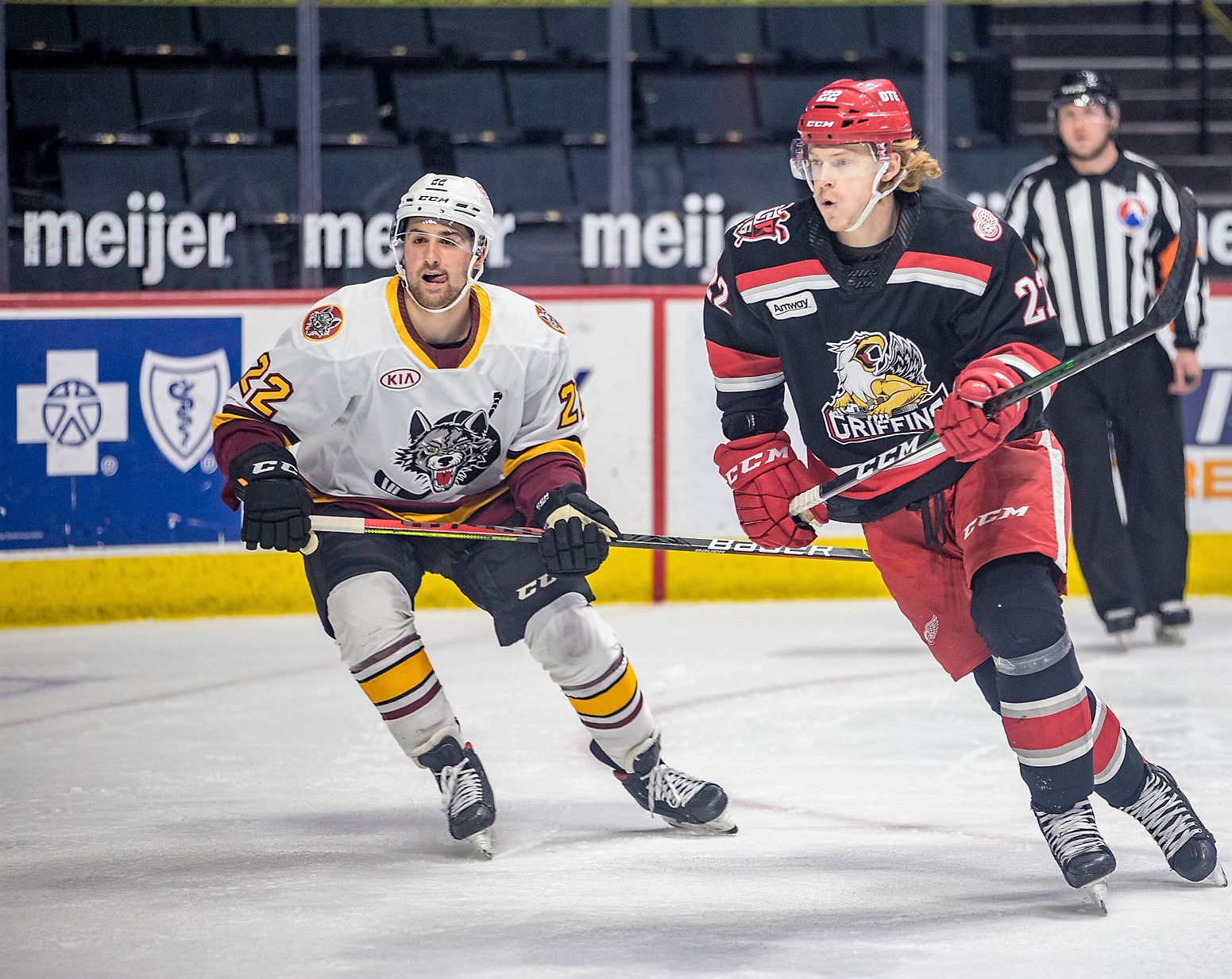 GRAND RAPIDS, Mich. – With just a little over a week left in the season, the Chicago Wolves found themselves in a familiar spot at the top of the Central Division. With their weekend series against Grand Rapids, they saw an opportunity to clinch their fourth division title in the last five years.

The Wolves had skated to wins in six of their last seven games against the division rival Griffins this season, and with two wins in the weekend, would take the top spot in the Central. The Wolves would be boosted by the return of center Ryan Suzuki, who had missed the last seven Wolves games.

Grand Rapids would establish early. However, the standings meant nothing once the puck dropped, and they wouldn’t be so easily left behind from the division race.

The Wolves have had a nasty trend of giving up the first goal within the first five minutes of gameplay. On Friday night, they were the ones striking early as Tommy Novak found a seam through the middle of the Griffins defense to spring Anthony Richard on the breakaway, beating Boyle through the five-hole just 3:18 into the game for a 1-0 Chicago lead. Richard has scored five goals in Chicago’s last six games.

Just over four minutes of tight-checking hockey later, and the Griffins created a turnover in the offensive zone, leading to a chance for Riley Barber in tight. While Warm stopped the initial shot, Barber got ahold of the second chance that squeaked through the Wolves goalie and into the net to tie the score at one.

With just over a minute left to play and with Barber sitting in the box, Phil Tomasino got the puck in his office at the right circle, and he wired a perfect shot past Boyle to give the Wolves a 2-1 lead into the first intermission. Tomasino’s 12th goal of the season paces the Wolves in goal scoring.

We're not even going to ask whether you're interested.

The second period was a story of minor penalties. With three going to the Griffins and two to the Wolves, both teams found it tough to gain momentum at even strength, and the penalty killers came up with key stops at both ends. For a moment, the Wolves looked poised to take control of this game with a 5 on 3 opportunities following minors to Patrick Curry and Taro Hirose. Still, the Griffins stood tall in their own end, and Joey Keane took a slashing penalty on a shorthanded rush by Grand Rapids, negating the Chicago advantage.

Just as the penalties expired, Jared McIssac fired a shot from the point that was redirected by Kyle Criscuolo in front of Warm and into the net for a momentum-swinging tying goal with just over two minutes to play in the period.

TV time out time, let's take a look back at the 2nd period Criscuolo tying goal! Assists from McIsaac and Barber! pic.twitter.com/ha6xdeAjNz

Riding high on Criscuolo’s late goal, the Griffins came out flying to start the third period, pinning Chicago in deep in their own zone and refusing to give up any easy exits for the Wolves. That pressure would yield to Griffins’ possession down low. With the defenders’ eyes trained below the goal line, it was an open Dylan McIlrath walking in and blasting a heavy one-timer to the back of the net and a 3-2 Griffins lead. With the ice continuing to tilt to the home team’s advantage, Hirose laid up a skyward pass into the Wolves zone that was controlled by Barber, who executed some great puck protection that backed the Wolves’ defenders up. That allowed the lane for Criscuolo to blast home his second of the night.

The Griffins, however, found themselves getting back into penalty trouble. Back-to-back minors for Troy Loggins and Joe Hicketts set up the Wolves with their second 5-on-3 opportunity of the game. Down by two goals, the Wolves would desperately need to convert on these. With excellent puck movement to find a seam, Dominik Bokk was left alone on the doorstep for a perfect pass from Novak to set him up for his ninth goal of the 2021 campaign, cutting the lead to 4-3

Just as Hicketts’ penalty expired, a shot from Marc Del Gaizo met the net-front presence of David Cotton, who tipped home his tenth goal of the year. This tally tied the game at 4 with less than five minutes to play.

At first, it appeared as though the Wolves would be able to claw their way into at least one point, with momentum on their side to take a stab at two in overtime, but Riley Barber had other plans. Taking the puck off the half wall, he walked in and fired the puck past Warm with just 12 seconds left on the clock for the 5-4 lead, which would stand up as the final score in this one.

12 seconds left? YOU BET. Barber gets the game winning goal! Assists from Criscuolo and Sebrango! pic.twitter.com/b17QzcerHU

Barber and Criscuolo would finish with two goals and two assists each. Tommy Novak took home the third star with three assists. Boyle finished with 20 saves on 24 shots, with Warm stopping 22 of 27.

The teams rematch back in Hoffman Estates on Saturday @ 7 pm CST, where the Wolves look to take a step closer to their Central Division title aspirations and a little payback for Friday’s heartbreak.