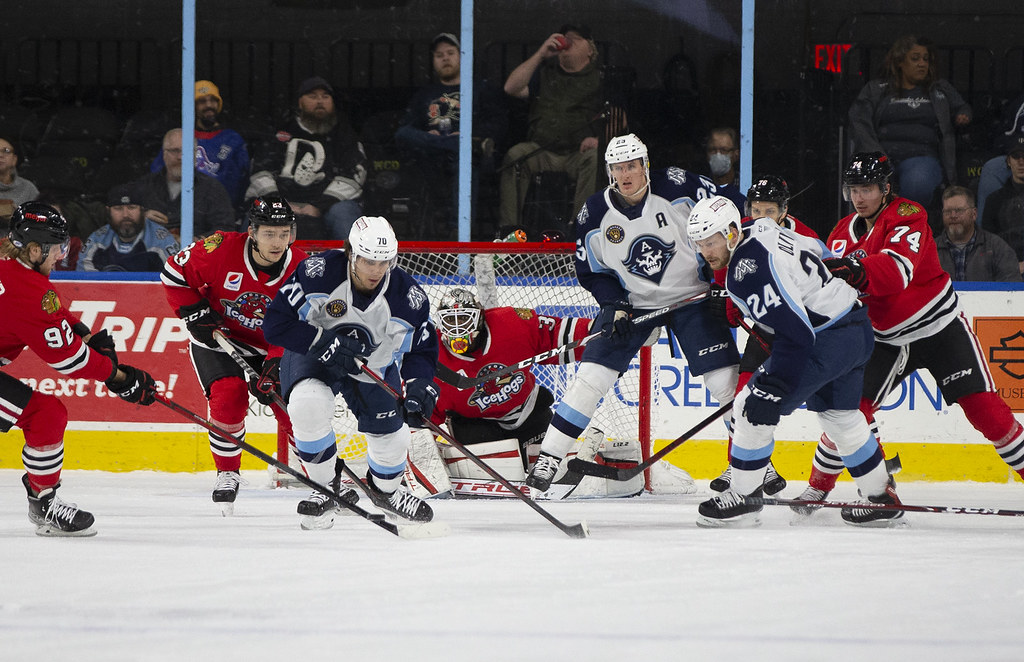 The IceHogs got solid goaltending from Malcom Subban and two goals from Evan Barratt in a big road win over Milwaukee. (Photo by Milwaukee Admirals)

MILWAUKEE, Wis.-The Rockford IceHogs opened a three-game road trip at UW-Milwaukee Panther Arena Wednesday night. With several key offensive pieces out of action heading into the game, the IceHogs needed someone to step up against the Milwaukee Admirals.

Rockford got a pair of goals from the second-year forward, resulting in a 3-1 triumph. The Hogs (7-7-1-1) picked up their second-straight victory against Milwaukee and outshot an opponent for the first time this season. The IceHogs finished with a 30-22 shot advantage and their first win in Milwaukee since April of 2019.

The IceHogs got on the board first, with a Barratt goal 3:16 into the contest. The play was set up with Cameron Morrison‘s puck retrieval behind the Milwaukee net. Morrison passed to Carson Gicewicz at the goal line, who fed Barratt (5 G, 4 A) in the slot. The shot was too hot for Admirals goalie Connor Ingram to handle, and Rockford led 1-0.

Milwaukee evened the score at 1-1 at 10:08 of the first period when Matt Donovan fired from the top of the right circle after taking a pass from Grant Mismash. The shot fluttered under the right pad of Hogs starter Malcolm Subban on its way to the net.

Rockford struck again late in the first. Issak Phillips hauled in the puck in his own zone and went coast to coast, sending a shot off Ingram from the right circle. The rebound bounced to the right post, where the Hogs defenseman collected the puck and guided it into the net. This gave Rockford a 2-1 lead at the 18:32 mark. Morrison and D.J. Busdeker picked up the assists on the goal.

The Hogs had ample opportunity to build on their advantage in the second period. However, Rockford failed to get a puck past Ingram despite six minutes of power-play time. The Admirals netminder stopped 14 IceHogs shots in the middle frame.

In the third period, Milwaukee put pressure on Subban, sending ten shots on goal in the first half of the final frame. Rockford needed to shift the momentum. They did so on the power play.

Marc Del Gaizo was guilty of hooking, setting up the Hogs for a man advantage. Barratt picked up his second tally of the evening by sticking in a rebound of a Jakub Galvas shot for a 3-1 lead 12:58 into the third period. Dylan McLaughlin picked up the secondary assist, pushing his point streak to six games. Rockford then held the Admirals without a shot for the final seven minutes.

Subban stopped 21 shots to pick up his second win of the season. Barratt (First), Morrison (Second), and Subban (Third) were the three stars of the game. The IceHogs now travel to Grand Rapids for two games with the Griffins Friday and Saturday.