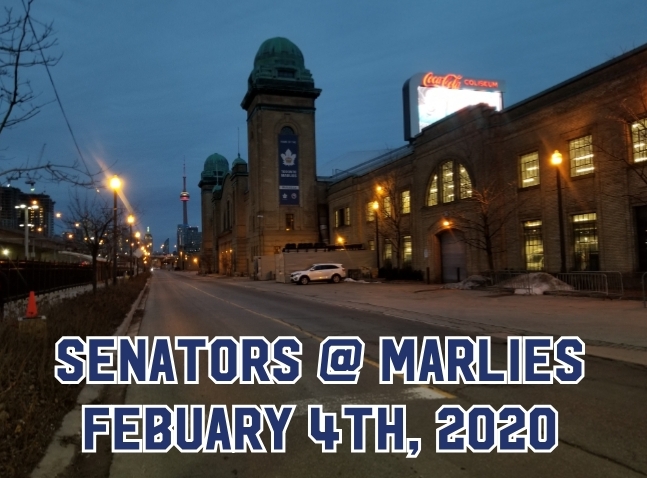 Battle of Ontario Proves Too Much for Marlies

TORONTO – Let’s be real; the Belleville Senators have been red hot as of late.

Battle of Ontario Proves Too Much for Marlies

TORONTO – Let’s be real…the Belleville Senators have been red hot as of late. The Baby Sens are 8-1-1 in their last 10 games and 19-4-2 on the road, putting them first in their division. Toronto on the other hand, not so much. The Marlies are 2-6-2 in their previous 10 games, but are yet to lose an evening game at home.
After news broke Tuesday morning that Toronto Maple Leafs goaltender Frederik Andersen wouldn’t travel to New York due to a neck injury, the Maple Leafs recalled Kasimir Kaskisuo to backup Michael Hutchinson. The domino effect resulted in Parker Gahagen being called up from the Newfoundland Growlers by the Marlies.
One of the big storylines heading into this game was the missing Jeremy Bracco, who is fifth in the AHL in assists. According to Marlies Head Coach Greg Moore, there was a simple reason for his absence.

“He’s away for personal reasons, there’s no timeline for his return,” Moore said.

With a monkey wrench thrown into the Marlies’ game plan, they turned to Joseph Woll to start Tuesday’s game against Belleville. Woll was pulled in Saturday’s game against Charlotte after giving up two goals in the first period.

Joey Daccord found himself far out in no man’s land early in the first period. Deep outside the blue paint, a streaking Egor Korshkov made a stunning move to deke out Daccord and buried the puck on the open net.

The Senators were quick to respond. Just a few minutes later, Logan Brown made a down-low pass to Vitaly Abramov, who, from the goal line, found Rudolfs Balcers in the slot to tie the game.
The battle of Ontario was present throughout. Belleville brought the physicality, and Toronto gave it back. Brown found himself doing the walk of shame in the opening stages of the second period. Delivering a cross-check from behind, the back full of lumber gave the Marlies a five-minute power play.

Among the long line to the penalty box, the Senators scored a short-handed goal. Jordan Szwarz put his name on the scoresheet, with a wrister from the circles to give Belleville the lead. Jack Dougherty also got an assist on the goal.
With 23 seconds left in the period, Belleville would score the insurance goal. The Senators were able to get once again set up near the slot area to send out a cross-ice pass to the center. Balcers scored his second of the night and his 30th point of the season with the goal.
With 40 minutes down, it was clear this was an intense battle. The first two periods were physical, fast, and challenged both goalies. Toronto dominated the shots for most of the period, but, had a power-play for a chunk of it. Though it was back-and-fourth, Belleville had the advantage. Toronto had their chance with nine minutes of power-play time but failed to convert.
And as much as I wanted to believe the Marlies had their form like Coach Greg Moore told me on Friday, I felt as though Toronto was missing something. The Marlies failed to buzz when they needed to. At times, there was more of a buzz from 23 Brazilain fans behind the net than the 23 Marlies on the ice. Toronto conformed to Belleville’s physical game last night and forgot to focus on their own.

Moore told me a couple of weeks ago that every team that’s losing has the natural reaction to try harder near the end of the game. I didn’t see that from the Marlies. They pulled their goalie down by one in the late stages of the third, but couldn’t find the back of the net.
After the game, Moore, who looked defeated, gave short and concise answers:

“Five on five, I think we played really well today…special teams let us down tonight.”

When asked about being out of the playoffs, Moore hesitated, and told the media that he would stick to his plan, and to refer back to the teaching points of the last four games:

“That’s focusing on results, which is important…”

Both teams will square off again on Friday in Belleville at 7:00pm EST. The game will be live on AHL TV.