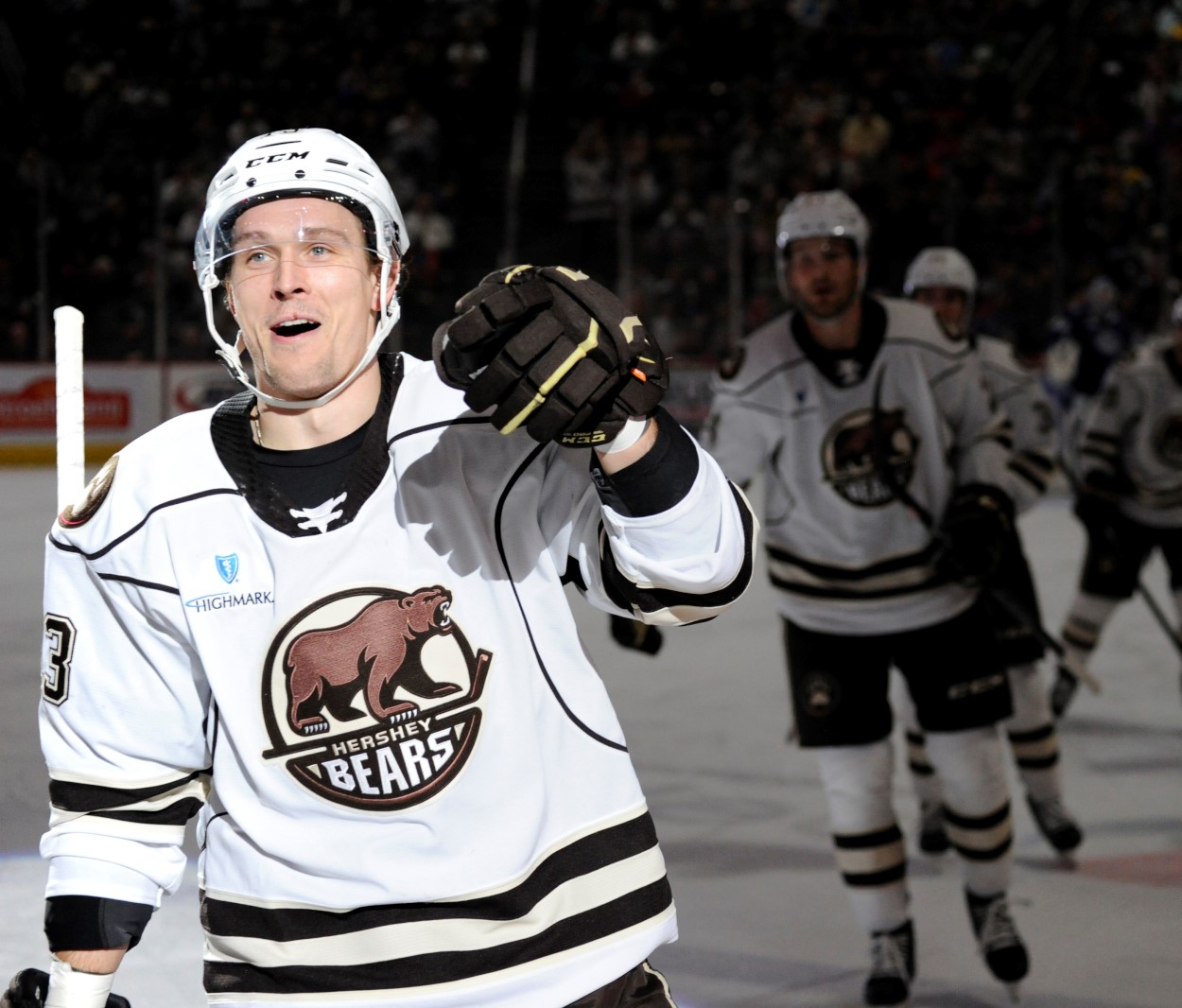 #AHL | As players return to full health, @TheHersheyBears have had to play some roster and lineup Tetris. @FPHBears takes a look:

Beck Malenstyn is among several familiar faces to suit up once more for the Hershey Bears. Photo courtesy: Carl Minieri/ Field Pass Hockey

HERSHEY, Pa. – There’s a balancing act that teams in the American Hockey League have to go through each season to develop players for their National Hockey League affiliates while maintaining their quest for the Calder Cup. Between injuries and call-ups, it’s a challenge to achieve, and building depth is a process that begins months before puck drop in the dog days of summer. For the Hershey Bears and their affiliate, the Washington Capitals, a strange summer with a lot of question marks has suddenly played out into a best-case scenario for the organization as a whole right now as the calendar year 2023 gets underway.

Over the summer, the biggest stars of the Capitals’ lineup were set to miss significant time to injury. Forward and brief former Bear Tom Wilson had to have surgery that would hold him out until December at the earliest. Top playmaker Nick Backstrom had hip resurfacing surgery, a procedure that no player has successfully returned to professional hockey from long-term. The Capitals built depth and signed players as best as they could over the summer, but the 2022-23 season started as a rerun of the year prior as top players got hurt with alarming frequency. Despite some creative additions from waivers and free agents, they had to dip into Hershey’s active roster. That meant no Connor McMichael or Aliaksei Protas for the Bears, in addition to losses of Axel Jonsson-Fjallby and Brett Leason on waivers for opening night. Beck Malenstyn was promptly recalled after just two games in Hershey. More players went down, but head coach Todd Nelson’s structure has kept the team going no matter what personnel they had. The Bears eventually got McMichael back in November, and each addition has been essential to the lineup as the Bears rang in the new year.

It got to a point at the end of the calendar year where the Bears called up players from their ECHL affiliate to play a major role in the Sweetest Place on Earth. Kevin O’Neil’s first AHL goal was memorable as he slotted in on the second line and the second power-play unit. Malenstyn returned to the lineup to narrowly give Hershey 12 healthy forwards to dress at the time. The Bears had a weeklong break, and the stars aligned to fill the lineup with last season’s top scorer Garrett Pilon and offensive defenseman Bobby Nardella, returning after a lengthy absence. Henry Rybinski and Henrik Borgstrom returned simultaneously, and the Caps got Wilson and Backstrom back on the same day. That meant roster moves to clear space and Protas dressed in a Hershey uniform for the first time all year. There are even more reinforcements on the way, as Hershey’s top scorer from a year ago, Joe Snively, cleared waivers on Sunday, while defender Lucas Johansen is on the brink of returning. It creates a balancing act for Nelson, who suddenly has a lot of healthy bodies that can’t play simply due to volume.

Excellent no-look pass by Aliaksei Protas for his second assist of the game on Mike Vecchione’s 13th of the season! #SYRvsHER pic.twitter.com/gtDaZxb4Cn

“We have a lot of talent in that dressing room right now and unfortunately you can’t dress 25 players,” Nelson said of the full roster. “There’s a lot of good players who are sitting out right now, we’re going to try our best to make sure we utilize everybody who is here and once again develop that chemistry. We play a bit different than Washington does, so when a guy like [Protas] comes down we have to work with them to tweak some things and he gets it, he made a great play on the power play goal. We’ll touch on some things over the next couple days.”

Some of the players that found themselves out of the lineup this past weekend included Matt Strome and Kale Kessy, who have been regular players on the heart-and-soul checking line. The lineup changes even saw a strong two-way player like Shane Gersich become a victim of the sheer volume of players through no fault of his own. Impressive defenders Logan Day and Jake Massie seem to be on the outside looking in once Johansen returns to health. Forward Julian Napravnik recently returned as well but now finds himself on the sidelines. It should be noted that Hershey isn’t even completely clear of injuries, with scoring forward Sam Anas still on the shelf.

“It’s hard, it’s real hard,” Nelson said. “We’re a feeder team to the National Hockey League and we have to manage it the best way possible. You feel bad for the guys who got pulled out [of the lineup] who shouldn’t have gotten pulled out, it’s truly a numbers game. We were playing real, real well down the stretch here and I think we’re getting more help from Washington [Snively clearing waivers]. We’ve got a lot of bodies and we have to figure out how to manage it. It’s hard to keep everybody happy and we’ll have to manage it the best way possible. A lot of things could happen, we should have Johansen back on Tuesday too. I guess that’s my job to try and keep them happy.”

The sudden influx led to some struggles for the Bears on Saturday in the first game with such a beefed-up roster, as the players had to try and achieve some chemistry with three brand new lines of the team’s four. Suddenly, the combination of rest, time off, and unfamiliar lines led to some struggles and only one goal for the Chocolate and White in what turned out to be a loss to the tested Charlotte Checkers. From Nelson’s perspective, Sunday’s game was an improved effort, but he felt the team had areas to improve. The changes won’t stop, as Nelson mentioned in his postgame press conference on Sunday, as the team will insert Snively and, most likely, Johansen back into the lineup for Wednesday’s game against Wilkes-Barre. Although the Bears will gladly take a player like Snively, who had 38 points in 35 games last season, it just leads to more mixing and matching for Hershey’s bench boss.

However, once the team has time to gel, the Bears have the potential to be a step above most of their peers in the AHL. It’s all to the organization’s benefit as top prospects McMichael and Hendrix Lapierre have the opportunity to play with some extraordinary players with four lines that should be the envy of the Atlantic Division. Every team seems to go through highs and lows with its lineup, and sometimes when it rains, it pours. It’s an excellent chance to see some of Hershey’s offensive numbers climb a bit, including the power play, as that side of the team’s play hasn’t been as strong as the defensive side of their game. The Bears have the opportunity to utilize this lineup and build upon what has already been a tremendous season at Giant Center.