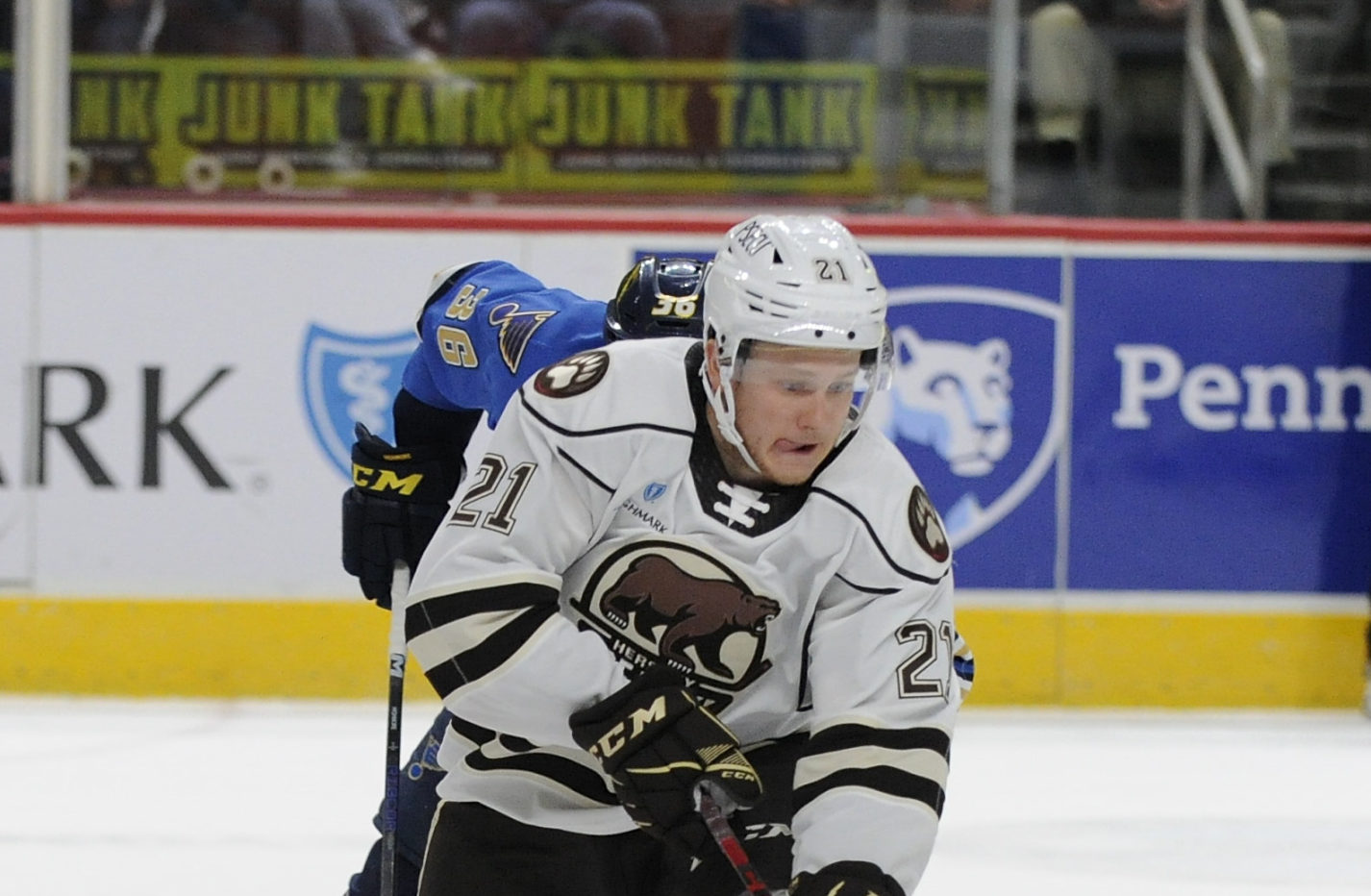 #AHL | On a night when Chris Bourque’s jersey was retired, @TheHersheyBears honored his legacy by overpowering the @AHLThunderbirds. Our @FPHBears was there for coverage

HERSHEY, Pa. – The Hershey Bears had a banner night on Saturday when they raised Chris Bourque’s number 17 to the rafters at Giant Center in the first jersey retirement ceremony for the American Hockey League’s most senior franchise in twenty years. After Bourque charged the current group of players to wear the Bears colors with pride, the team put on a worthy performance by scoring five unanswered goals to take a 6-2 decision over the visiting Springfield Thunderbirds, with five different players netting goals. Hunter Shepard earned the win with 21 stops, while Vadim Zherenko took the loss for the Thunderbirds with 32 stops.

The jersey retirement ceremony saw the Bourque family in attendance, including his brother and teammate in Hershey in Ryan Bourque as well as his father, legendary National Hockey League defender Ray Bourque. Chris is one of Hershey’s most decorated scorers in club history, as well as its all-time leading playoff scorer. The ceremony included a compilation of Bourque’s teammates from his tenure in Hershey, which included all-time greats like Alexandre Giroux, Keith Aucoin, and Andrew Gordon as well as more recent ones, including current NHL players like Nathan Walker, Liam O’Brien, and Travis Boyd. Fellow Bears legends Mitch Lamoureux and Tim Tookey chimed in on Bourque’s big night in a touching video tribute.

Teammates, coaches, and friends with some heartfelt messages to @cbourque17! pic.twitter.com/LJd7q8Rs8C

“The best years of my life were playing in Hershey,” Bourque said in the pregame ceremony. “To all my former teammates in attendance and all those who couldn’t be here: thank you. What makes Hershey so special is the fans. There were so many nights where the fans helped amp us up and give us that home-ice advantage. I’ll say: it’s nice to hear the cheers again because the last time I was here, you were booing me. The passion of Bears fans is second-to-none. As an opponent, wanting to play well in a special place like Hershey always gave me a little extra motivation. That said, to be back here as a Bear in front of the best fans in the AHL, that feels right. That’s the way it should be.”

"To be back here as a Bear in front of the best fans in the AHL…that feels right. That's the way it should be." 🤎 pic.twitter.com/PQonX3fbLH

Bourque’s number is just the fifth one to be retired by the organization, and he is only the eighth man to ever receive the honor as the team celebrates its 85th anniversary. It’s hard to say if there will ever be another player to have their jersey lifted to the rafters as the qualifications are steep and there are fewer and fewer players to have the sheer number of seasons under their belt to receive such an honor. It may take another twenty years or longer to have another man become worthy of such recognition from a franchise as historic as the Hershey Bears, which made the ceremony all the more special on Saturday night.

There was still a hockey game to be played after the ceremonies, which saw the Bears don number 17 jerseys inspired by the threads that Bourque raised the Calder Cup in during the 2009-10 season for warmups. Those jerseys would be auctioned off after the game with the help of Ray Bourque to a variety of charities chosen by Chris. The game started off on the right foot as Hendrix Lapierre scored on a rebound at the side of the goal for his tenth of the season on the power play but was quickly answered by Martin Frk as he buried a cannon slap shot to even the count at one. Springfield struck again and took a 2-1 lead into the first intermission as Brady Lyle fired a shot from the blue line that hit a body in front of Shepard to find twine.

The Bears found their legs in the second period and battled back, starting with a pretty goal from Connor McMichael. The first-round selection of the Washington Capitals in 2019 took advantage of some great work by Henrik Borgstrom keeping the puck in at the blue line, with McMichael dangling the puck through a defender and beating Zherenko high over the glove to even the score at two. Hershey scored the eventual game-winner later on in the period as Garrett Pilon scored his first goal since returning from a high ankle sprain that held him out for a few months, striking on the power play for a good night on the man advantage for the Bears. Borgstrom collected three assists on Hershey’s first three goals, which netted him first star honors in this one.

Hershey buried any hopes of a Springfield comeback in pretty short order in the third, getting goals separated by only 24 seconds as Ethen Frank deflected a shot from Jake Massie at the point for his 16th goal of the season. Frank’s hot streak continues as Hershey’s leading goal scorer has three goals in his last two games as well as six points over his last four contests as a major factor in the team’s success this season. The Bears quickly followed that goal up Joe Snively’s second goal of the season as he’d be set up by McMichael to fittingly extend his home ice point streak to 17 games on a night where that number was celebrated. Pilon would add an empty net goal to seal Hershey’s 25th win of the season.

Chris Bourque's #17 went to the rafters, and in front of a sold-out crowd, we earned a 6-2 win over Springfield to improve to 25-8-3-1. Here are the highlights from a historic night in Hershey. pic.twitter.com/b3WNGHqKZZ

“It’s great character. It’s a great tribute to the guys in the room,” Bears head coach Todd Nelson said about his team’s response to trailing after the first. “After the first intermission, we said ‘look, we got through that period, but we’re down one goal, now we’ve got our legs, and let’s take over for the next forty minutes.’ Springfield played us hard in the first period, real hard. I liked the way the guys responded.”

I like where our chemistry is at right now. I thought it might take longer, but I’m happy that the last couple nights we got moving in the right direction. It’s at a good time because we go on the road for six out of the next seven games or something like that, so it’s going to be busy.”

The win happened to be a milestone for Nelson, who celebrated his 500th professional win as a coach at the final buzzer of this one. Nelson was rewarded with the team’s honor internally by captain Dylan McIlrath and got to don the team’s bear head, as shared on the team’s Twitter page. It’s the latest in a long list of honors for the team this season that has only just passed the halfway point in this game.

“Obviously, it’s special, I didn’t even know to be quite honest until tonight when I looked at the game notes. That’s why we have guys like Jesse [Liebman] and [Zack] Fisch to take care of that stuff. It’s special. I’ve been very fortunate to work with some very good players and very good teams over the years. This team here is no different. A lot of the credit goes to the players.”

It’s a great note for the Bears to conclude their season-high seven straight games at home before they hit the road for some time, as Nelson mentioned. The two wins puts a positive spin on what was a bit of a dour note earlier in the week, as the Bears struggled in the middle portion of their time at home but conclude the set of games with three wins in their last four and seven of eight possible points in that span. The win comes on a day where the second place Providence Bruins lost in regulation to the Hartford Wolf Pack, meaning that the Bears extended their first-place lead to five points on this night. Hershey will play six of its next seven games on the road starting on Friday north of the border against the Laval Rocket.

For Springfield, this set of games was a measuring stick for the team after a hot stretch and getting beat on back-to-back points stings a bit. Despite the return of some top players like Matthew Peca, who tallied another pair of assists as he did a day ago, the Thunderbirds simply ran out of answers against a deeper Bears group on this night. The second period saw the Thunderbirds outshot by a 16-6 margin, and the two quick goals in the third period seemed to seal their fate quickly despite a very strong first period. Springfield has had a tendency to skip out on putting in a full sixty-minute effort this season at times and been able to come out on top, but it simply won’t work against top teams like Hershey. The losses helped drop the Thunderbirds to the bottom of the Atlantic Division, with the gap to as high as fifth place only separated by two points.

The Bears’ explosive outburst in this game leaves a lot for fans to be excited about. Pilon, McMichael, Lapierre, and Borgstrom all registered multi-point nights, and 11 different players factored in on the score sheet in this game. It’s the type of game that Chris Bourque was a part of many times over his career as a Hershey Bear and more often than not, he was a key reason why the Bears won on these kinds of nights. The Bears have not been to the Calder Cup Finals without Bourque leading the charge on the ice, but this group is doing its utmost to honor him and make the best push yet to change that and try to raise another banner at Giant Center.