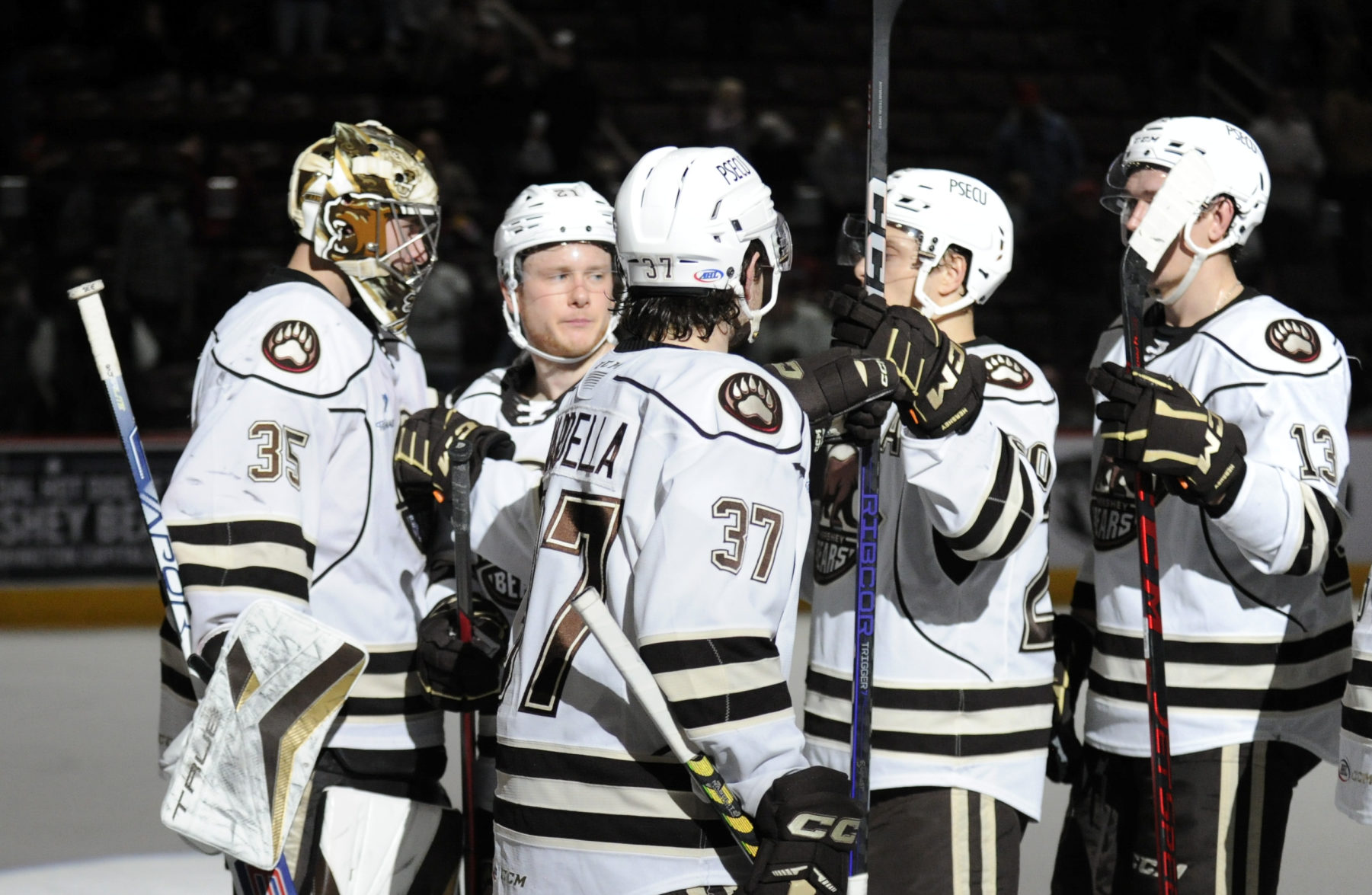 #AHL | Taking a challenge earlier in the week for head coach Todd Nelson to heart, @TheHersheyBears made an early lead stand up in a 5-3 win over @ThunderbirdsAHL. @FPHBears recaps what happened

HERSHEY, Pa. – The Hershey Bears and the Springfield Thunderbirds have only met up once in the 2022-23 season, but it would have appeared they were old rivals on Friday night at Giant Center as the two teams scrapped and clawed. In a big response to their head coach’s challenge after Wednesday’s loss, the Bears jumped out to a 3-0 lead and held back the visiting Thunderbirds in a 5-3 decision. Ethen Frank scored a pair of goals in the win, and Zach Fucale made 19 saves while Joel Hofer suffered the setback with 23 stops.

The Thunderbirds, sporting their stylish blue third jerseys on the road, got some good news ahead of puck drop as forward Matthew Peca skated in his first game of the season after tallying sixty points a year ago and sixteen during the 2022 Calder Cup Playoffs. His return was a massive boost for Springfield, who is in the midst of dealing with the recalls of several key players, and Peca chipped in two assists in his return to the lineup on Friday. However, it’d be a recently returned player for the Bears who lit the lamp first as Joe Snively scored his first American Hockey League goal of the season in just his second game and extended his point streak at home to sixteen games dating back to a year ago.

Hershey doubled their lead just over a minute later with Beck Malenstyn’s second goal of the year on a bit of a strange play. The puck bounced end-over-end, and Mason Morelli batted it ahead, where Malenstyn was able to get a piece of it out of midair and best Hofer. The Bears got another goal a minute and change later when Logan Day took a shot from the point that hit a defenseman and landed right onto Frank’s tape, and the All-Star forward who has been so crucial to Hershey’s success made no mistake in cleaning up the loose change. Hershey outshot Springfield by a margin of 18-4 in emphatic response to the challenge put forth earlier in the week.

In the second period, both teams traded chances but had far fewer shots on goal. The opportunity Springfield needed came late in the frame when Riley Sutter was assessed a match penalty for a check to the head of Greg Printz. Printz finished the game, but the resulting five-minute major penalty gave the Thunderbirds some life as Brady Lyle scored on a point shot to cut into the lead. It’d be the only goal that came of the major penalty going into the third period, but Frank’s 15th goal of the season on a slick drive to the net extended the Bears’ lead back to three.

Down but not out, the Thunderbirds cut the lead to two once again as Mathias Laferriere struck on the power play. Springfield took their share of penalties in the third, one of which they’d live to regret as a shorthanded bid turned into a three-on-one rush where Henrik Borgstrom buried a shot low through Hofer’s pads for his sixth of the campaign. Will Bitten would strike for his 11th goal late, but the Bears held off the Thunderbirds the rest of the way and closed out the game despite Frank missing out on a hat trick late due to an offsides call. Frank’s consolation prize wasn’t so bad as he’d be selected as the first star of the game.

“We had some private meetings yesterday with individuals, which are held throughout the year at different times,” Bears head coach Todd Nelson said after the game. “Certain individuals, we needed more from, and they agreed. I thought the chemistry was better with the lines tonight. Every line contributed. I liked the chemistry from the lines tonight, and it was a pretty solid game, pretty good job on the power play. I thought the guys played the right way for the most part.”

Nelson lauded the performance of players like Malenstyn and his linemates, who got in on the forecheck with some big hits early on to get energy on the ice. The goal is another great sign for him, his second goal in three games as he returns from an injury that sidelined him for the last two months. Hershey played a much more complete game, one that seems to be the advertised team that was bolstered by so many players returning to the lineup as all four lines chipped in on the score sheet. It’s a big two points for the Bears to keep pace with the Providence Bruins, who picked up a regulation win over the red-hot Utica Comets on Friday night.

The Bears and the Thunderbirds meet again on Saturday night, which is preceded by Hershey’s retirement of Chris Bourque’s number 17 in the leadup to the action. Bourque, a legendary forward who is one of the franchise’s all-time leaders in numerous categories, was on-hand on Friday to sign autographs and took in the game from the suite level. Bourque’s jersey retirement is the first in 20 years for the club as one of the highest honors bestowed by the organization as just seven other players have had their names lifted to the rafters of Giant Center.