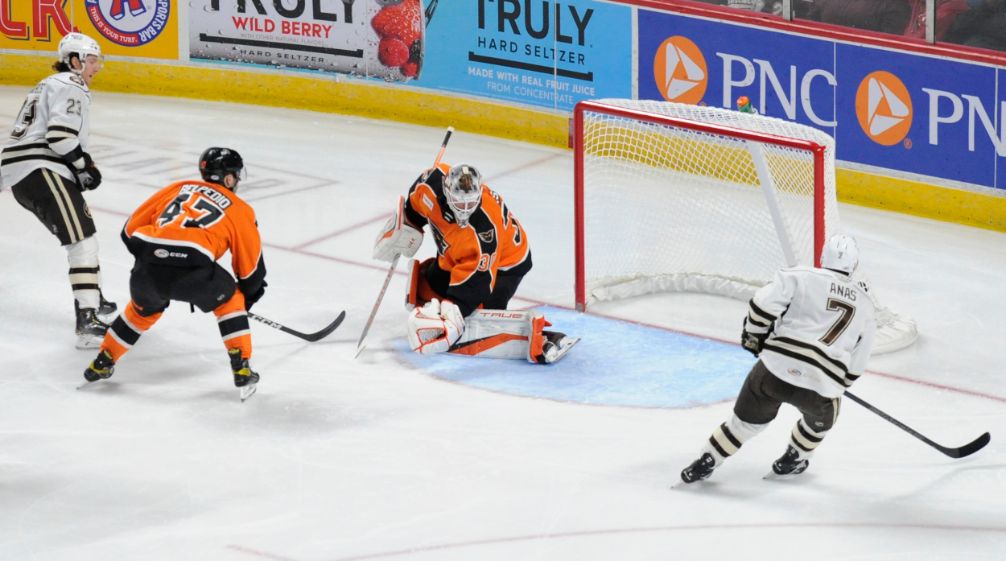 HERSHEY, Pa. – The Hershey Bears and the Lehigh Valley Phantoms met up for the second installment of their season series at Giant Center on Sunday evening. Despite both teams being at the end of a three-game weekend, and at times feeling the effects of it, the circumstances did not stop the teams from finding ways to dislike each other. The Bears got big performances from some of their top scorers to find some much-needed lamp lighting and to snag a 4-1 win on home ice. Zach Fucale earned the win with 22 saves while Samuel Ersson suffered the loss with 30 stops.

The Bears needed a boost on this night to get back in the winning column and got off on the right foot. Their first shot of the night found paydirt with Mike Sgarbossa’s first goal of the season. Sgarbossa previously had been credited with his first of the year when these two teams met up two weeks ago, which has since been credited to Mike Vecchione. Sgarbossa’s tally 43 seconds into the game lifted the Bears to the early lead.

The Bears doubled their lead on the power play later in the frame when Sgarbossa swiped a rebound off of Vecchione’s shot to make it 2-0. It’s a pair of goals that a statistician would love, as Vecchione and Sam Anas assisted on both tallies in the same order.

Lehigh Valley would battle back to split the lead in half with Jackson Cates tallying his first goal of the season on the power play, as he’d bury the rebound of a shot from Olle Lycksell.

The two teams had a bit of a lull in the second period that could be attributed to the fatigue of so many games and travel this weekend, but it ramped back up in the third period when Hendrix Lapierre spotted Bobby Nardella all alone in the high slot, and he rifled a shot past Ersson to make it 3-1. Vecchione would cap off a three-point night and first star honors with a goal against his former team as Nardella would spot him with a pass over the blue line and beat the goaltender to make it 4-1.

We ain't afraid of no ghosts 👻

Here are the highlights from our 4-1 Halloween Eve victory over the Phantoms. pic.twitter.com/Wo9Rx0D4SM

Given that it’s a Bears-Phantoms game, the game would unsurprisingly end with some fireworks, including a big tilt between Dylan McIlrath and Jordy Bellerive as the latter put a hit on his opponent with under a minute to play, leading to a scrap.

The two teams got together a couple of times in the late stages of the game, which resulted in a misconduct for Garrett Wilson after words were exchanged with the referee on his way to the box. It sets the stage for an interesting 12 remaining matchups between the two teams.

Dylan McIlrath takes exception to a hit from Jordy Bellerive and takes him to task! #LHVvsHER pic.twitter.com/isUIjMSCVE

“I thought we played a pretty good game for three games in three nights,” Bears head coach Todd Nelson said after the game. “We had two tired teams going at it and our guys stuck with it. That’s the biggest thing – we stuck with it in the third period and it paid off. Last night, I was saying that it was a step in the right direction and the guys followed it up with a good effort today. Happy with the two points and we needed it, for sure.”

The Bears progressively improved over the weekend, as Nelson referenced. After narrowly missing out on the win on Saturday, Hershey put together an impressive effort to stifle a hungry Lehigh Valley team that ultimately came up empty in three games of their own this weekend. The Bears scored four goals for just the second time this season as the team’s offense came to light with some of the players that are proven scorers at this level. It’s good timing, too, as the Bears prepare to play the Wilkes-Barre/Scranton Penguins for a home-and-home set this weekend, while the Phantoms will look to right the ship on Friday north of the border in Belleville.