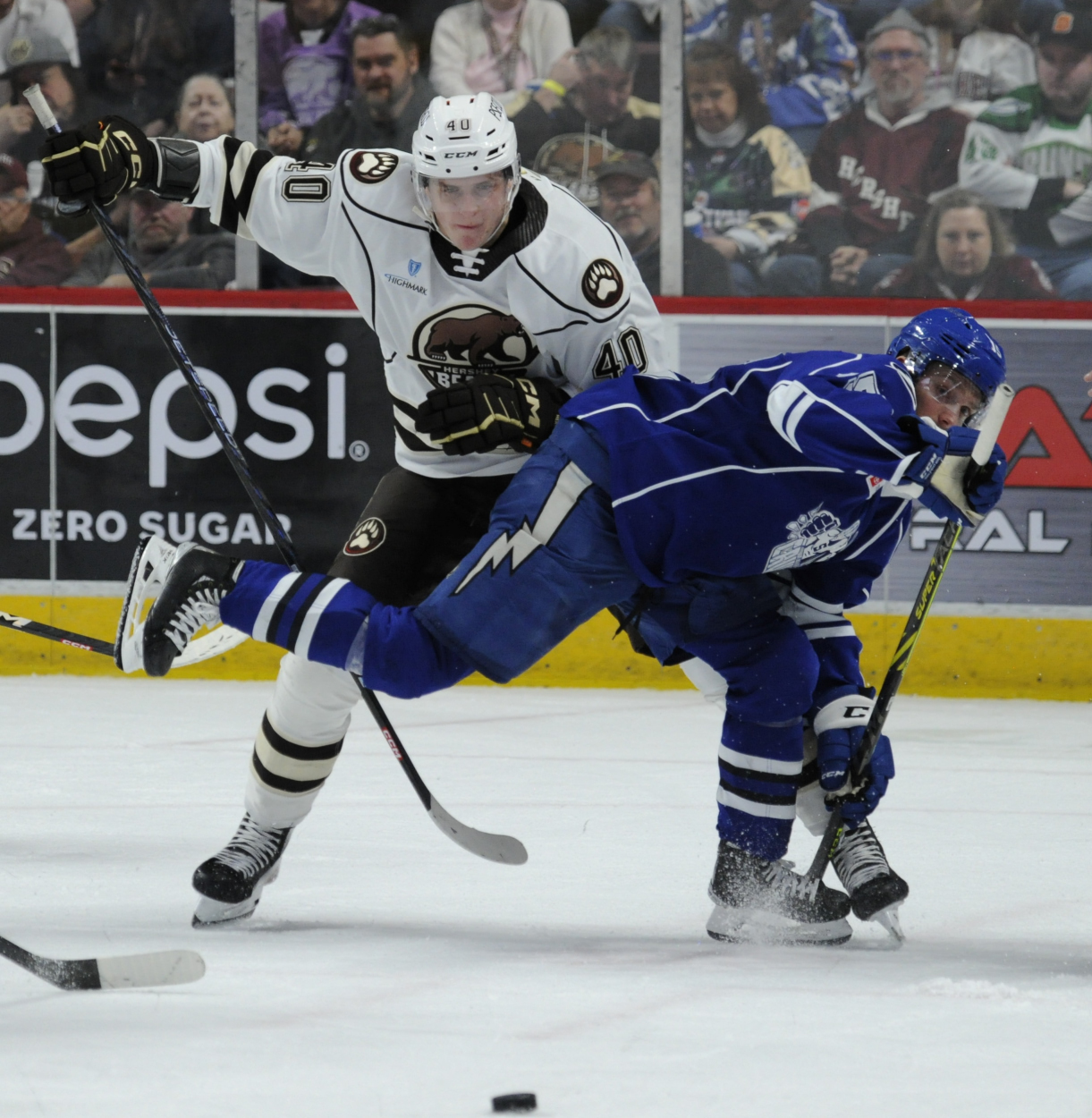 Bears Hold On to Down Crunch

#AHL | @TheHersheyBears put together a strong effort Sunday afternoon to end a brief slide on home ice and thwart the @SyracuseCrunch’s comeback attempt. @FPHBears checks in with the recap and reaction from HC Todd Nelson.

Aliaksei Protas battles for the puck in his second game with the Bears. Photo credit: Carl Minieri/Field Pass Hockey

Bears Hold On to Down Crunch

HERSHEY, Pa. – It was the only meeting between the Hershey Bears and the Syracuse Crunch at Giant Center for the 2022-23 season on Sunday evening before a near-capacity crowd, and although the two teams only meet up twice, it’d be hard to guess that at a glance. The two teams scrapped and clawed at each other, but the Bears held off a third period rally from the visitors to secure a 4-3 win and retake the division lead. Hunter Shepard earned the win in goal with 25 saves, while Max Legace took the loss with 18 saves.

The Crunch came into Hershey with a crunch of their own in goal. With netminder Hugo Alnefelt unavailable and the recently recalled Jack LaFontaine out of the lineup after Saturday’s shenanigans with the Rochester Americans, Syracuse signed goaltender Kaden Fulcher to a professional tryout agreement to back up Legace. Fulcher is a local goaltender who suited up for four games with the ECHL’s Reading Royals and was nearly pressed into action in the second period after Legace went down and was in pain going from post to post on a quick play, but ultimately stayed on the bench.

Hershey came into play on a rare pair of back-to-back losses at home, and it was up to the bolstered Bears to respond. They opened the scoring just under five minutes in when Beck Malenstyn buried a pass from Henry Rybinski for his first of the season, as the duo returned to the lineup to join Riley Sutter on the checking line to get a hardworking goal. Hershey has been working on lines with a plethora of players rejoining the team seemingly all at once, and a trio of players very familiar with the club got it done.

One player who was snake-bit in Saturday’s game was top scorer Connor McMichael, who had a number of big opportunities go by the wayside. He kept on playing hard on Sunday and was rewarded with his seventh goal of the season on a partial breakaway, finishing with a great move to extend Hershey’s lead.

Controversy struck in the middle stanza as an apparent Bears goal was waved off and instead called for interference, and the shift in momentum helped lead to Syracuse’s first goal as Jack Finley got a little space on the rush and fired a shot through Shepard to cut the lead to one goal.

Shortly after the Crunch’s reviewed goal stood, the Bears got back to work and regained a two-goal lead, when Mike Sgarbossa tallied his 11th goal of the season, starting with a good forecheck and leading to him getting the goal.

Just about four minutes later, Hershey would score the only special teams’ goal of the night as Mike Vecchione tallied his 13th of the season on a fantastic no-look pass by Aliaksei Protas, who had a pair of assists in his second game since being assigned to Hershey.

Syracuse pressed hard in the third, outshooting their host by an 11-4 margin, clawing their way to within a single goal. Gabriel Dumont struck for his sixth goal of the season on a brilliant pass by Alex Barré-Boulet, threading it perfectly between the skates of a Hershey defender for a layup.

Then with seven minutes left in regulation, the Crunch tallied again as Shawn Element deflected a shot from Darren Raddysh past Shepard to bring the Hershey lead back down to 4-3.

From there, the Bears clamped down as they have so often when pushed to the brink of losing a lead and some stout defensive play gave them a win on this night.

Four different goal scorers helped us to a 4-3 win tonight over Syracuse in front of 10,400+ at #GIANT Center. Here are the highlights. pic.twitter.com/W40m1BCG39

“I thought we played better than last night,” Bears head coach Todd Nelson said after the game. “We went with the same forward units that we did last night. I felt that we had three or four guys in the lineup that needed some time to get some chemistry and it was better tonight. As far as the game, it was a tough one for the guys to get into a rhythm because there were so many penalties, and then after that I was just trying to find ice time for the guys who were sitting. It kept me on my toes, for sure, but all in all it’s a good two points. Can we get better? Absolutely. We have four or five guys back in the lineup, the chemistry that you had before might not be there.”

“We have to have a killer instinct. We don’t score a lot as a team, so when you get to 4-1 and I thought it should have been 5-1, but anyways, when we get to that point we have to have a killer instinct. We took a four minute penalty kill and we did a good job at [killing] it, but it gives them momentum to come at us. We have to learn in those situations to keep our sticks down and keep the legs moving.”

The lineup adjustments Nelson mentioned are part of a tidal wave of players either returning to the lineup or being assigned from the Washington Capitals. A week ago, the Bears were playing call-up options from their ECHL affiliate, the South Carolina Stingrays, in pivotal roles. But suddenly, the Bears got nearly all the players who were on their injured list back into the lineup while they were off for a week, in addition to players like Malenstyn, Protas, and Joe Snively back from their National Hockey League affiliate. The end result was a nearly full set of new lines and some strong players like Shane Gersich sitting out as a healthy scratch.