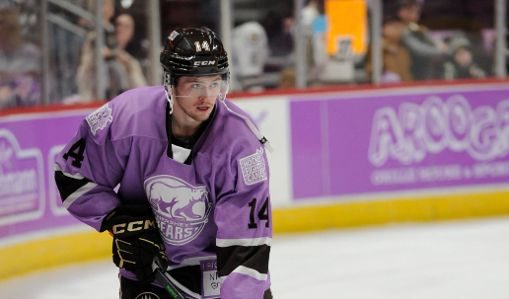 HERSHEY, Pa. – It’s always hard to know what to expect from a team playing its third game in as many days. Although it’s far less common in the American Hockey League in the modern day compared to years past, teams like the Hershey Bears played their third set of six during the 2022-23 season that concluded on Sunday with an emotional Hockey Fights Cancer event in their contest with the Hartford Wolf Pack, who only had two games this weekend. Although the Bears have done well with these kinds of games so far this season, the total time and injuries saw the team slow down a bit as the game went on, and the Wolf Pack prevailed in a 4-2 decision at Giant Center. It’s the first time in ten games at home that the team from the Sweetest Place on Earth suffered a regulation loss in their arena. Zach Fucale suffered the loss in goal with 17 saves.

It was a game that had a fairly intriguing less than 24-hour turnaround for the Bears between games of this set. Although the team had to play without veteran forwards Garrett Pilon and Mike Vecchione due to lingering issues from Saturday’s game, the Bears received a huge addition in forward Connor McMichael, who suited up for his first game in Hershey since the finale of the pandemic-shortened 2020-21 campaign. McMichael had seen limited time in Washington but has mostly been a healthy scratch, and with Hershey’s National Hockey League affiliate set to get some players off of the injured list, McMichael was assigned to clear the way. The game didn’t start in Hershey’s favor as Hartford opened the scoring with Andy Welinski’s second goal in as many games. Welinski has six points in his last six games as the defenseman’s contributions have aided Hartford in their recent success.

The Bears would rally to take the lead into intermission as Julian Napravnik got his first AHL goal as Shane Gersich got the puck to the forward who made the move and beat Louis Domingue on the glove side. The goal has been a long time coming for Napravnik in his eighth AHL contest as he looks to become a regular in Hershey’s lineup with the injuries piling up a bit, and he’s been working hard to achieve that goal early in the season. The Bears took the lead when Henry Rybsinki was rewarded for his strong play by snagging an errant pass from Domingue and feeding Henrik Borgstrom for his second goal in as many games and fourth of the season.

However, the second period was where the game shifted as the Wolf Pack evened the count on a shorthanded goal for Ben Harpur. Ty Emberson scored his first goal as a Hartford defender that ultimately stood up as the game-winner after shifting from the Tucson Roadrunners a season ago where he was minus-25 for the season. Hartford outshot their hosts by a 14-5 margin in the middle stanza, and despite a furious rally by the host Bears to try and tie the game, they couldn’t manage to get one over the goal line and lost by a 4-2 score.

“We were a pretty tired team today, it looked that way,” Bears head coach Todd Nelson said after the game. “Played a great game (Saturday), but (Sunday) was a game where we beat ourselves as well. We got scored on early, battled back, and were up 2-1 and were on the power play and hit the post at the end of the first period, and gave up a shorthanded goal. That’s what swayed the game as far as I’m concerned. You’ve gotta give them credit, they came out and played hard but at the end of the day, you can tell our guys just didn’t have enough juice. It was our third game in a row and it was their second game [in a row]. Just get rested up and ready to go, we have to stick to our game plan which we got away from it tonight, you’re fatigued also you make decisions you wouldn’t normally make, and it was frustrating obviously but the guys just didn’t have it.”

The game featured plenty of edge between two teams that play the bulk of their season series in the first two months of the season. Fights, testiness, and plenty of chirping abounded in this game, and the two teams won’t have to wait long to see each other again as the series shifts to Hartford for two games this coming weekend. When those two games are complete, there will be just one matchup between the two teams on the schedule for the rest of the season unless the teams meet again in the Calder Cup Playoffs, where the Wolf Pack haven’t been since 2015. Each team has a Wednesday night game before then, as Hershey travels to Springfield while Hartford visits Bridgeport.