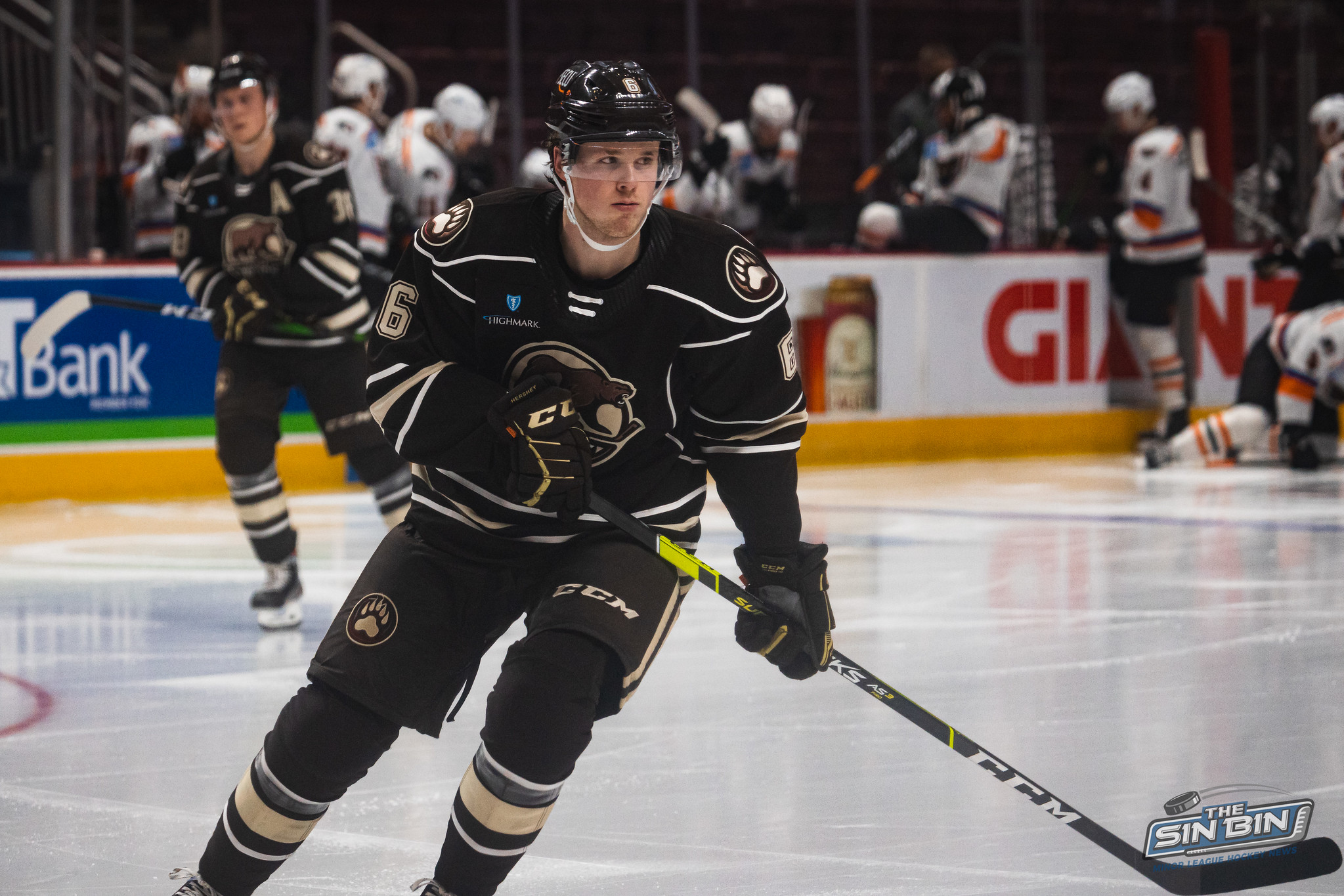 HERSHEY, Pa. – One of the most interesting players to watch for the Hershey Bears in the 2021-22 season has been defenseman Lucas Johansen. The young defender, who signed a one-year contract with the Washington Capitals this past summer for another year has quickly shown the potential that the team saw when they drafted him 28th overall back in 2016, rising to one of the top players in his position not only on the team but around the AHL as well. It’s equally safe to say he’s thrived with an expanded role and his stock in the organization has risen significantly.

One of the easiest stats to point at to show Johansen’s success lies in the fickle plus/minus category. While some in hockey would be quick to throw out the category altogether, in Johansen’s case it’s well worth watching out for as his plus-21 rating going into Wednesday’s action places him second on the team behind recalled teammate Joe Snively, but third in the entire American Hockey League. The stat category is one that is led by defenders in the AHL in terms of active players, with Bakersfield’s Vincent Desharnais owning the top spot at plus-23. This stat is particularly noteworthy for defenders as it tends to be a general indicator (however imperfect it is) of how plays are ending when that player is out on the ice, and Johansen has struck a chord between producing points and keeping pucks out of his own net, only finishing games with a minus once in his last ten games and just six times overall in 41 games played.

Not to mention the fact that Johansen has come out flying this season, only five points off of his rookie season-best of 27 set back during the 2017-18 season. He scored the first goal of the season for the Bears, and has nine points (one goal, eight assists) in his last ten games prior to missing this past Sunday’s game at home versus Utica.

Johansen is a great puck-moving defenseman, exemplified by his assist on Mike Vecchione’s goal that gave Hershey a 2-0 lead a week ago in Utica. He swiftly and efficiently picked up a cross-ice pass from Alex Alexeyev on his backhand and had his head up as the puck went to the forehand to spot Vecchione with time and space in the midst of a Utica line change, and the high scoring forward made no mistake in beating the goaltender. Johansen had another nifty assist minutes later, putting the puck on a platter to Brian Pinho to settle and shoot with the goaltender on the move. With Johansen and Pinho out for the rematch on Sunday, their absences were certainly felt with the Bears dropping that game.

Happy birthday Mike Vecchione! He fires a laser after a great feed from Lucas Johansen for his 13th of the season! #HERvsUTI pic.twitter.com/Ij7mHUq7GF

It’s a fantastic turnaround for Johansen and the Bears, and it’s even earned him some time with the Washington Capitals during some of their roster issues this season. Johansen had an assist in one game with the Caps on December 31, and although the team has been pretty well-stocked and injury-free on the blue line this season, he should be high on their list for a promotion in the coming seasons, as he is a restricted free agent at the end of the campaign. His health has been an issue after injuries ruined the 2019-20 and 2020-21 campaigns for him, both of which he looked solid in for the brief amounts of time in action. Johansen has largely been paired with a new face to the Bears this season in Dylan McIlrath, and their pairing has been one of the best on the team to date. McIlrath’s plus-12 ranks only behind Johansen and Snively, nearly matching a career-best plus-13 set in 2018-19, and might have been considered an unlikely duo for success a summer ago.

Brian Pinho tallies his sixth of the season on the rush, thanks to another great pass from Lucas Johansen! #HERvsUTI pic.twitter.com/ow5rL5lvO2

For now, it’s worth watching how Johansen and the Bears fare this spring as they chase one of the top spots in the Atlantic Division. When the dust settles, Johansen deserves a lot of recognition not only in the organization but in the rest of the league for such a dramatically improved season in The Sweetest Place on Earth and hopefully pushes the Bears to new heights beyond the regular season.