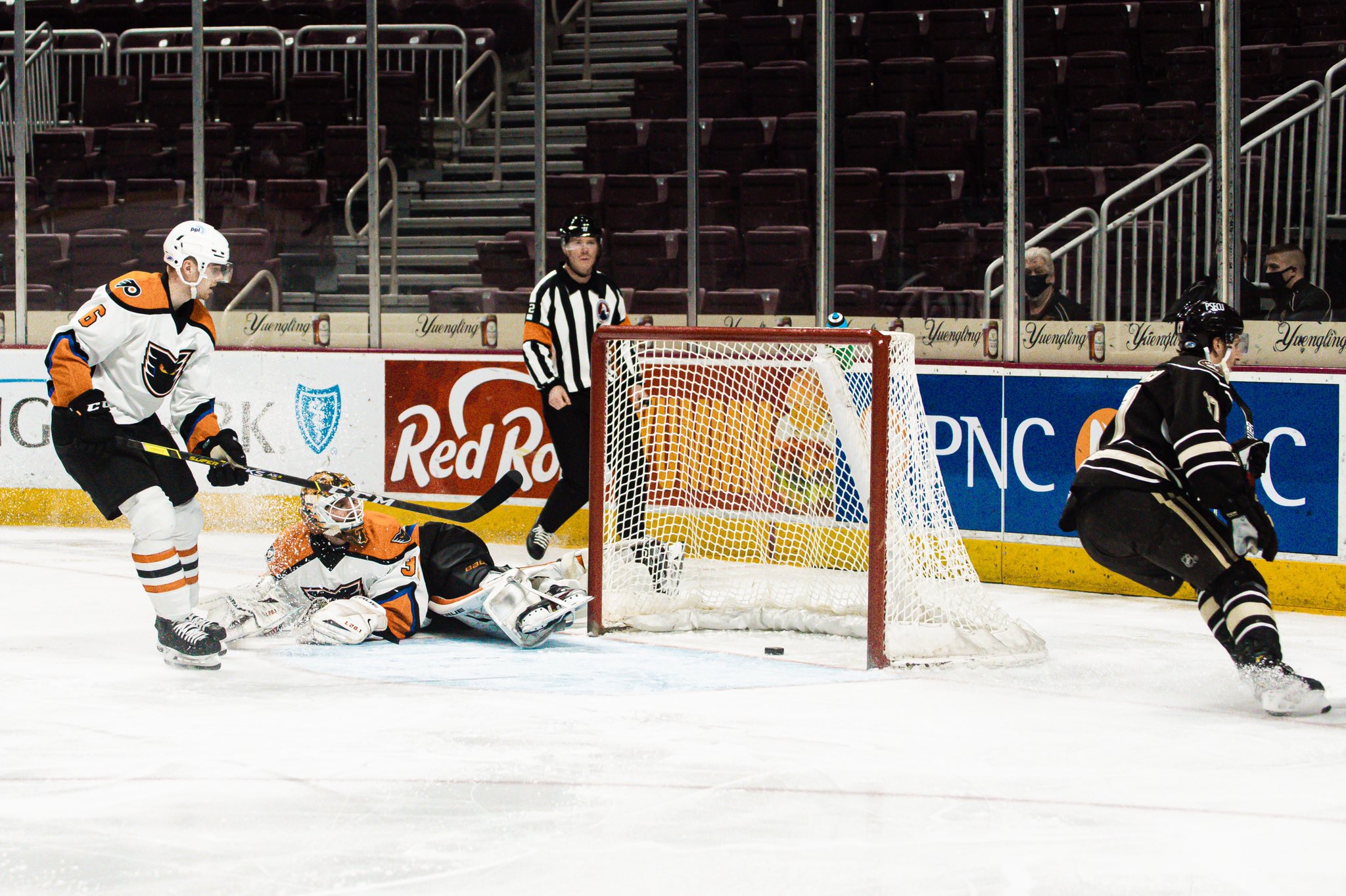 HERSHEY, PA – The Hershey Bears used a high-scoring start to the second period to earn their first win over the Lehigh Valley Phantoms this season at Giant Center on Saturday.

The two teams played a very similar opening to the game as they did in Wednesday’s contest, with very few shots and a lot of neutral zone play between the clubs. However, it would be Hershey getting on the board first when Axel Jonsson-Fjallby scored his third goal of the season on a great shot from the blue line off a turnover forced by Connor McMichael. It was only the ninth shot of the period but got through Phantoms goaltender Felix Sandstrom to make it 1-0 Bears.

The floodgates would open in the second period, as the Bears rattled off three goals in the span of 2:01 to jump out to a 4-0 lead. Jonsson-Fjallby would tally his second of the game just after a power play concluded for Hershey, as Brett Leason found the Swedish forward alone in front of the net to double the Bears’ lead. Just over a minute later, Garrett Pilon and Mike Sgarbossa went up the ice on a two-on-one break, with Sgarbossa finishing the play with a great move to make it 3-0 Hershey.

The Bears would get one more goal after Sandstrom was swapped for Zane McIntyre when Kale Kessy scored his first goal since joining the Bears for the 2019-20 season. Kessy picked up the puck on the rebound and fired the shot that beat McIntyre for a 4-0 lead for the home team. Lehigh Valley would get a goal on the power play at the tail end of the game when Chris Mueller deflected a Tyson Foerster shot that broke the shutout bid for Bears goaltender Zach Fucale with just over a minute left in the game. The Bears earned a 4-1 win.

Fucale finished the game with 17 saves, while Sandstrom made five saves on eight shots and McIntyre made 14 saves on 15 shots in the game. Kessy was named the team’s most valuable player in a photo posted to the Bears’ social media team.

Sweetest Player on Earth voted on by the locker room ?

Hershey improves to 6-2-2-0 on the season, while the Phantoms fall to 5-2-2-0. With nearly identical records, it seems the two teams are set to continue dueling for the top spot in the North Division. Saturday’s game was the fourth meeting of the season between the two clubs, and they’ll meet ten more times before the season concludes, so there will be plenty of battles to come between two fierce rivals. Both teams now have a regulation win, and the Phantoms have two overtime victories in the season series so far.

The Bears host the Binghamton Devils in a Sunday afternoon contest, while the Phantoms will visit the Wilkes-Barre/Scranton Penguins on Monday evening.