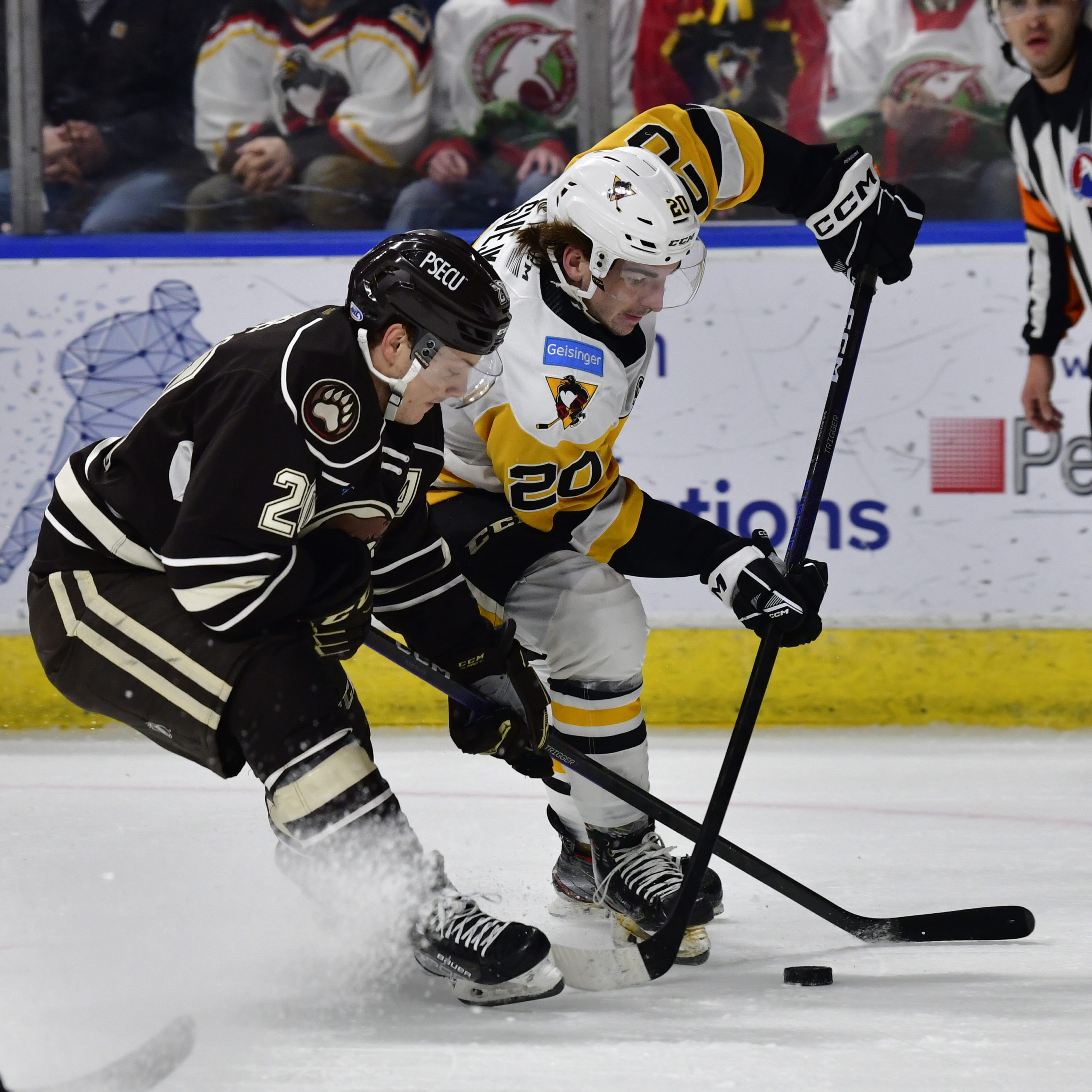 WILKES-BARRE, Pa. – It was the ninth matchup of the season between the Hershey Bears and the Wilkes-Barre/Scranton Penguins on Tuesday night as the two bitter Pennsylvania rivals dueled past regulation for the fourth time of those nine games. The Bears found another way to win as it came down to a shootout, where Connor McMichael had the decisive goal and Zach Fucale delivered a clean sheet in a 2-1 decision. Dustin Tokarski was magnificent in goal with 38 saves in the loss as the Penguins were able to pick up one important point.

The two teams were both fresh off of their respective Christmas breaks and had not practiced prior to Tuesday’s game, but still delivered an entertaining contest to the crowd of over 4,800 that made it out to Mohegan Sun Arena. Wilkes-Barre withstood an early barrage of shots by the visitors from the Sweetest Place on Earth as Hershey put up 15 shots to just five for the home team. The Bears would finally break through with a goal from Ethen Frank, who has carved out a niche for himself on the power play with a blast from the top of the left circle to make it 1-0. Frank scored a near-identical goal in Hershey’s last game, and this one brings him into a tie for the team lead with 11 on the season for the rookie forward.

The top of the left circle is becoming @efrank_98's office 💼

Wilkes-Barre found a way to tie the game at one in the late stages of the second period as Alex Nylander continued to do what he does best, which is burn the Bears. He picked up the puck along the goal line and beat Fucale low to the glove side for his 11th goal of the season to even things up at one apiece. Hershey might have liked to do a little more damage with the power play despite scoring one goal in this game but were only one-for-five in the game. Wilkes-Barre similarly had just one goal on the power play in only three chances.

Connor McMichael has the shootout winner for the Bears! #HERvsWBS pic.twitter.com/tZqJLp9tQg

Despite trading quality chances in the third period and overtime, the game was destined to go beyond the 65 minutes of allotted time for action into a shootout. The Bears got some good fortune when the puck didn’t cooperate with Nylander to open the skills competition, and McMichael buried his shot low and through Tokarski’s pads despite the netminder getting a piece. Mike Sgarbossa was unable to finish it off in the third round, but Fucale came up large to get the Bears out of Wilkes-Barre with the extra point. The win is Hershey’s fourth straight, while Wilkes-Barre continues to be winless in its last four contests. Sgarbossa extended his point streak to four games with an assist on Frank’s goal while defender Aaron Ness tallied a point for the third straight game. Frank’s goal gives him five points in his last three games played.

The Bears had to make do without some of their top guns in this game. Sam Anas, Henrik Borgstrom, Julian Napravnik, and Henry Rybinski all missed the game due to injury or illness, and the team saw the American Hockey League debut of Kevin O’Neil and the Hershey debut of Alexandre Fortin as a result. The Bears will return home to face the Providence Bruins on Wednesday in an unusual scheduling format. The Bruins will then visit the Penguins on Friday before returning to Hershey for a New Year’s Eve showdown with the Bears, making the Bruins the next opponent for both of these teams.