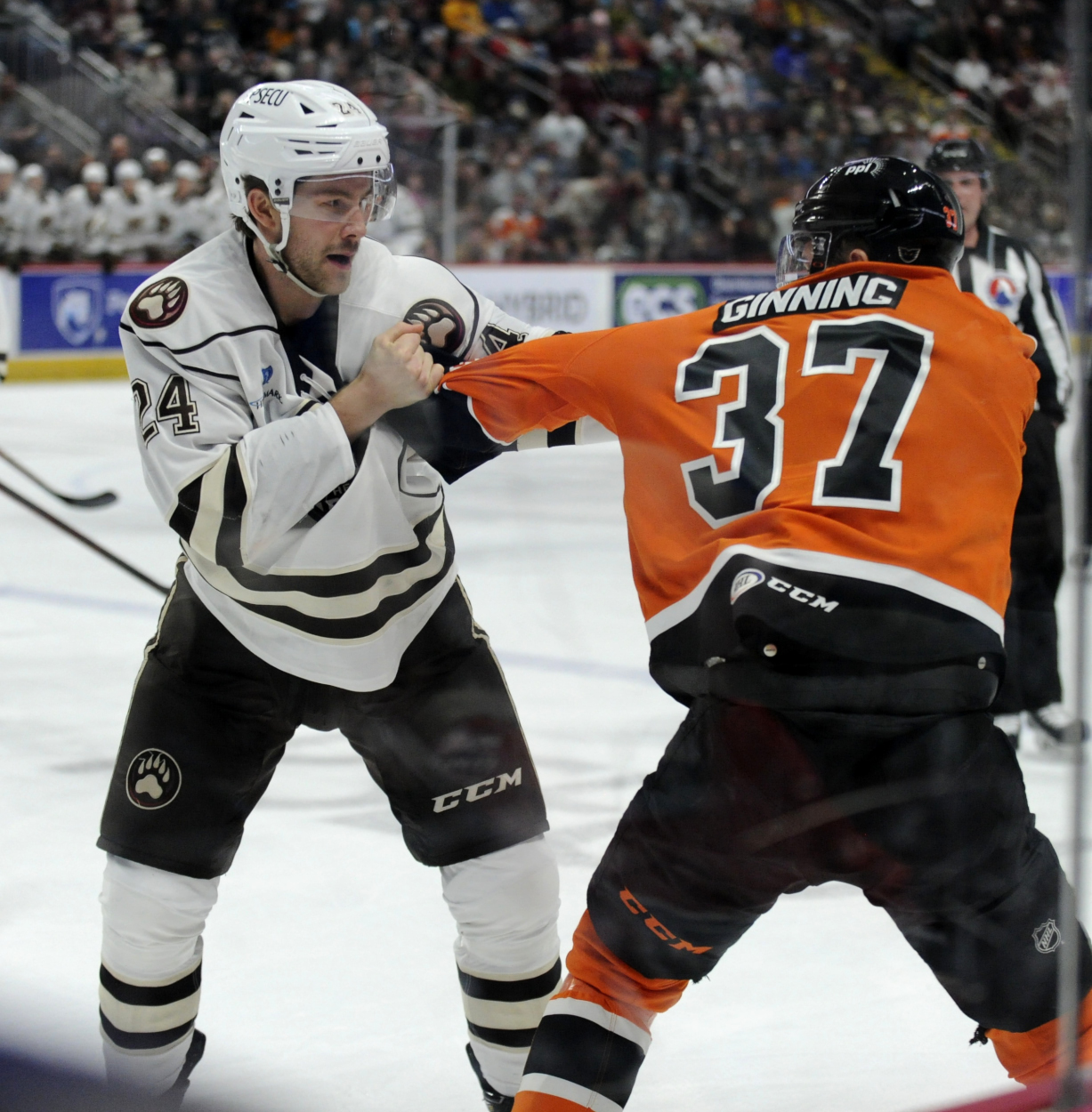 HERSHEY, Pa. – The Hershey Bears and Lehigh Valley Phantoms met up for the third game in three nights for each team on Sunday. Despite the natural wear and tear of that scheduling, it didn’t take much for two old rivals to get going against each other. After trailing 3-2 in the third period, the Bears rattled off three goals in 1:50 to take a 5-3 decision in front of their home crowd. Hershey goaltender Clay Stevenson continued his great start by earning his third win in as many games with 25 saves, while Samuel Ersson took the loss with 24 stops.

Hershey jumped off to a first-period lead when defenseman Aaron Ness scored on a rocket for his second of the season. Sparks flew between the teams as Riley Sutter dropped the gloves with Adam Ginning after the latter put a big hit on Hershey forward Shane Gersich.

Both teams traded goals in the second period, with Artem Anisimov scoring his eighth of the season on a deflection for a power-play marker followed by a shorthanded goal for Jordy Bellerive. The forward made a nice play to knock away an airborne pass in his own zone and chase after it, eventually beating Stevenson on the rush.

Hershey’s power play was a bit of a sore spot in this game but it quickly evened the game after a shorthanded tally with Hendrix Lapierre’s eighth goal of the season, perfectly tapping in a feed from Henrik Borgstrom. The Bears had only one power play tally in five chances, and it got to a point where head coach Todd Nelson iced an entirely new unit to simplify the unit and challenge his top scorers, which would come about in the final frame.

Hershey trailed 3-2 after Bellerive scored on a crazy bounce that spiked off of a defender’s skate and passed by Stevenson. After a challenge, the Bears responded with Mike Sgarbossa’s tenth goal of the year as he’d get sent on the rush by Ethen Frank. His shot beat Ersson to even the count at three.

Then, 30 seconds later, the Bears scored the eventual game-winning goal when Connor McMichael skated in and whipped a shot top shelf. Only a minute and 20 seconds later, the Bears added insurance with Mike Vecchione’s 11th of the season, a loose puck from Sgarbossa and Frank for another big performance from the top line. Sgarbossa continues to be a clutch performer for the Bears. with four points in his last two games. Sgarbossa, Frank, and Vecchione all finished with multi-point games in a 5-3 final score in front of 8,279 fans at Giant Center.

Three goals in 1:50 in the third period led us to a 5-3 win over Lehigh Valley tonight. Here are the highlights from the big victory! pic.twitter.com/rxur2RqlJX

“Nothing was working,” Nelson said of his power play after the game. “The second unit scored the goal and the other unit wasn’t connecting. I had enough, so I put out three defensemen, put [Dylan] McIlrath in front of the net and wanted shots to go on net. The point got across and I thought those guys responded as the game went on. I think once we got that goal off that two-on-one, Sgarbossa’s goal to tie it up, I think that really sparked us. With the guys seeing that it was only seven minutes left or whatever it was, anytime you play three games in three nights you see that light at the end of the tunnel, that goal got the fans into it, then Mikey made a great shot on the go-ahead goal. The insurance marker was a hard-working goal, got shots to the net and banged in the rebound.”

Before and during the game, Hershey honored longtime staff member Dan “Beaker” Stuck prior to his retirement at the end of the calendar year. Stuck has been part of the Bears’ staff since 1977, helping out the team before becoming Hershey’s athletic trainer until he shifted to the team’s Wellness Manager. Former Bears and current Washington Capitals play-by-play voice John Walton was on-hand to conduct the pregame ceremony. Stuck has worked over 2,600 games for Hershey during his tenure, including five Calder Cup Championships and seven All-Star Games.

This latest victory is an important one for Hershey in the standings. With the rest of the Atlantic Division idle a week before Christmas, the Bears earned two points to extend their lead to three over second-place Providence. They also became the American Hockey League team to hit 40 this season. However, changes may be coming as both Borgstrom and Henry Rybinski missed time in the third with injuries, a situation to monitor closer to their next game.

Hershey’s last game before the Christmas break is on Wednesday in a rematch with Lehigh Valley at PPL Center. Lehigh Valley will have one extra match before the break as they make a trip to visit the Springfield Thunderbirds on Friday, but they’ll be out for revenge after their four-game point streak was snapped in this game.