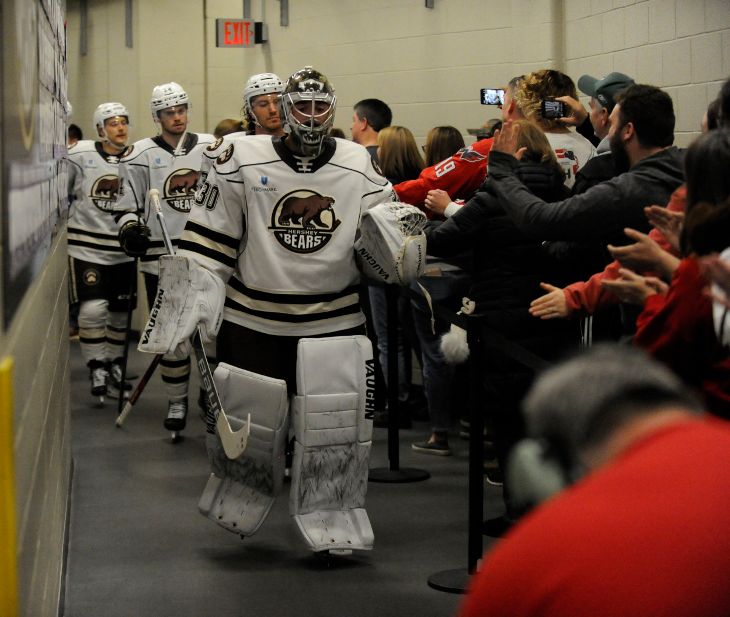 HERSHEY, Pa. – Although it’s been a total team effort for the Hershey Bears as November comes to an end, individual honors are quickly following suit with goaltender Hunter Shepard receiving the nod as the American Hockey League’s Goaltender of the Month, with a 6-0-0-0 record with 147 saves on 157 shots faced. The mark is good for a 1.63 goals-against average and a 0.936 save percentage as a big factor in Hershey’s rise in the standings to first overall. Shepard’s six wins accounted for over half of Hershey’s 11 wins in 13 games during the month, and included a save that ranked second on ESPN Sportscenter’s Top Ten Plays on Thanksgiving Eve against the Springfield Thunderbirds.

It’s been a meteoric rise for Shepard, who signed with the Bears as a free agent during the summer of 2020, turning pro after leading the University of Minnesota Duluth to back-to-back championships in 2018 and 2019. Shepard was a highly decorated goaltender in his time with UMD, being named Goaltender of the Year during the two championship seasons he had there in 2018 and 2019, holding the NCAA record for consecutive starts with 115 (a streak that began on October 21, 2017 and concluded on March 7, 2020), had the school’s all-time wins record with 76, as well as goals against average (1.94), save percentage (0.922), and shutouts (17), and even served as team captain in 2019-20, the first goaltender to do so in 43 years. That’s not even mentioning his All-American nods in his last two seasons, NCHC Goaltender of the Year in his last two seasons, and a three-time Mike Richter Award Finalist.

He may well have backstopped the team to a third championship in 2020 before the season was cut short due to the COVID-19 pandemic, making his debut with Hershey’s ECHL affiliate, the South Carolina Stingrays, for 21 games during the 2020-21 season as well as 13 playoff games in the truncated Kelly Cup format in which the Stingrays made it to the last round but ultimately fell short. Shepard played in three games for the Bears during that season, memorably posting a shutout in his AHL debut with 28 saves over the Lehigh Valley Phantoms and only allowing three goals in three games played.

Last season, Shepard again found himself bouncing around a bit, with 23 games with the Stingrays and nine with the Bears. as well as different stints with Hershey’s National Hockey League affiliate, the Washington Capitals. Shepard backed up a few games but did not get into action that season and dazzled in another brief stint in Hershey with a 2.06 goals-against average, a 0.922 save percentage, and a 5-3-0-1 record. Over that span, Shepard’s time in Hershey was limited due to the organization’s sheer goaltending depth with the likes of Pheonix Copley and Zach Fucale in Hershey’s rotation, as well as AHL graduates Vitek Vanecek and Ilya Samsonov manning the crease in Washington a season ago. Shepard backed up Copley during the late stages of the season and during the 2022 Calder Cup Playoffs.

The organization recognized Shepard’s talent, and the goaltender was upgraded from an AHL contract in 2020-21 to a two-year NHL contract during the summer of 2021. This season, on the second year of the contract, the organization made way for Shepard to be a full time AHL goaltender as part of a tandem with Fucale, and the results have spoken for themselves so far. Hershey’s tandem currently ranks second and third between Shepard and Fucale, respectively, only trailing one of the league’s most outstanding goaltenders in Dustin Tokarski, but the Bears’ tandem is arguably the best in the league and continues a recent history of Hershey goaltenders leading the way in the AHL.

Shepard was strong in his first two starts, playing a large role in Hershey getting beyond regulation in both of those games, as the team was still finding its way in the early stages of October, and turned up the heat between the pipes in November as the tandem played a big part in close wins for the team. Hershey’s 11-2-0-0 record in November is in large part thanks to those efforts in goal.

Even with all of the success they’ve accumulated in goal over the years, the award has been a rare one to come by for Bears goaltenders, with the last Hershey goaltender to receive the award being Braden Holtby, who won the award in December of 2012, during the first half of the Bears’ season in which the NHL was not playing due to the 2012-13 lockout.

It all led up to a well-deserved call-up for Shepard to the Capitals only a few days after the award was announced. The Capitals have started to get healthy again after some struggles earlier this season, but it hit the crease for the first time as Darcy Kuemper suffered some head contact in Washington’s western Canadian road swing, exiting the game and necessitating a recall from Hershey. After practicing with the Bears on Saturday, Shepard was on his way to join the team in Edmonton before warmups on Sunday afternoon. He joins Charlie Lindgren as the current Washington tandem between the pipes.

“Hunter earned it,” Bears head coach Todd Nelson said. “He played outstanding for us this year, he’s a player that brings it every night that he plays and gives us a chance to win. It was well deserved; we wish him the best and we’ll see what happens down the road here.”

It all adds up to what has been an excellent find in goal by the Capitals and the Bears in a long history of strong goaltenders starting their professional careers in the crease at Giant Center. It couldn’t come at a better time for the Bears, a team that is hoping this season will finally be the year they can pursue a long championship run in the spring after the 2019-20 season and subsequent years derailed a few strong groups. When Kuemper returns to health, Shepard will most likely return to the Bears to continue his strong start to the season, but the recognition this early in his professional career is exceptional, and his promotion to the NHL is well deserved.