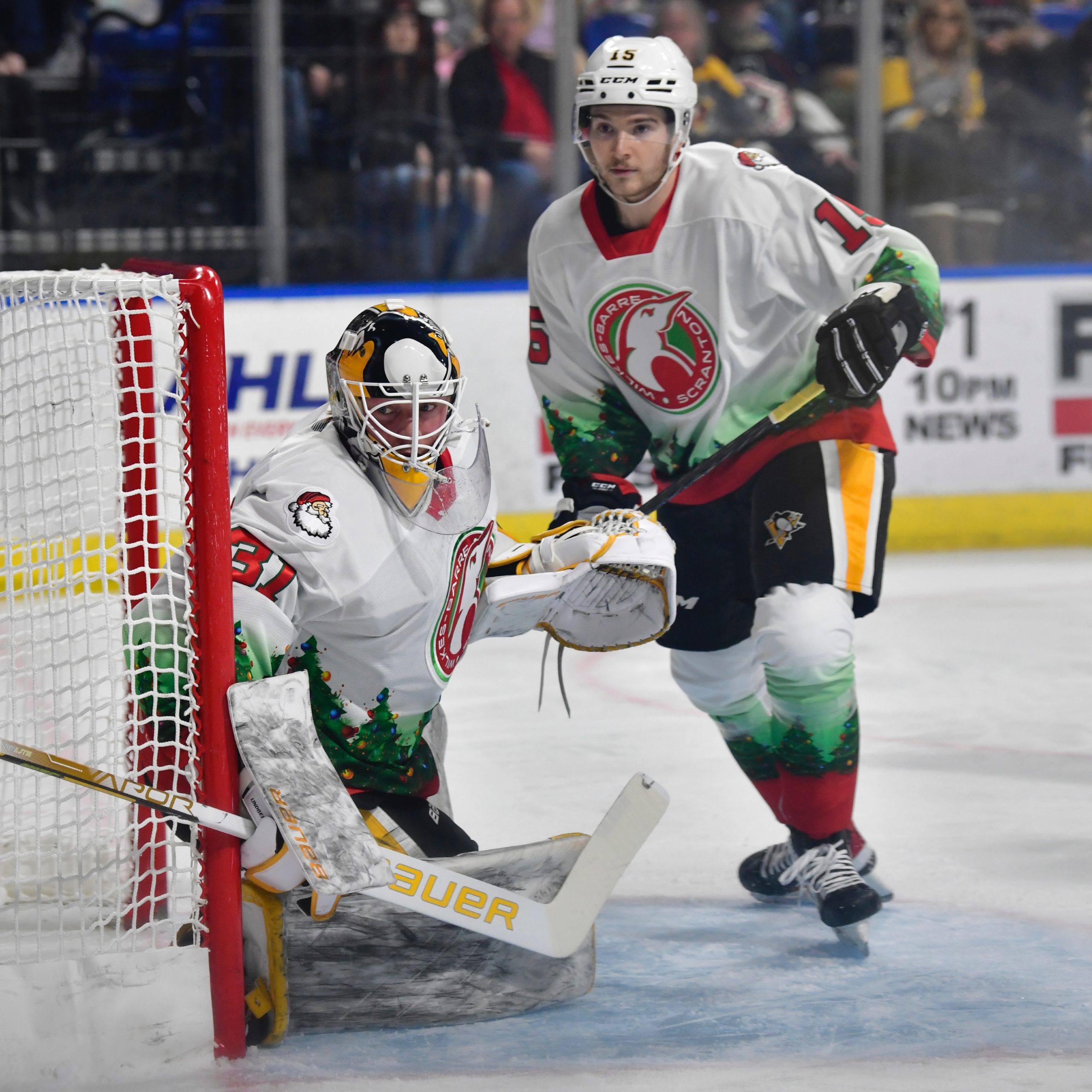 WILKES-BARRE, Pa. – It was the second matchup of the weekend between the Hershey Bears and the Wilkes-Barre/Scranton Penguins and the eighth of 12 in the season series. Saturday’s contest was much closer to what one would have expected in the billing between these two teams, as a 1-1 tie after sixty minutes was decided in the extra session when Mike Sgarbossa scored his second goal of the game to lift the visiting Bears to a 2-1 win on Teddy Bear Toss Night in Wilkes-Barre. Clay Stevenson, who was thrust into the spotlight for the Bears, made 23 saves, while Filip Lindberg suffered the loss.

After earning his first career American Hockey League win in his first start a week ago, Stevenson picked up the start in this game, and figures to be the starter for the foreseeable future after Zach Fucale was recalled hours before the puck dropped at Mohegan Sun Arena. Bears backstop Hunter Shepard was revealed to be day-to-day with an injury.

It’s the latest in a long list of missing players between both teams, with the Penguins missing a boatload of players at forward and defense. In fact, the crease seems to be the only position in which the Penguins had their full tandem intact.

No matter which players were dressed for these teams, it doesn’t take much to stir the pot and give viewers a good show. The Bears opened the scoring just prior to the midway point of the first period when Sgarbossa scored his first of the game, which was really made possible by Gabriel Carlsson. Fresh off of scoring his first goal with the Bears, Carlsson made a nice move on the breakout to get the puck to Sgarbossa, and drove the net to create a bit of a screen on the goal.

The Bears hunkered down and seemed determined to spoil the holiday party in Wilkes-Barre like the uncle no one is eager to see at Christmas, as the Penguins fans were nearly forced to toss their plush bounty at the second intermission. With only 72 seconds to spare, though, Alex Nylander saved the day by potting a blocked pass along the boards by Stevenson behind the net to send the fur flying.

The two teams traded scoring chances, with the Penguins nabbing the majority of shots in the third period. Stevenson stood strong alongside his counterpart in goal as Lindberg played a large part in getting the game to extra time. Both teams secured a point and went to extra time, nearly playing out the entire frame before Sgarbossa went in on the rush and lifted a backhand shot over the shoulder of Lindberg to send the Bears home with two points. Sgarbossa has been great for the Bears of late, scoring 12 points over his last eight games.

The win is a nice response for the Bears a day after falling flat against these same Penguins a day prior. With Wilkes-Barre being a thorn in Hershey’s side for most of the season series to this point, the Bears proved they can win a low-scoring contest with their in-state foe.

On the other side of things, the beat marches on for the Penguins despite losing some of their top scorers like Filip Hallander, Sam Poulin, Ty Smith, and Drew O’Connor. The Penguins have points in their last four games and pull to within three of third-place Bridgeport. Saturday’s game was Wilkes-Barre’s last home game until two days after Christmas when they host the Bears again.

Hershey returns home to host the Lehigh Valley Phantoms this evening, while Wilkes-Barre heads north for a trio of games north of the Canadian border before Christmas.