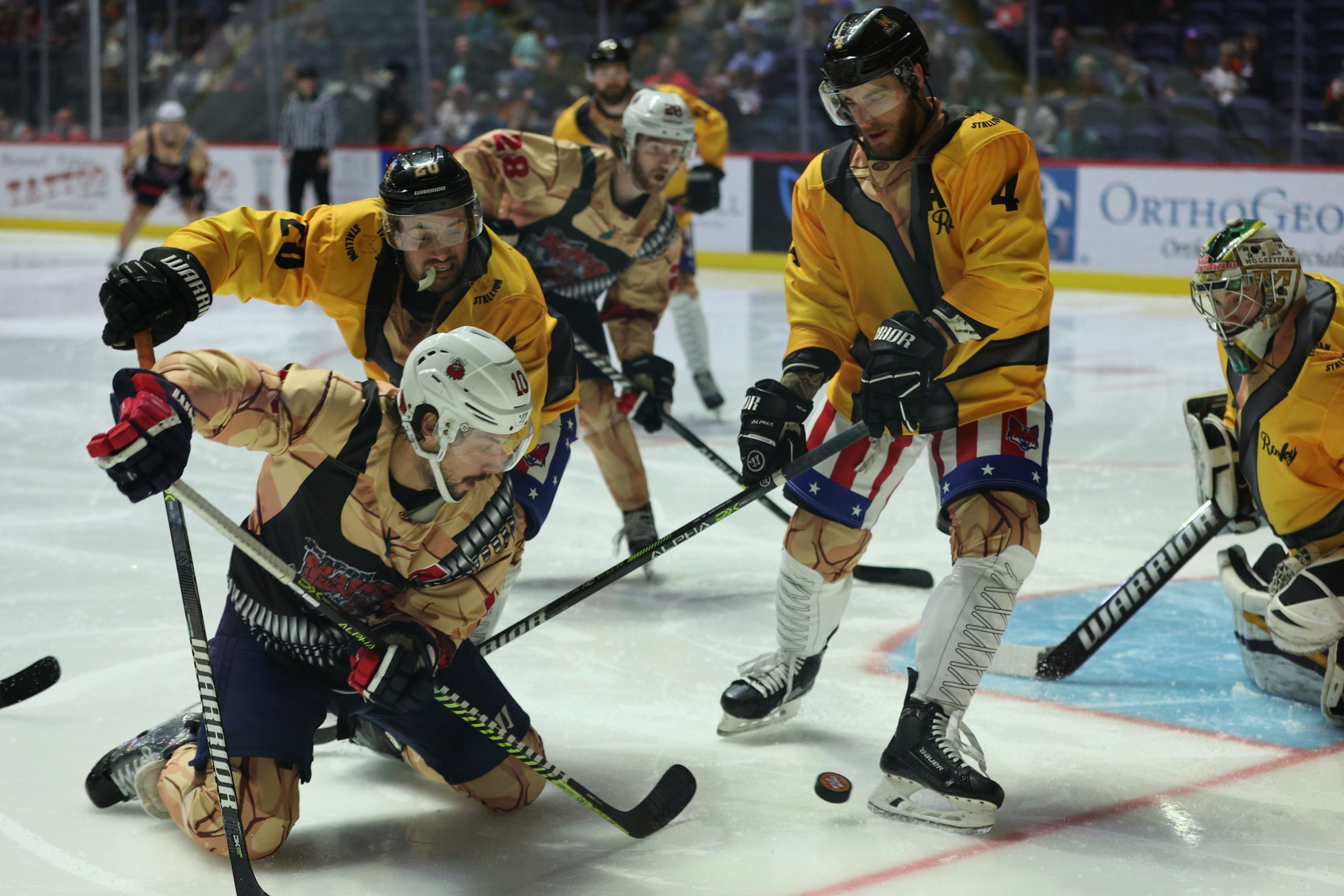 Best’s Hat Trick Too Much For Mayhem In Physical Contest

Best’s Hat Trick Too Much For Mayhem In Physical Contest

MACON, Ga. – With hopes of the postseason berth all but gone for the Macon Mayhem, there’s not much playoff life at stake with about a month remaining in the regular season.

But there is, however, the chance to build momentum toward next season and also slow the path of teams trying to jockey for position in the President’s Cup Playoffs.

The Mayhem did just that this weekend. After finally breaking through on Friday for their first win of the season against Fayetteville in a 3-2 win, Macon (8-31-3, 19 points) fell in the second game in two nights at the Macon Coliseum between the teams in a feisty 4-1 loss in the 13th meeting this season between the two teams, all but one that has been won by Fayetteville (30-13-1, 61 points).

“The last two nights, we played with some grit and some fire,” Mayhem head coach Zac Desjardins said.

The Markmen singlehandedly got an offensive edge from Taylor Best, who at 45 seconds into the second period registered a hat trick. That was enough for Fayetteville, locked in a fight with Quad City for fourth place, to have a cushion to win and tack on a late empty-net goal by Zach Remers.

On Rocky vs. Rambo Night, with each team wearing specialty jerseys, Macon donning Rambo-themed jerseys, and Fayetteville in Rocky versions, the Mayhem showed plenty of fight in more ways than one.

First, it was on the scoreboard. After Best put the Marksmen up 1-0 11:45 into the game, the Mayhem got an equalizer as Devin Brink broke free on the left side to slap a rebound past Marksmen goalie Brent Moran just 1:10 after Best’s first goal.

But there was little that Macon could do to counter Best, who went top shelf late in the first to beat Mayhem goalie Michael Stiliadis before his third goal early in the second on a power play. Stiliadis stopped 30-of-33 shots with Moran turning away all but one of 37 shots.

“Best, he got a hat trick. It happens,” Desjardins said. “He’s playing hot and he’s a good player.”

But Macon, which had a handful of chances over the final two periods turned away, showed grit in areas besides the scoreboard. A few good-natured tussles also took place, the first being in the opening period with Taylor Cutting and Donald Olivieri dropping the gloves while in the third, Macon’s Caleb Cameron and Fayetteville’s Shane Bednard traded punches and got five-minute majors for their altercation. But it was all a precursor to the final minutes. With just under five minutes to play, a hit leveled against Macon sparked pushing and shoving from both sides. It all ended with Remers for Fayetteville and Macon’s Cameron and Slade picking up roughing penalties.

In the midst of it all, both head coaches engaged in a shouting match, appearing to point fingers at one another before both of them, Desjardins and Fayetteville’s Cory Melkert being simultaneously ejected from the game.

“I was just trying to stand up for my players a little bit. I wasn’t too happy about the hit that led to the four-on-four right before that. And their players…you’re up 3-1 and you’re the better team, so why are you chirping?” Desjardins said. “Some of the stuff they were saying was not appropriate. As a league, we are trying to buckle down on that. The linesmen were like, ‘yeah, whatever,’ and I am saying, hey, ‘knock it off.’ Cory over there got offended by me telling them to ‘be quiet, let’s play the game’ and it started into a lot of four-letter words and it went from there.”

With the season nearing its end, sticking up for his players is something that Desjardins does not take lightly.

Both teams play again next Friday and Saturday in Fayetteville.