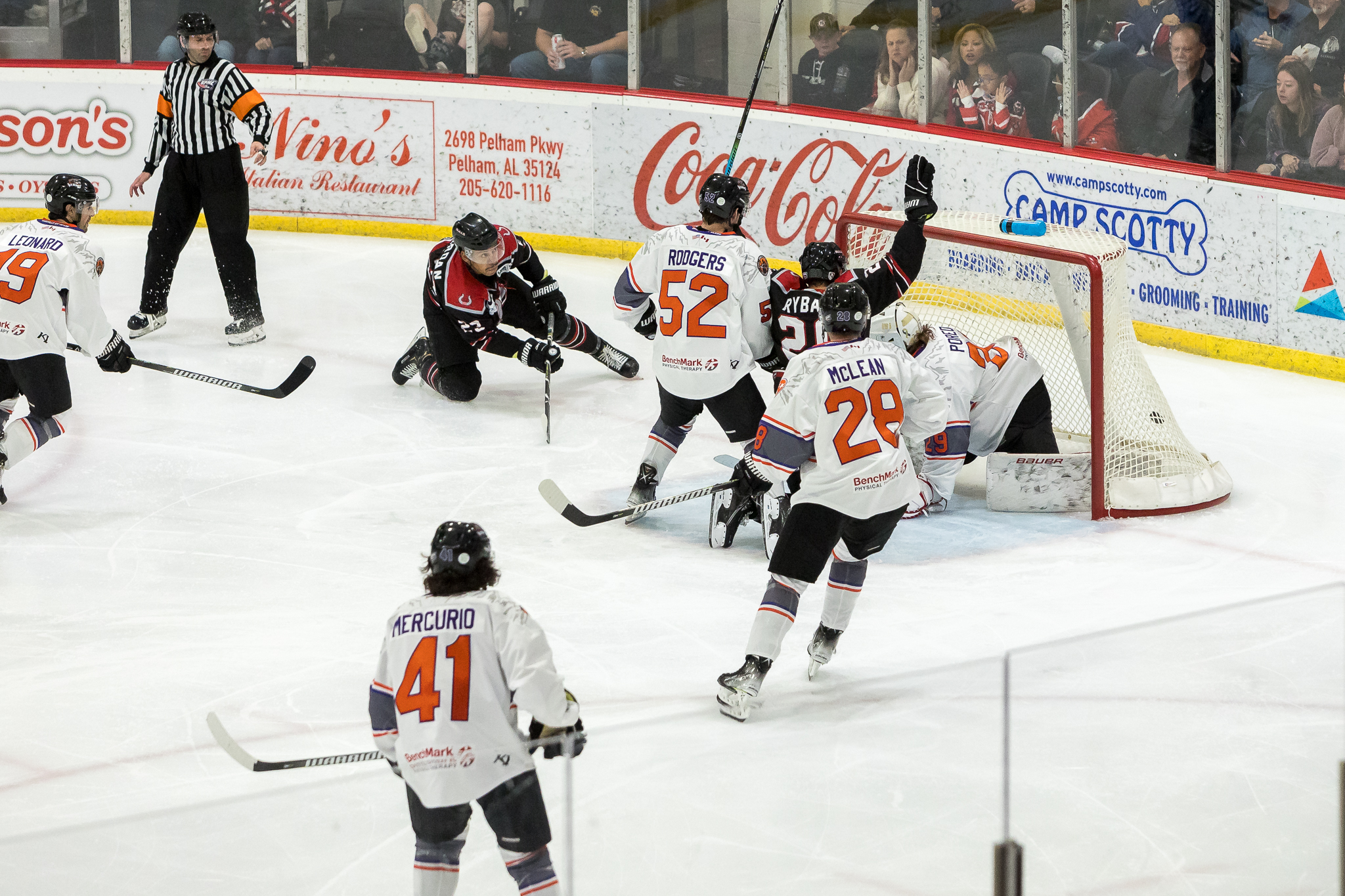 PELHAM, Ala- The Birmingham Bulls managed to escape the weekend with two points but still have yet to get into the win column in this early season. The Bulls fell in their home opener to the Ice Bears in overtime on Friday night 3-2 and then went into Evansville on Saturday night to face the Thunderbolts 4-3 in overtime.

The Birmingham Bulls penalty bug continued to haunt them throughout Friday night at the home opener against the Knoxville Ice Bears. The first period featured five penalties which converted to 13 minutes in the box.

However, the Bulls did have some bright spots during the home opener, and one of those is that Russel Jordan is back and is playing excellent hockey for the team. He scored both goals for the Bulls against the Ice Bears and had the go-ahead goal until the Ice Bears Andrew McLean tied things up with only six seconds remaining in the third period.

That goal came as the Ice Bears were playing 6-on-4 hockey because of a very costly penalty by David Nippard for spearing with 2:37 remaining in the game. Nippard was given a game misconduct, and the sentence was a five-minute major. Since the penalty was a major penalty, the Ice Bears would stay on the powerplay heading into overtime. It took 2:16 seconds for Andrew Bellant to beat Austin Lotz and score the Ice Bears third powerplay goal of the night and the game-winner.

There was some good to come out of Friday night’s overtime loss. Jordan looks like he didn’t miss a beat sitting out last season, and Lotz was standing on his head all night in the net, stopping 39 out of 42 shots. However, Friday night’s loss has a straightforward explanation as to why it happened. That would be undisciplined play resulting in 41 penalty minutes on the night.

Saturday night, despite the loss, was a much better game by the Bulls despite losing a heartbreaker in overtime. The night started out with Jordan picking up where he left off the night before and feeding Houston Wilson a great pass to put the Bulls up early in the first period. The Bulls went into the locker room feeling good and up 2-0. The most significant improvement was the lack of penalties; without the fight between Jordan and Zane Jones, Birmingham only had two penalties which were matched by the two penalties from Evansville.

The second period was a whole different story, though, in the game. Evansville came out looking like the team from opening weekend and tied the game up at two goals apiece. There was no need to panic in the locker room as the Bulls were still well in the game, and they were only called for one penalty in the second.

The third period came around, and both teams were buzzing, looking for a way to get that all-important go-ahead goal. Austin Plevy of the Thunderbolts was the one that found a way to put the Bolts up at the 6:02 mark in the third. Still, even being behind by one goal, the Bulls maintained their discipline and played hard through the third. Who other than Jordan would come through to tie things up in a crazy scramble in front of the net with 38 seconds remaining in the 3rd. The goal completed the Gordie Howe hat trick for Jordan and, more importantly, tied the game up and sent it into overtime. For the first time this year, the Bulls went into overtime at full strength, which was a huge plus. Birmingham had its fair share of chances, but again it just wasn’t their night, and 2:15 into the extra period, Cameron Cook beat Hayden Stewart, and the Thunderbolts were victorious.

Despite the loss, the defeat featured a Birmingham team that we had not seen yet this year. It was a focused, disciplined, and determined team. 13 penalty minutes were a lot better than the 41 the night before. The team never quit despite being down late in the game. Another thing the team and fans alike can be happy about is that this team has two rock-solid goaltenders in Lotz and Hayden Stewart. Stewart stopped 31/35 shots against the Bolts and was one of the big reasons the game was only a one-goal game late in the third.

“My message (Friday) was the exact opposite of what we did,” Bulls head coach Craig Simchuk said. “We knew the first two games this season penalties killed us, and it was stupid, just stupid mistakes.”

The team appeared to get the message on Saturday.

Maybe it was on the long 6-hour bus trip to Evansville or something that may have been said in the locker room after the game Friday night, because Saturday was a much more disciplined team.

We saw that this team will be able to contend with anyone in the league if it stays on this path.

Three Stars For The Weekend

3rd Star: Hayden Stewart who kept the Bulls in the game late Saturday night, stopping 31-of-35 shots coming up with some huge saves late in the third.

2nd Star: Austin Lotz, who, despite letting in in three goals which were all power-play goals, stopped 39-of-42 shots and was the reason this game was only a one-goal loss instead of a seven-goal loss.

1st Star:  Russel Jordan, who ended the weekend with 4 points (3g, 1a) and was just clutch for the team when it needed scoring.

Birmingham will look to continue to build off the positives from this weekend as it gets to spend next weekend at home playing Roanoke on Friday night and Pensacola Saturday night in Pelham at the Pelham Civic Center. Both the Rail Yard Dawgs and the Bulls will be looking for their first win of the season Friday night so expect both teams to come out hungry and ready to play.