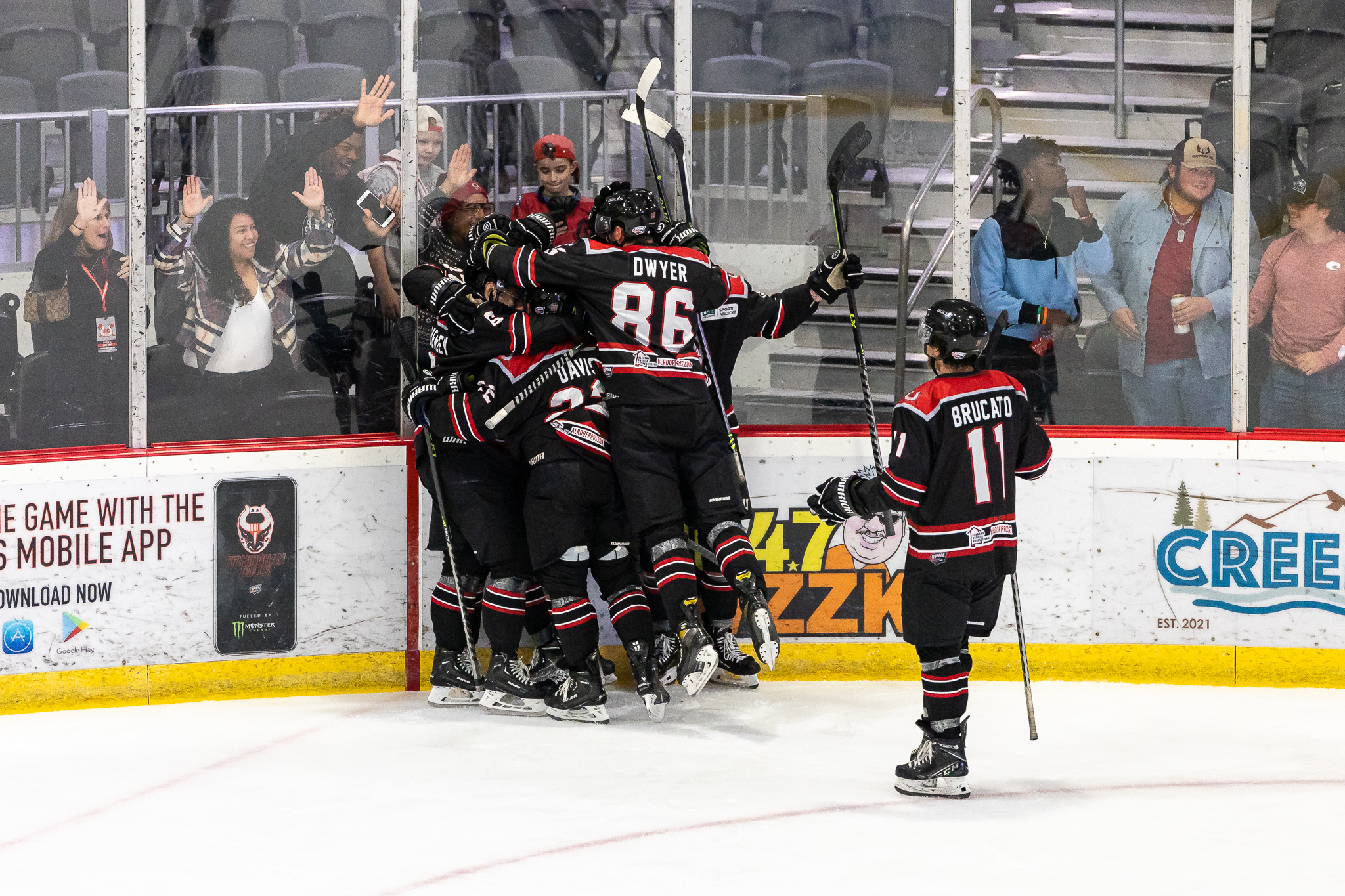 PELHAM, Ala. – The Birmingham Bulls came out of the weekend with four points after sweeping the Evansville Thunderbolts at home on Friday and Saturday night. Six possible points were available, but unplayable ice conditions in Macon prevented Thursday night’s game against the Mayhem from happening. The Bulls took care of business in overtime Friday night in a 6-5 victory over the Thunderbolts. Saturday night was not as close of a battle as the Bulls took down the Bolts 4-2.

Birmingham welcomed the Thunderbolts into the Pelham Civic Center this past Friday night for the first time this season. The game started with a scary moment when just three seconds in, Evansville’s Matthew Hobbs laid a huge center-ice hit on Birmingham’s Matt Wiesner. Wiesner had to be helped off the ice and go through concussion protocol, and he would not return to the game. Hobbs was not penalized then, but the Southern Professional Hockey League announced a suspension on Saturday, with further review forthcoming.

Shortly thereafter, the Bulls got the scoring going when rookie sensation Mike Gillespie beat Evansville goaltender Zane Steeves. A few moments later, Birmingham found itself on the power play. Unfortunately for the Bulls, Evansville got a shorthanded goal and tied things up. Late in the period, Birmingham captain Mike Davis gave the Bulls the lead back on the power play, and the Bulls took a one-goal lead into the locker room after one. 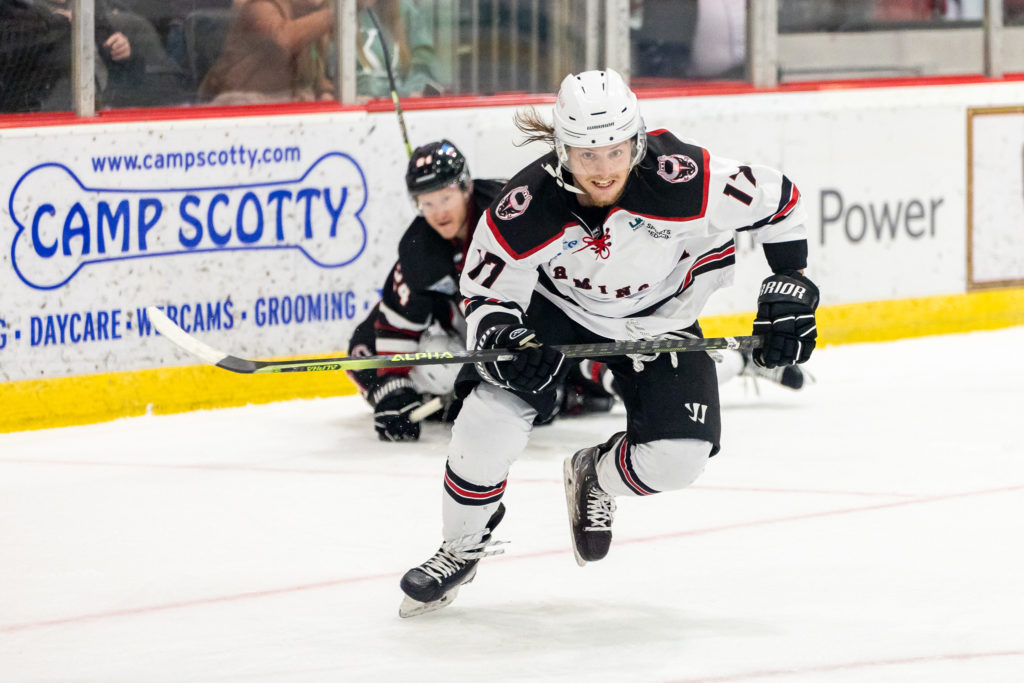 Birmingham came out for the third period in full force. They outshot the Bolts 12-6 in the final period of regulation, and the third-ranked power play found a way to tie things up. Jordan Martin was the guy to score the goal that sent the game to overtime when he took a no-look pass from Davis in front of the net and sent a one-timer flying by Zane Steeves.

For the first time this season, the Bulls were looking at overtime. Evansville had a huge chance that went just wide of the net 20 seconds into the extra period. It was all Bulls after that chance. They controlled possession for most of the overtime period. With 2:14 remaining, Davis found Jake Pappalardo coming across the slot, and Pappalardo made the Thunderbolts pay with a quick shot beating Steeves high on the glove side. After edging the Thunderbolts in overtime on Friday night, the stage was set for another great showdown between the two teams. Birmingham looked more like the team we had seen so far this year and came out firing on all cylinders. They outshot Evansville 26-8 in the first period. Davis got the scoring going when Pappalardo took a shot, and the rebound bounced right to Davis in the high slot. Evansville did not wait long to answer when Brendan Harrogate and Ferraro were all alone in front of Bulls goaltender Hayden Stewart. Harrogate dished the puck over to Ferraro, and it was a tie game.

Less than two minutes later, the Bulls were back on top. The goal came in an odd fashion. Zac Masson was trying to dump the puck into the Bull’s offensive zone, and it bounced off an Evansville defender right to Pappalardo’s stick. Pappalardo skated in, taking a shot from the left face-off circle and beating Perry for his second goal of the weekend. 2-1 was the score heading into the second period. 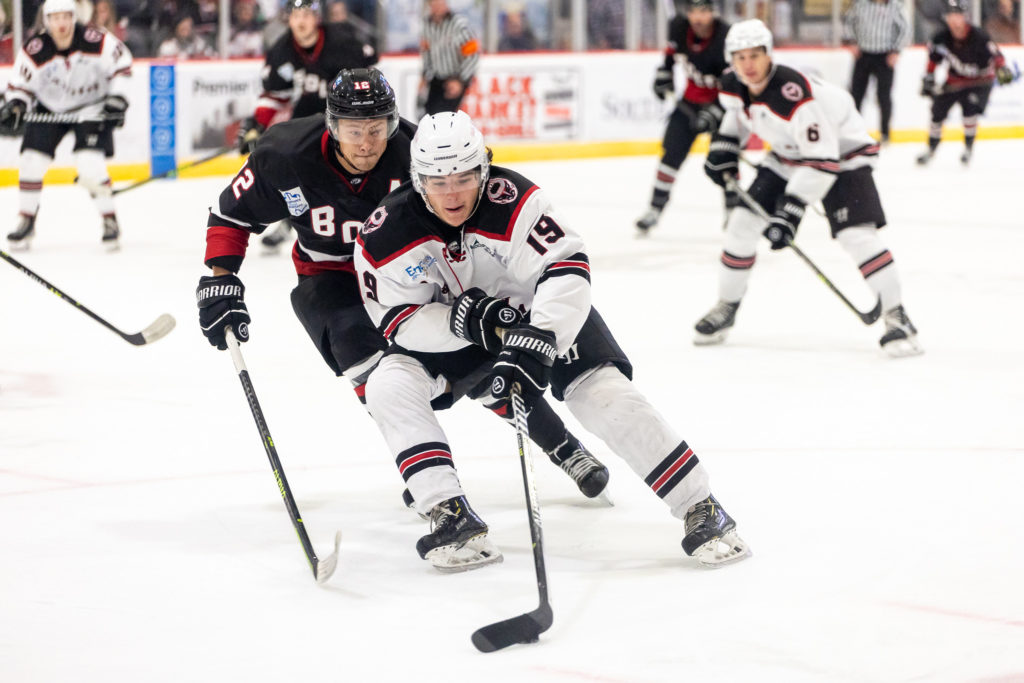 The second period was about as tough of a period as we had seen all weekend from the two teams. Late in the period, the Bull’s top-ranked penalty kill was put to the test when Jonathan Pace went to the box for holding. However, it was not the Thunderbolts that we saw capitalize on the man advantage. Instead, it was once again Pappalardo scoring a short-handed goal for Birmingham. The Bull’s penalty kill unit rushed into the offensive zone, and Nick Minerva took a shot from the near boards. Pappalardo tipped the puck, which rolled in, giving Birmingham a two-goal lead.

In the closing minutes of the period, Gillespie added another goal for Birmingham. He fired a one-timer from the slot giving the Bulls a commanding three-goal lead heading into the third. Evansville would add a powerplay goal in the third period from Cook, but the lead was too much to overcome for the Thunderbolts, and the Bulls finished off the weekend sweep against the number two team in the league standings. Birmingham will head on the road to face the Huntsville Havoc on Thanksgiving night at Propst Arena. After that, the team will hop on the bus and head to Danville for a pair of games against the Vermilion County Bobcats on Friday and Saturday night.