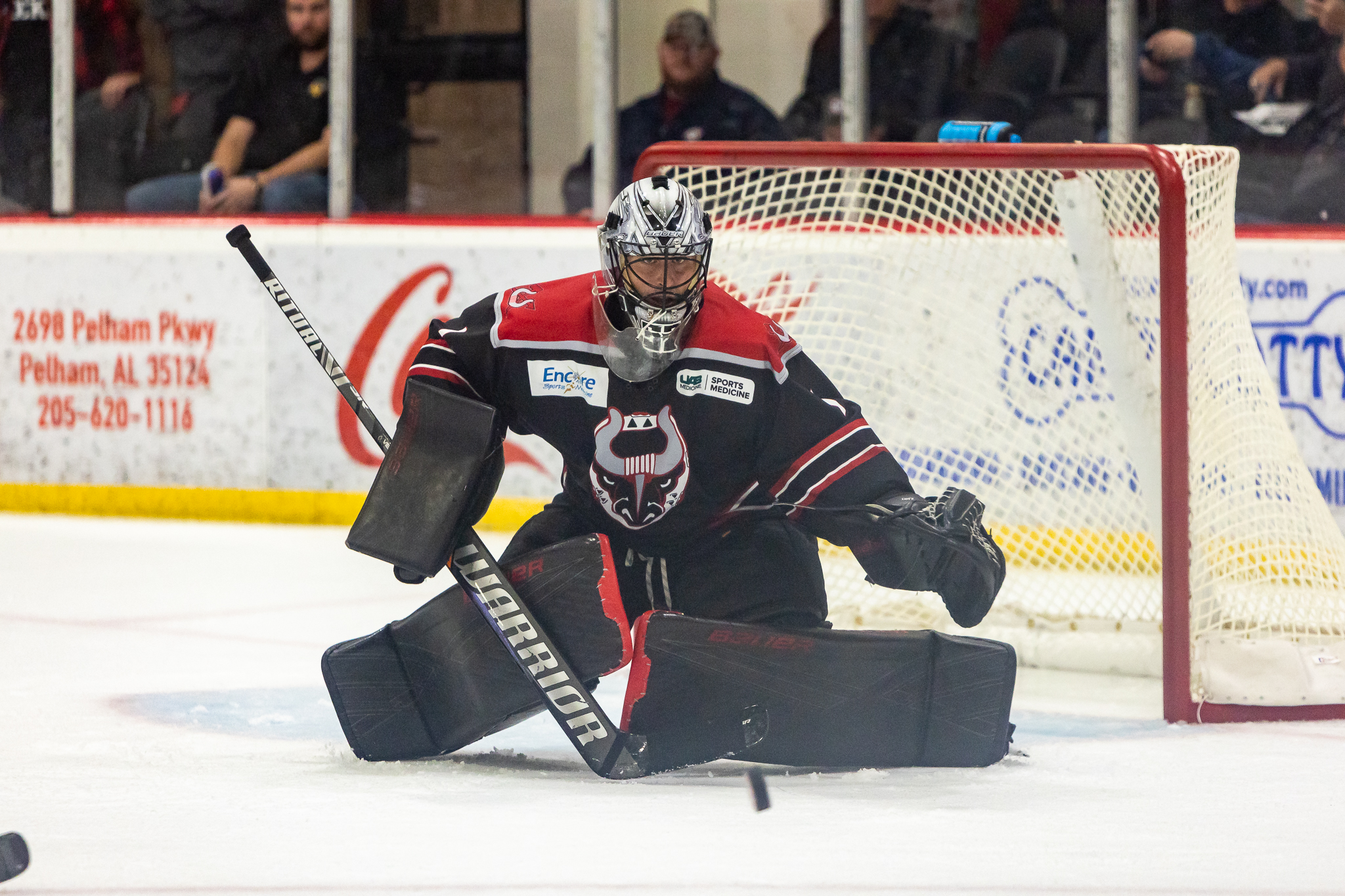 Birmingham Takes Round Six in “Battle for ‘Bama”

After being shut out 3-0 in their own barn, the Bulls looked to exact revenge in Huntsville for this round of the “Battle for ‘Bama.”

Birmingham Takes Round Six in “Battle for ‘Bama”

HUNTSVILLE, Ala. – For the third time in as many nights, the Birmingham Bulls took to the ice. This time it was a rematch of the Friday matchup against the Huntsville Havoc. After being shut out 3-0 in their own barn, the Bulls looked to exact revenge in Huntsville for this round of the “Battle for ‘Bama.” They would do exactly that in a 5-2 victory that didn’t come easy, despite the final score.

Huntsville came out full of energy, and it didn’t take them long to find the back of the net. Who other than former Bull Jacob Barber to get the opening goal either? Huntsville’s Rob Darrar sent a puck across the ice to Barber in the right faceoff circle. Barber took the shot and beat Austin Lotz short side, giving the Havoc an early lead just 2:08 into the period.

Unlike Friday night, the Bulls didn’t let this one define the game. Instead, just under five minutes later, the Bulls struck back. This goal came when Alex Cohen found Bulls defensemen Stephan Alvo patiently waiting for the puck at the point. Alvo took the pass and sent a slap shot, ripping past Zane Steeves to tie things up at one goal apiece.

The Bulls weren’t done yet in the first period, and at the 10:56 mark, Jake Pappalardo struck gold. Pappalardo sent a wrist shot from inside the right circle, and the puck beat Steeves on the glove side. This gave the Bulls their first lead of the night and their first lead against the Havoc all weekend.

Both teams would have to kill off minor penalties later in the period, and both teams’ penalty kill units were up to the task. The Bulls headed into the locker room with a one-goal lead and feeling good about themselves, especially after Lotz stopped 15 of 16 shots, including some huge saves to close out the period.

Huntsville started the second period much like they did the first period. The Havoc tied things up 1:46 into the middle frame when another former Bull, Sam Williams, fired a shot from the blue line into traffic, and by the time Lotz saw the puck, it was already in the back of the net. The Havoc, at this point, were outshooting the Bulls 20-8, and it looked like they had no plans of taking their foot off the throttle.

The Bulls would have to kill off a penalty later in the period, and once again, the Bulls’ penalty kill unit was up to the challenge. Huntsville also faced a short-handed situation just past the halfway point of the period when Dominick Procopio was caught cross-checking. The Bulls went to work on the powerplay, and it was the second powerplay unit that would shine in this one. Pappalardo skated in from the point and snapped a shot in on Steeves that would beat him on the glove hand, giving Pappalardo his second of the night. The Bulls took back the lead despite still being outshot 25-15.

With 1:49 remaining, the Bulls showed they still had more in the tank despite being on their third game in three nights. David Nippard moved in on Steeves after collecting a pass from Matthew Hobbs. Nippard used some slick stickhandling to get around a Havoc defender and then dropped to one knee to shoot up and over Zane Steeves shoulder. This was Nippard’s third goal in two nights, and more importantly, it gave the Bulls a two-goal lead heading into the third period.

The third period didn’t start off with scoring like the previous two, but it was not short of excitement by any means. Both teams’ penalty kill units had to go to work early on, and both units did precisely what they needed to keep the score the same. With 4:38 remaining, Havoc head coach Glenn Detulleo took a page out of Patrick Roy’s playbook and pulled Steeves. The bold move paid off somewhat early on when the Bulls iced the puck and, on the ensuing faceoff, couldn’t get things going and were called for a delay of game penalty. This gave the Havoc a six on four power-play, with Steeves still on the bench. With 1:17 remaining, the Havoc scored what they thought was a goal, but it was called off. With 21 seconds remaining in the game and Steeves still on the bench, Birmingham’s Alex Cohen took advantage of the empty net and sent the puck in to seal the deal for the Bulls.

After the game, head coach Craig Simchuk had this to say about his team’s play:

“So happy for the guys. They showed a lot of adversity and battled hard for three games. They found a way to win and everyone did their job.”

Huntsville maintains a 4-2 lead in the “Battle for ‘Bama,” with two meetings remaining. Those will happen on the season’s final weekend in Pelham.

With Sunday’s victory, the Bulls have now pulled within nine points of the eighth and final playoff spot, held by the Evansville Thunderbolts. The Thunderbolts struggled over the weekend, dropping both of their games against the Quad City Storm.

Lotz collected his second win in a row, stopping 35 of 37 shots, and was a crucial piece to the win. Nippard’s goal was his third of the weekend and sixth of the season. The depth scoring is coming at the right time for the Bulls as they continue to make a push for the playoffs after having a very rough start to the season.