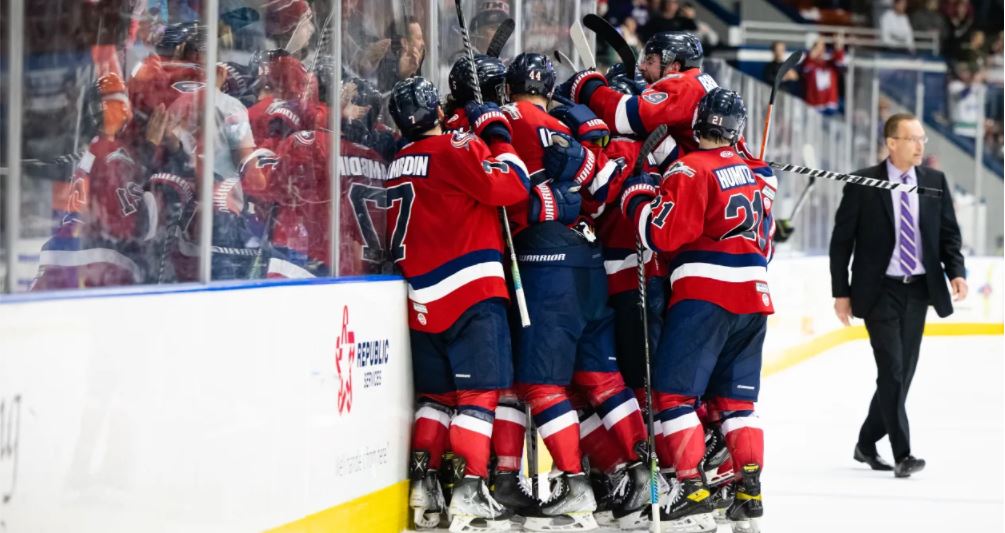 The Iowa Heartlanders got off the mat twice to force extra time, but Kalamazoo’s veteran group showed up at the right time Saturday night.

KALAMAZOO, Mich. – The Iowa Heartlanders twice rallied from deficits on Saturday evening, eventually forcing overtime. However, Kyle Blaney scored the game-winner with just 31 seconds left in the extra session to give the Kalamazoo Wings a 5-4 victory. It was the second straight night that Kalamazoo had defeated Iowa by that score. Blaney finished with a goal and two assists for Kalamazoo. Jake Smith had a goal and an assist for Iowa.

Iowa took the lead 3:28 into the contest. Bryce Misley passed the puck to Luke Nogard at the far post. He gained control before pushing a backhander past Trevor Gorsuch for his sixth goal of the season.

Kalamazoo was down early, but they responded with three unanswered tallies to take a two-goal lead heading into the first intermission. Matheson Iacopelli, who recorded a hat trick on Friday evening, tied the score at 6:26 with his 15th goal of the year. The Wings were doing a great job of controlling the puck inside the Iowa zone. Andrew DeBrincat moved down the right side of the slot. As he approached the net, he fed the puck to Iacopelli, who buried the one-timer to tie the score.

Just after the 11-minute mark, Justin Taylor gave the Wings the lead. Olivier LeBlanc gained control the puck near the Heartlanders blueline. He sped down along the boards looking like he was going to go behind the net, but before doing so he passed it out in front to Taylor who buried a one-timer for his 20th goal of the year.

Kalamazoo closed out the first period scoring when Tanner Sorensen netted his 16th goal of the year with 3:14 left in the frame. With the Wings on the power-play, Taylor blasted a shot from the right face-off circle that Iowa netminder Hunter Jones saved, but Sorensen gathered in the rebound, stuffing it in to make it 3-1.

The Heartlanders responded with two goals in the second frame to tie the score. Smith cut the Iowa deficit to one with his 21st goal of the season just 41 seconds into the period. Zach White carried the puck just inside the Kalamazoo blueline before dropping it to Smith. He made a nice move down the slot, looking like he was going to go to the left post, but then came back to the far post, getting Gorsuch out of position before putting in the wrist shot to make it 3-2.

With 1:43 left in the period, Kris Bennett tied the score with his 29th tally of the year. Iowa created a turnover inside the Kalamazoo end and were able to control the puck. The puck was moved back to the point where Riese Zmolek took a wrist shot that Bennett redirected past Gorsuch to tie the score at three heading into the second intermission.

In the third period, each team added a goal. Logan Lambdin gave the Wings back the lead at 2:59. With Iowa on the power-play, Tyler Rockwell stole the puck at his own blueline, then found Blaney streaking through the neutral zone. Blaney moved in on Jones on a partial breakaway. As he approached the net, he passed the puck to Lambdin who was trailing the play. Lambdin buried a one-timer for his 24th goal to make it 4-3.

Iowa put the pressure trying to get the equalizer, but Gorsuch made a number of big saves to keep his team on top. However, a hustle play enabled the Heartlanders to tie the score. Adrien Beraldo fired a puck from his own blue line that bounced off Gorsuch’s stick. Connor Russell raced in, swatting at the rebound, but it was knocked down. However, the puck moved to the opposite side of the net where Kaid Oliver put it in to tie the score at four.

Kalamazoo had the better of the chances in the extra session, but it was looking like this contest was headed for an shootout. That would not be the case as Blaney delivered the game-winner with 31 seconds left in OT. Iacopelli gained control of the puck behind his own end, then moved out, leading a 2-on-1 rush through the neutral zone and into the Heartlanders end. He moved down the slot, making the pass to Blaney who corralled the puck at the left faceoff circle, then fired a wrist shot that beat Jones to the glove side with the game-winner.

Despite suffering the loss, Iowa (26-25-8) still earned a point, tying them with Kalamazoo with 60 points. The Wings have played two fewer games.

The Heartlanders return home where they will play the Fort Wayne Komets on Wednesday. The puck drops at 7:00.