Blast from the Past: Familiar Faces Returning to Adirondack

The team hinted at multiple player signings in their social media posts, encouraging fans to attend a signing event

Blast from the Past: Familiar Faces Returning to Adirondack

GLENS FALLS, N.Y. – After COVID-19 shortened the 2019-20 season and forced the entire North Division to cancel their 2020-21 season, the Adirondack Thunder decided to start off their 2021-22 offseason with a bang.  In years past, the team had slowly introduced players one at a time, spacing their signing announcements throughout the summer.  This year was a little different.

The team hinted at multiple player signings in their social media posts, encouraging fans to attend a signing event to “find out who will be our first signed players” and including a graphic showing the silhouettes of three players. 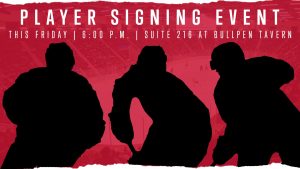 Sure enough, the Thunder announced three players right out of the gate, and all three are well-known to Adirondack fans.

First up was veteran forward Shane Harper, who played parts of four seasons in Glens Falls for the Adirondack Phantoms of the AHL.  Harper had seen action in the ECHL (63 games), AHL (398 games), and NHL (14 games) before heading to Europe, where he has played the last four seasons (one season in the KHL and three in Sweden). Harper averages more than a point-per-game in his ECHL career, with 72 points (36G, 36A) in 63 contests.

Last but not least was Rob Bordson, another veteran forward.  Bordson had spent parts of five seasons in Glens Falls, four with the Phantoms and one with the Thunder.  He has appeared in 106 games in the ECHL, 380 in the AHL, and 124 in various European leagues. Last season, with the Kansas City Mavericks, Bordson served as team captain, posting 50 points (17G, 33A) in 59 games.

For both Harper and MacArthur, coming “home” was a no-brainer.  Harper currently lives here with his family; MacArthur is from nearby Clifton Park.

Harper: “I had a good career over in Europe, but it was time.  I have a one-year-old daughter now, and this is where we come home in the summer.”

In a video message, “Mac” had this to say to the fans:

“My family and I are super pumped to head back upstate to the 518 and run it back once again with the Adirondack Thunder.  Get your cowbells, get your Thunder sticks ready, let’s blow the roof off that sucker on the 23rd of October.”

Keep tabs on all the signings in the ECHL this offseason by checking out our ECHL Transactions page! Visit https://fieldpasshockey.com/2021-echl-transactions/ for more information!

To view all of the latest offseason transactions, visit our ECHL Transactions page.