In the Southern Professional Hockey League’s lone game on Sunday, the Pensacola Ice Flyers and the Quad City Storm made sure it was intriguing. The Ice Flyers dominated play but took their only lead of the game with just seconds remaining in regulation. 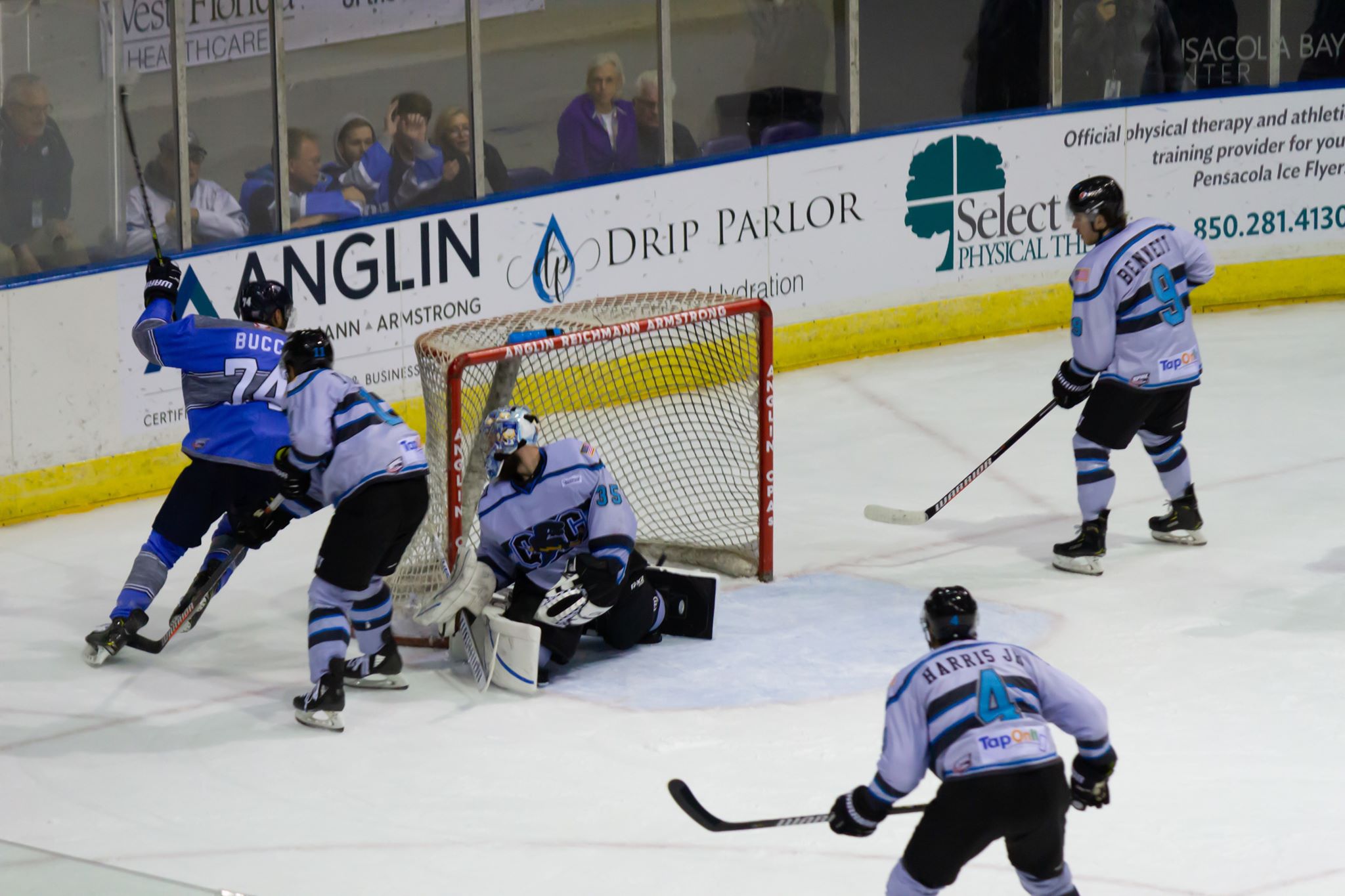 PENSACOLA, Fla. – In the Southern Professional Hockey League’s lone game on Sunday, the Pensacola Ice Flyers and the Quad City Storm made sure it was intriguing. The Ice Flyers dominated play but took their only lead of the game with just seconds remaining in regulation.
The period started a little choppy on both sides, but Pensacola eventually settled in and started to dominate the period. The Storm would strike first, however, when a pass from behind the net bounced off a body and past Ice Flyers goalie Chase Perry. Dakota Klecha got credit for the goal. That started a flurry of goals that continued when the Storm went up 2-0 less than a minute later as Shane Bennett capitalized on a scramble in front of the net. Things started turning only 10 seconds later when Ryan Marcuz and Garrett Milan skated in with the puck right off the faceoff. Milan ripped a quick shot that Quad City’s Peter Di Salvo couldn’t stop. The game got back to even footing with 1:54 left in the period. Tommaso Bucci fed a beautiful pass to Eddie Matsushima as he was flying down the slot. Patrick Megannety picked up the other assist on Matsushima’s one-timer.
The second period seemed to continue the trend of quick goals. Quad City regained the lead when Taylor Pryce flew down the left side and fired a backhander that caught Perry off guard and slipped through his five-hole just 1:41 into the first. Then, less than a minute and a half later, things were evened up again when Michael Ederer netted his first professional goal with assists going to Milan and Kyle Froese.
The Ice Flyers continued to push and control play, but they would once again find themselves on the losing end of the scoreline when Klecha netted his second of the night with 9:15 remaining in regulation. Pensacola never looked worried and stressed, and they continued to play their game. Their patience paid off when Meirs Moore waited for his opportunity and found twine with 2:10 remaining.
Speaking of taking advantage of opportunities, the Ice Flyers chose an opportune time to secure their first lead of the game. Matsushima carried the puck into the Pensacola offensive zone and elected to take the shot himself rather than passing to Bucci. His shot went wide, but the puck bounced right out to Bucci to the right of Di Salvo’s crease. Bucci took a swing at it and hoped for the best. It worked out and the Ice Flyers finally led with 13.6 seconds left.

“I took a baseball swing,” stated Bucci. “I saw the puck hit the back of the boards and I was like, ‘oh come on, come on, come on.’ I saw it bounce out and I just closed my eyes and hoped for the best.”

He may not have seen his shot, but he did see the result. He stated he opened his eyes just in time to see the puck as it bounced off Di Salvo and into the net.
After the game, Aldoff was in a jovial mood, thanks to the win. He said he told the team that if they keep playing these nail biter games, his hairline was going to continue receding.
When it was mentioned to Aldoff that Bucci closed his eyes, he quipped, “If he can bat more in closing his eyes, then go right ahead.”
Aldoff also viewed the game as a learning experience.

“These are games, this time of year, that actually make a team grow. It’s still early in the year but they’re putting trust in one another and getting it done. Those are good positive steps.”