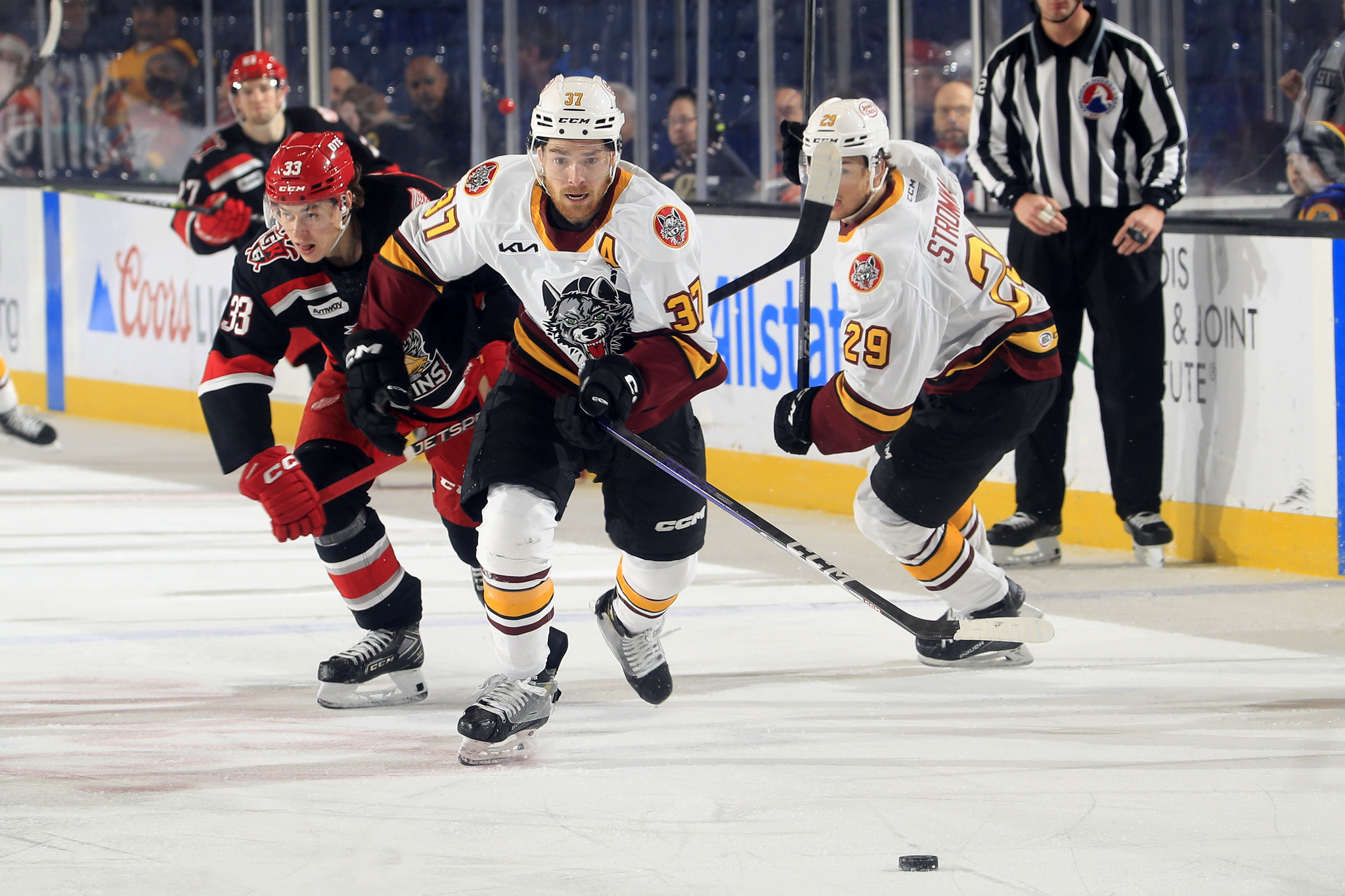 Josh Melnick goes in after the puck on the back check (Photo courtesy: Ross Dettman)

ROSEMONT, Ill. – Beneath the shadow of the threatening snowstorm coming through the heart of the Midwest, there was still a hockey game to be played on Thursday night. The Chicago Wolves played host to the Grand Rapids Griffins – two teams representing the basement of the Central Division and both in desperate need of points.

In the middle of a three-games-in-three-days set, the Wolves turned to Cale Morris in net. Starting for the Griffins was 2021 first-round selection Sebastian Cossa, fresh off his callup from the ECHL’s Toledo Walleye earlier this week.

The goal light flashed early and often, and just when everyone expected to close the book on a Wolves’ victory, the Griffins stormed back with a flurry of offensive firepower to secure an 8-7 win in overtime that left fans, players, coaches, and everyone observing asking the same question: what just happened?

It took just over two minutes of game action to get the first goal of the game, and on the first shot to boot: a sign of things to come. The pressure from the Wolves’ forecheck created a turnover to Griffin Mendel, who wired a wrist shot past Cossa late to react to the chance.

The Wolves were far from done – with Griffins captain Brian Lashoff sitting for a cross-check, the power play had a chance to shine. After moving the puck around the outside, William Lagesson put a shot on Cossa, who got a lot of the shot but not enough for Noel Gunler to tap it home from behind the netminder and extend the Wolves’ lead to 2-0.

The Griffins, unable to get and keep the puck on their stick throughout the first, took another penalty to remain hemmed in their own zone. Their first real chance of the period came on an odd-man rush going the other way featuring Austin Czarnik and Alex Chiasson, who finished the pass from Czarnik past Morris to cut the Wolves’ lead in half.

Momentum for the Griffins, right?

Wrong. Thirty seconds later a miscommunication with Cossa and his defender turned into a turnover finished off by Joseph LaBate into the back of the net and a 3-1 Wolves advantage. A minute later and consecutive penalties from Tyler Spezia and Albert Johansson really put the Griffins behind the eight ball, and it was Gunler on the doorstep for his second of the night and a 4-1 Wolves’ lead.

But it’s about to get worse.

It only took another minute for the Wolves to pile on. Vasili Ponomarev cut through the Griffins’ defenders with shades of Mario Lemieux to feed Tuukka Tieksola unmarked in the slot for another power play marker and a 5-1 Chicago score. By this point, Allstate Arena had run out of fireworks to set off after a goal scored – at 14:54 of the first period. Not even fifteen minutes of game action and the lowest scoring team in the Central Division was pouring it on.

Sweet dish from Ponomarev to set up Tuukka🤮 pic.twitter.com/dDVXdMtgFU

A minor penalty to Mendel put the Griffins on the man advantage, putting a Griffins unit with plenty of firepower in a position to strike. Czarnik from the top of the key set up Danny O’Regan – playing his first game with Grand Rapids following a trade earlier this week – who clapped a shot from the high slot that beat Morris and drew the Griffins into a 5-2 score.

Before it could start to look any better for Grand Rapids, thirty seconds later the Wolves struck again with Zack Hayes taking a feed from Gunler and firing a wrist shot from the top of the circle that Cossa assuredly would like to have back.

Both teams managed to skate through the last 2:30 of the period without another goal, and the Wolves went into intermission feeling probably the best about their game as they had all season with a commanding 6-2 lead.

The Griffins began the period with a change in net: Jussi Olkinuora stepped in relief of Cossa, who made seven saves on thirteen shots in his first period since being called up from the Walleye. Immediately, you could see a difference in the Griffins’ game to start out the period, and the hard work forced a Max Lajoie penalty just a minute into the middle frame.

Chiasson, already establishing himself as a force on the Griffins power play just a handful of games into his season debut, took the feed from Czarnik at the side of the net and deflected it past Morris to bring them within three. The momentum was starting to creep as the Griffins began to pepper Morris and the Wolves really looked disinterested to play a game more than 20 minutes long.

That disinterest would bite them again – at the 8:44 mark, Eemil Viro put a puck towards the net that took a bounce right to Spezia at the side of the net unmarked, who had a wide open net to make this game 6-4. Suddenly, things got interesting in Allstate Arena.

The Griffins, with a shot advantage of 11-2 in the second period, had life heading into intermission in a game that, for all intents and purposes, should have been wrapped up a period ago.

The momentum would snowball into the third.

Just over a minute in and the Wolves looked to have reclaimed that momentum on the back of a Lajoie chance from the point that got past Olkinuora for a 7-4 lead.

The good vibes wouldn’t last long for the Wolves – a sloppy turnover at their own blue line gave a lane for Spezia to find O’Regan for a one timer that beat Morris and brought the Griffins back within striking distance at 7-5.

The Griffins’ forecheck continued to create havoc in the Wolves’ zone as they had done since the opening of the second period. The legs got rolling and this time it was O’Regan returning the favor to Spezia – not even ten minutes into the period and the Griffins were within one at 7-6.

Despite Grand Rapids’ pressure, the Wolves continued to hold on by the skin of their teeth and looked to maybe escape with a win. However, a late hooking call against Malte Stromwall put the Wolves on the powerplay, leaving the Wolves’ bench furious with the officials. The Griffins, deadly on the power play all night, struck when Steven Kampfer’s chance wasn’t collected by Morris allowing Joel L’Esperance to bury the rebound and miraculously tie this game at 7-7.

The Wolves were stunned. Snake bitten. Whatever metaphor there can be found, it wasn’t enough to adequately explain the body language of the team as they sulked their way back to the benches for overtime.

Luckily for the Wolves, their misery wouldn’t last long. 16 seconds into the extra frame, Czarnik took a lead pass from Kampfer on a two-on-one on Morris. The Wolves’ goaltender stopped the first shot, but Czarnik would put away the rebound to finish up the unbelievable comeback and an 8-7 victory for the visitors.

The Wolves host the Rockford IceHogs on Friday night at Allstate Arena at 7 PM CST, while the Griffins have an early start to their holiday due to the inclement weather rolling through the area that had their game against the Cleveland Monsters postponed until next month