Booster Club Dishes Out Taste Of Home For Mayhem

#SPHL | All season long the @MaconMayhem get a taste of home thanks to the hospitality of their booster club. @FPHMayhem shares more about how this group takes care of Mayhem players and staff

Booster Club Dishes Out Taste Of Home For Mayhem

MACON, Ga. – There aren’t many home games in the first two months of 2023 for the Macon Mayhem, who’ll host Knoxville next Sunday in just one of two contests on home ice through Feb. 24. But Macon, which plays at Pensacola next Monday, Friday, and Saturday, will be back home to face the Ice Bears on Feb. 24, will encounter one constant, win or lose.

That would be the team’s booster club, which extends an arm of southern hospitality when the Mayhem are at home and on the road.

Following 60 minutes of hockey, the focus of the Mayhem players and staff shifts from the ice and locker room to the nearby Monument Room at the Macon Coliseum, where tables and chairs are arranged across a space used to host banquets and receptions. The main attraction? Multiple tables lined up next to each other, filled with about 12-to-15 crock pots of food readied by the Macon Mayhem Booster Club. And there’s a type of food for all the players as they funnel through, ranging from meatballs, pasta, and more. 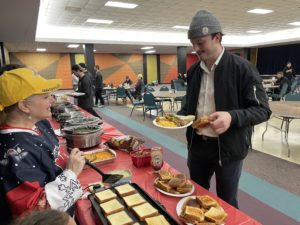 “Meatballs are an absolute favorite, we do them with different sauces, and they love them,” Karen Jones. President of the Mayhem Booster Club said. “Sometimes we’ll have things like mac and cheese, veggies and other things.”

And the food is prepped with the Mayhem players in mind, too, taking into account dietary needs such as players who may be on a vegetarian or gluten-free diet.

“We try to have something that meets all of their dietary needs,” Jones said.

But the post-game line of crock pots isn’t just for the Mayhem players. Following games, the room is filled by visiting players, coaches, and staff, too, giving them a nice hearty meal before loading on the bus to head out on a long bus ride. It also serves as a bit of a reunion, as it offers a chance for the booster club members to reconnect and catch up with former Macon players. Last month, for example, Jarrett Kup, now with Fayetteville, had a chance to chat with booster club members as his career includes a previous stop in Macon. 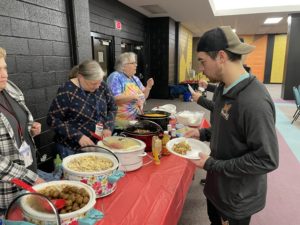 Providing post-game food for the visiting team actually goes back to the days of the Macon Whoopee, Jones says.

“The roles used to be that the home team was responsible for feeding the visiting team, that started back in the days of the Whoopee,” Jones said. “So when the team started back up, we just went back to doing what we did before. The guys on the team enjoy it and get a home-cooked meal.”

But the booster club’s role doesn’t end when the team is on the road, a place where the Mayhem is spending a good chunk of time right now. Instead of crock pots of food, bags of snacks for the road, called, ‘road trip bags” are prepped by booster club members for the players they sponsor for the season.

And there’s a rhyme and reason to what goes in those bags, too, as they are filled with items based on their snack and drink preferences for items such as cookies, chips, Gatorade, or Pedialyte.

“Each booster club member has a player, and what’s in the bag depends on how long the trip is. If it’s a trip to Peoria, it’ll be a lot bigger bag than if it’s to somewhere like Pensacola, which is usually a down-and-back trip,” Jones said. “When you sponsor a player, you get an idea of what they like and try to put some of those things in there.”

Home or away, booster club members provide a family away from home for many players that spend nearly half the year at least multiple states away from friends and family back home.

“Lots of sponsors try to get together with their players. You try to connect with them if you know their birthday is coming up, do a card or cake for them or get them food they might like,” Jones said. “We try to make them feel more at home, and if they need anything, try to provide that. It’s a chance for us to get to know players and also help them out. It’s a double advantage.”