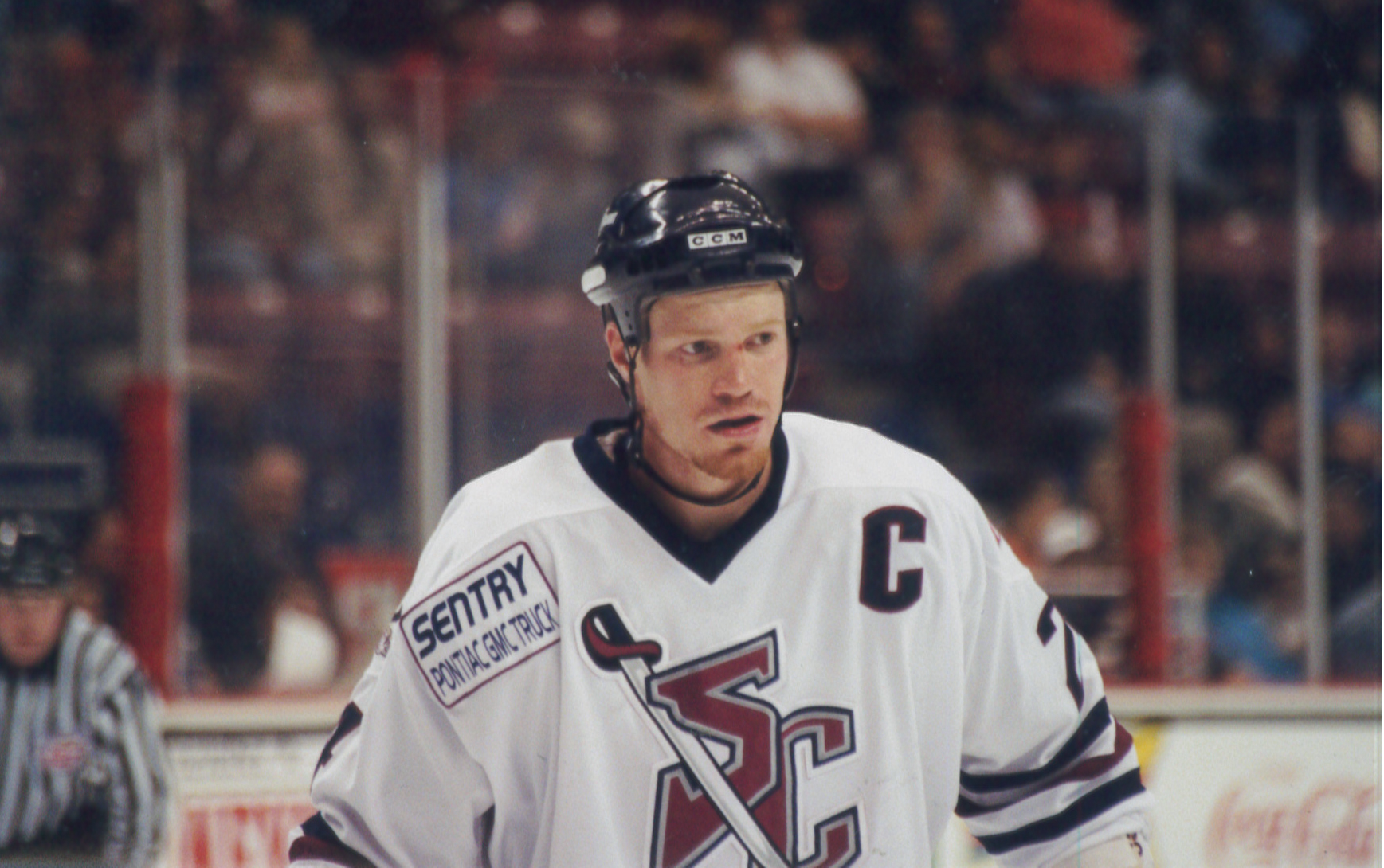 NORTH CHARLESTON, S.C. –  Today, Brett Marietti will become the sixth former South Carolina Stingray to be inducted into the ECHL Hall of Fame.

The Stingrays have been nominating Marietti for inclusion into the ECHL Hall of Fame for several years. The process can be grueling as only a few individuals, and usually, only two or three players, make it in each year. Rob Concannon, Brett’s roommate and linemate for five years, explained that the process teams go through to get a player selected is arduous. Teams send up perspective names to a committee at the ECHL headquarters that includes Patrick Kelly, among other titans in the ECHL’s rich history. The candidates for inclusion then have their careers reviewed by the committee to see if they meet the highly selective criteria for inclusion in the Hall of Fame. Then, the candidates are voted upon for acceptance and only the cream of the crop makes it. If a candidate is not selected, they can be re-nominated the next year. Teams can choose to change their nominee(s), or in the case of the Stingrays, keep putting forward a person they feel is still most deserving of the honor. 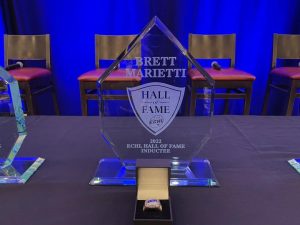 After multiple nominations, Brett Marietti will finally take his place among the greats of the ECHL including fellow former Stingrays, Jared Bednar, Dave Seitz, Jason Saal, Tom Nemeth, and Rod Taylor in the ECHL Hall of Fame.

The South Carolina Stingrays have had many quality players, and characters, in their lineup over the course of their history, but only a few have had the sustained impact of former team captain Brett Marietti. He was the early cornerstone of the Stingrays organization, playing for nine seasons (1994-2003) and serving as the team captain for all nine of those years. He also led the team to two ECHL Championships in a five-year span (1997 and 2001). He was a huge factor in the success of the Stingrays on and off of the ice and he helped cement the reputation of Charleston as a hockey town.

Marietti played junior hockey in Canada, suiting up for the London Knights for three years before turning pro. He played for one season in the AHL, for the Rochester Americans, before coming to Charleston in the fall of 1994. His impact was immediate and many would say that he never took a shift off until his final game for the Stingrays in 2003. He played in 550 regular season ECHL games, plus an additional 69 postseason contests, all for the South Carolina Stingrays.

During his nine seasons in Charleston, he was a monster on the scoresheet. He had 194 goals, 287 assists, and 1127 PIMs during the regular season. In the postseason, he scored an additional 30 goals, 32 assists, and 123 PIMs during his tenure in Charleston. The ECHL was a slightly different beast in the 1990s and early 2000s, but his seasonal averages of 21.5 goals, 31.8 assists, and 125 PIMs are more than impressive. Today, only the elite of the league can produce those numbers in a single season and none could sustain that production for nine years as Marietti did.

But Marietti was more than a bunch of numbers on a scoresheet. Concannon praised Marietti because, in his eyes, it was the things that didn’t show on the scoresheet that were the most important. It was his professional work ethic, ability to play through injuries and do the right things at the right time that drew players and fans to love Marietti. His leadership on the ice and in the locker room earned him the respect and admiration of his teammates and he forged lifelong bonds with many of his teammates.

Field Pass Hockey (FPH): When you came to Charleston, Brett had already been here for two years. What were your initial impressions of him?

Dave Seitz (DS): One of the things I remember vividly was getting here. I was sent down from Rochester, I had started playing the year there playing for John Tortotella, which was really awesome, and I came down here not knowing what to expect. I had just graduated from Clarkson University and was trying to chase my pro career. I get here and there’s an exhibition game in Charlotte. It was a scene out of Slapshot. 15 fights. Everyone trying to make the team. I remember watching Brett, the best player on both teams out there, moving the puck, taking shots, finishing checks, fighting guys, beating guys up. Watching him play was just one of those things that as rookie, looking for what to expect in the league, then playing my first exhibition game with him… It just made me realize what a special player Brett was. Someone who could just bring every single facet to the game. He does everything well. There’s nothing he’s not good at. As a rookie it really taught me how to come to the rink every day and being professional. And that’s one thing a lot of teams don’t have, that kind of leadership. That’s something Brett brought to our team each and every game for his entire career that I played with him.

FPH: You were inducted into the ECHL Hall of Fame in 2012, what are your thoughts on Brett’s induction this year?

DS: I’m extremely proud of him. I can’t believe it hasn’t happened sooner. If I were voting, it would have happened 10 years ago. When I think of Stingrays hockey and leadership and champions, I think of Brett Marietti. There’s a ton of great ECHL teams with skill but I know our team won those years because of Brett’s leadership. He was the captain and he taught us how to win. You can have great coaching, great goaltending, the most skilled team in the world; unless you have someone to teach you leadership and how to win and how to play the game right every single shift, which is what Brett did, that’s what made us successful. Anyone that’s played with Brett I think will tell you the same thing. It was an amazing thing to have him as our captain and leader.

FPH: I assume you guys still keep up with each other?

DS: We get together and watch some hockey games. We watch a lot of the late games because Jared Bednar coaches out West. So a lot of times if I get a night off, I’ll meet up with him and we’ll watch Bednar’s games together and we will send him text messages and stuff during the game and just fun stuff you do as friends. Supporting him and being able to watch him with Brett, and anytime I get to see Brett, it’s great. Watch hockey and tell Bednar stories from back when he was a player and how far he has come. He and I are just so proud of Jared and what he has been able to accomplish in his NHL career.

FPH: A lot has been said about Brett’s quiet leadership, that he wasn’t the kind of guy to get vocal on the bench or in the room but that he let his skills and his play speak for who he was.

DS: He led by example, he never really said that much. You just watched him play and every single shift he gave his best. It was stuff like that, where if you’re on the other team and do something wrong, you are going to pay the piper. He was there every single time. He showed what was right and wrong and what’s going to fly with us, with these Stingrays, and what you can and can’t do on the ice.

FPH: Marietti was linemates with Rob Concannon and those two were always near the top of the team scoring but Concannon always seemed to have more penalty minutes, which Rob has said that those were mostly misconducts. Did you often play on the same line with them?

DS: Brett never said anything, he would just punch you. Robbie would run his mouth and take a 10-minute and then say something to the ref and then get a game misconduct. It was awesome playing with both of those guys…Brett and I only touched the ice together on the power play, we’re both centerman. So we didn’t play together except for the power play and special teams. I wish one of us was a winger because I think we both would have scored a lot more having the other one on our side for seven years.

FPH: Obviously, winning two Kelly Cups with someone is special. Other than those two runs to the cup, do you have a favorite memory of Brett?

DS: My favorite Brett Marietti moment was in Louisiana, we had just beat them the year before in the Kelly Cup Finals (1997) and there was a lot of bad blood. We are on one of those big Southern trips where you are on the bus for 10-12 days. We were right in the middle of it. They hated us. We hated them. One of their guys had scored a goal and was trying to showboat right in front of our bench and Marietti came right across the bench and clotheslined him. It started a bench brawl. Everyone is fighting, goalies are fighting, referees are trying to break it up. 11,500 fans in Louisiana are going crazy, coaches yelling at each other trying to get the glass out between the benches because they wanted to kill each other. That guy was going to showboat in front of our bench and Brett wasn’t going to have it. Came across the bench and clotheslined him.

We were getting our next shift on the ice for the faceoff and so were they, so there were already 15 guys on the ice, then the rest of us jumped on which started the brawl and as soon as we got that one cleaned up, there was another bench brawl within five minutes. That’s my favorite Brett Marietti moment, that’s just the kind of player he was. If you’re going to do something wrong, you’re going to pay for it. It’s just one of those things, as soon as he clotheslined that guy, the whole team couldn’t wait to jump over the bench. 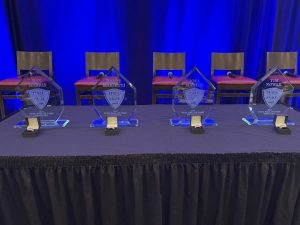 By all accounts, Brett Marietti was a special player not just to the fans in Charleston, but also to those he played with during his long tenure. Marietti will be joined by Ray Harris, Joel Martin, and Tim Nowak as the 14th class of the ECHL Hall of Fame this afternoon.

* Author’s note: Rob Concannon was interviewed for this story and gave some fantastic insight into Brett Marietti, the ECHL HOF process, the impact of ECHL HOF players like Marietti, Seitz, and Bednar have on the Stingrays organization and their enduring legacy on the game. Due to a technical mishap, his interview was lost and I was unable to directly quote him for this piece. Which is a shame because Rob had a fantastic story about his first impression of Brett that included a fantastic mid-90s mullet and jean shorts. Thanks to both Rob and Dave for taking time to talk about their teammate and friend for this article.*