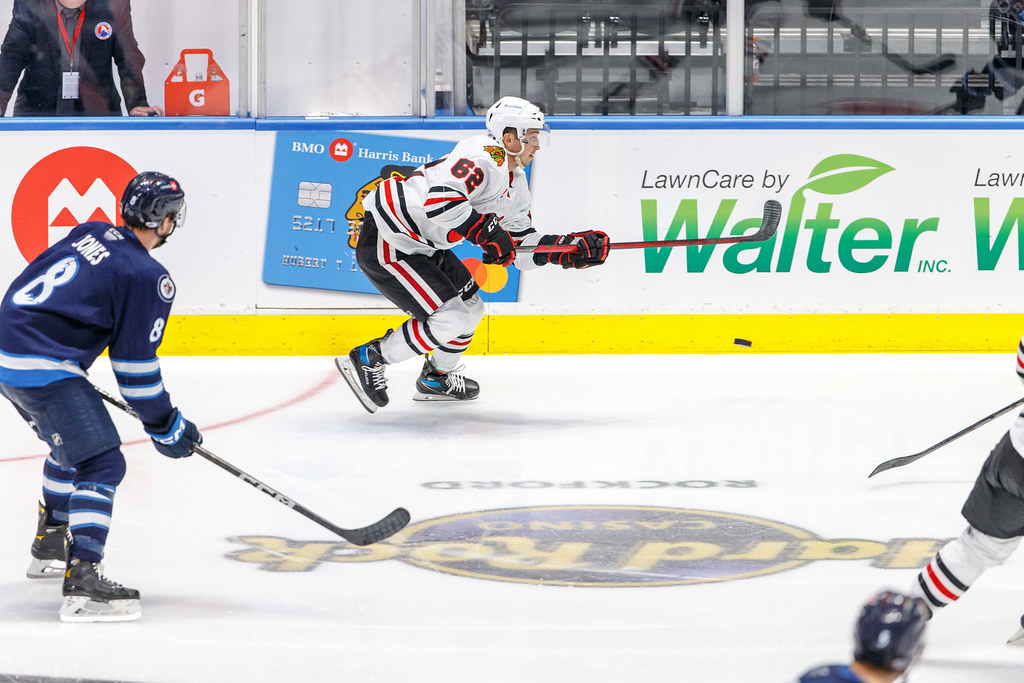 Seney Off To A Fast Start For IceHogs

Brett Seney is looking to build on a career-year with his new teammates in Rockford. (Photo by Todd Reicher/Rockford IceHogs)

Seney Off To A Fast Start For IceHogs

ROCKFORD, Ill.– The Rockford IceHogs brought in several players this offseason in hopes of beefing up their offensive output. Though Rockford has started the season 1-3, Brett Seney has been an addition that has made a difference on the scoresheet.

The 26-year old Seney is coming off a career-best 59 points (17 G, 42 A) last season with the Toronto Marlies. He’s begun his fifth full season in pro hockey with three goals in the IceHogs first four games. This includes his overtime game-winner October 15 in Manitoba.

“I think he’s been really good,” said Rockford head coach Anders Sorensen in the team’s media session on Tuesday. “He plays hard, he plays through guys, he skates. I thought he was a good fit with (Lukas) Reichel too. The speed between the two of them is kind of scary to watch.’

Reichel and David Gust have joined Seney on the Hogs most productive forward line. The trio have six of Rockford’s nine goals this season. Seney is looking for more consistency from his group, but doesn’t think it’s too far off.

“The flashes that we’ve had where we’ve played well as a line, we’re confident in each other to make the play when it’s there,” Seney said. “And when it’s not, you’ve got to put it in a good spot and work to get it back. I think that’s what’s been working.”

Originally a sixth-round selection by New Jersey in the 2015 NHL Draft, Seney spent four years at Merrimack College before signing with the Devils. He put together a 19-goal, 25-assist effort in 61 games in the COVID-shortened 2019-20 campaign. After a year with the Marlies, he signed with the Chicago Blackhawks in July.

“There’s so much opportunity, both at this level and the next level,” Seney said. “It’s just kind of finding that spot where you can fill in an help a team win, whether it’s down here or up in Chicago. Whatever you’ve got to do to help the team win and contribute. That’s why a lot of guys were so excited about coming to this organization.”

“I think it’s just playing fast,” he said. “I may not be a big guy, but it doesn’t matter who I’m going against. I’m going to try and win that battle and win that puck. When I do get the puck, I like to think I can make some plays, you know, when they’re there. Just supporting my teammates and trying to make the right play whenever I get the puck.”

Despite bringing in a host of veterans, Rockford is currently in a three-game losing streak after winning its opening tilt. The IceHogs host Chicago and Belleville over the weekend at the BMO Center. For Seney, the focus is ahead to this weekend, not back to the last one.

“You’ve obviously got to lean from your mistakes and find out what’s not working,” he said. “I think, right now, we take a lot of positives from last weekend.”

Seney stressed the importance of keeping perspective during this week of practice, despite the slow start.

“It’s such a long season,” Seney pointed out. “You’re going to have highs, you’re going to have lows. It would be easy to come to the rink today and everybody be in a bad mood and kind of rest on our laurels in a sense. A day like today, regroup; make sure we come together as a group. It’s our job at the end of the day, but you got to have fun with it. The more wins you have, the more fun you have, so (we’re) just trying to bring that into the room.”

Rockford drops the puck with the Wolves Friday night, followed by Belleville on Saturday. Start times both nights are at 7:00 p.m. CST.