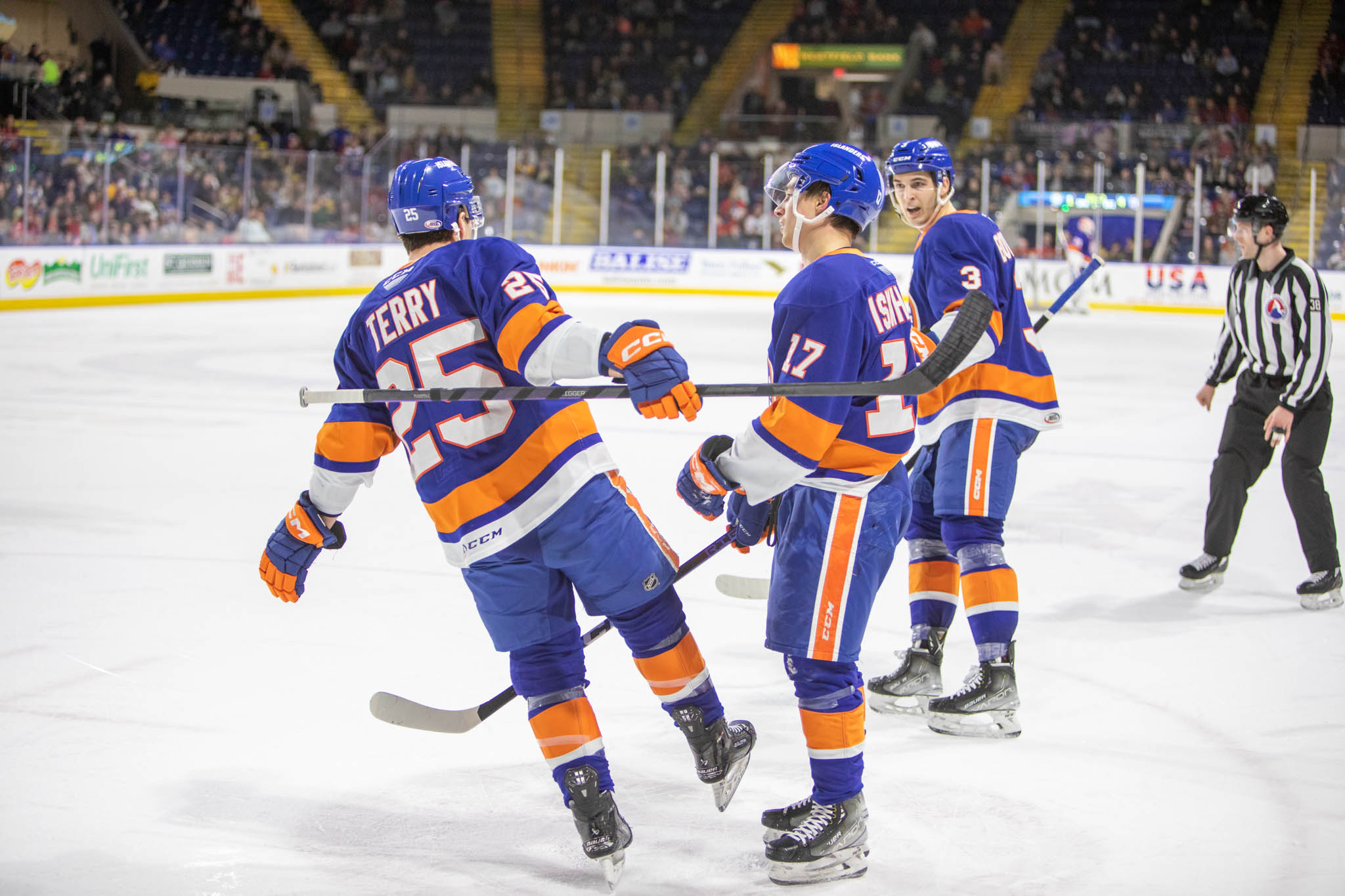 #AHL | Monday, @AHLIslanders spoiled the fun for their hosts, @ThunderbirdsAHL. @FPHBears has the recap

SPRINGFIELD, Mass. – It was an Atlantic Division clash at MassMutual Center with a good crowd in Springfield as the Thunderbirds played host to the Bridgeport Islanders. The Islanders slowed their losing skid recently and played a reversal card on the Thunderbirds, sending Springfield to a loss for the fourth straight time in a 6-2 decision. Six players lit the lamp for the visitors as Bridgeport banked two important points. Joel Hofer took the loss with 21 saves on 27 shots before being replaced by Vadim Zherenko, who stopped all five shots he faced in the third period. Cory Schneider earned the win in goal with 41 stops.

Springfield got on the board just under two minutes into the game as Will Bitten scored his 12th goal of the season after a save by Schneider was quickly turned into a centering pass to Bitten with enough space in front of the goal to put the Thunderbirds ahead. However, the lead would be short-lived, as Aatu Raty tallied his seventh goal of the year after Chris Terry drove the net and fed Raty for the goal. Terry added a pair of assists for his 25th and 26th helper of the campaign to give him five goals and nine assists over his last 12 games.

The game took a turn in Bridgeport’s favor when Jeff Kubiak stepped up in his own zone on the penalty kill and stole the puck at the blue line, skating it forward and burying a shot past Hofer to put the Islanders in front. The Islanders turned on the heat in the second period starting with William Dufour’s 13th of the season. Bridgeport took the puck in transition, with all three forwards on the line chipping in towards the goal as the puck returned to Dufour, who tucked it in on a nifty move that stood up as the eventual game-winner.

The Islanders then rattled off three goals in less than five minutes from their own end as Schneider earned his win with double-digit save counts in all three periods and made a key stop ahead of the fourth goal. Like their other tallies, it started with strong play in the neutral zone by flagging down a lob pass, carrying it back in, possessing the puck, and finding a scorer as Cole Bardreau finished the play by burying his tenth goal of the year. The Islanders followed that goal three minutes later as Ruslan Iskhakov scored on the rush at a hard angle. Bridgeport capped off a stretch of six straight goals with a tic-tac-toe passing play for Arnaud Durandeau, as Iskhakov capped off a first-star performance with a goal and two assists.

Springfield, to their credit, didn’t back down in the third period despite the score, outshooting the Islanders by a 17-5 margin and tallying once on Schneider late with Matthew Highmore’s eighth of the year. It ultimately proved too little, too late, as the Thunderbirds lost by a 6-2 score for the second consecutive game.

Springfield has allowed 17 goals in their last three games after losing a pair of games to the Hershey Bears over the weekend, and it’s impacted the standings, too. Two points in this game would have brought four teams into a tie at 37 points in the bottom four spots in the Atlantic, but instead, it’s the Thunderbirds who remain in the basement while giving their idle opposition a game in hand on them. The tight standings reflect further on how impactful a losing skid can be on any team in this division. Springfield will try to right the ship with a trio of games against Western Conference opponents beginning Wednesday in Milwaukee.

On the other hand, Bridgeport might be on the verge of turning things around after breaking their losing streak with two wins over their last three games. The Islanders, who once stood as high as third place in the division, lost 11 games in a row and found themselves duking it out with the rest of the division for positioning, a cautionary tale for the rest of the league to show how a poor stretch can impact a team. However, with half the season to play, third and last place separated by seven points, it’s anyone’s guess as to how the final standings board will look. Bridgeport is idle until Friday, when they play host to the Rochester Americans.